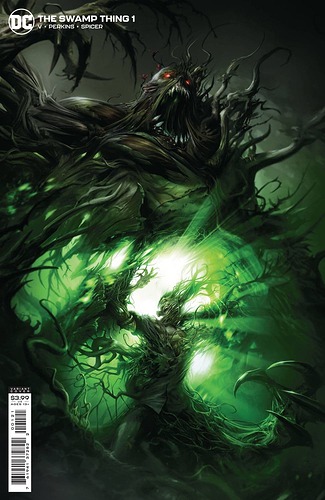 I don’t know about you but I really enjoyed all of last week’s books. First I read the first books of Rotworld and they sucked me into the Rot and Red. I am ready to continue our journey into the Green this week. Then Man-Bat snuck up on me, being honest here, I wasn’t expecting too much. I especially liked the way the book went into horror tropes while doing it’s own thing. @LaserPuff and I would like to welcome our newest member, @jbullins.2129! I hope you enjoy your stay in the House of Horror but I am afraid the Rot is taking over.

This week we are going to continue our celebration of New 52’s 10-year anniversary with a new set of books from the amazing Rotworld storyline. If you haven’t read this crossover, I strongly suggest going back to HoH 40 and jumping in the conversation. This week we will be exploring the Green Kingdom and I can’t wait to dive into these books.

Not only are we exploring Rotworld, we will be reading the first issue of The Swamp Thing! I have been reading this book as it has released in stores, to no one’s surprise, I am enjoying it. Ram V, who also writes Justice League Dark, is doing a bang up job with Swamp Thing. 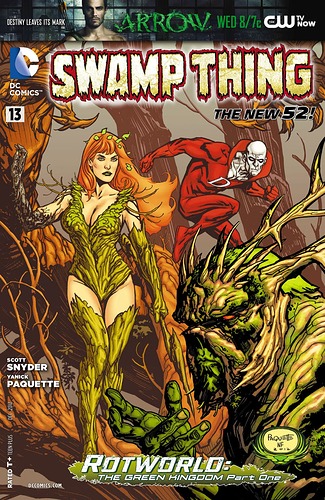 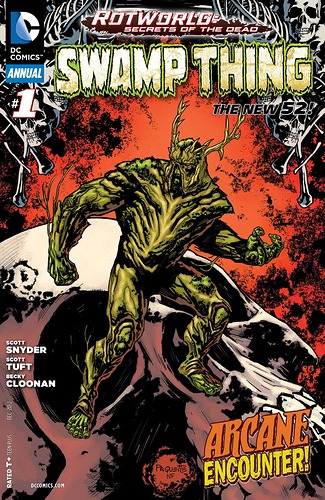 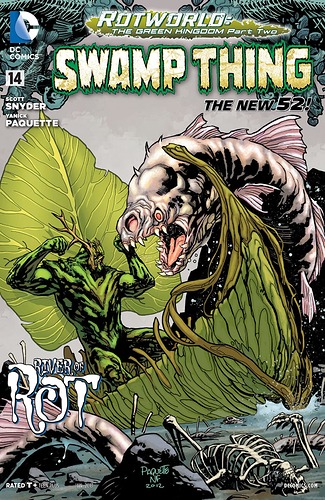 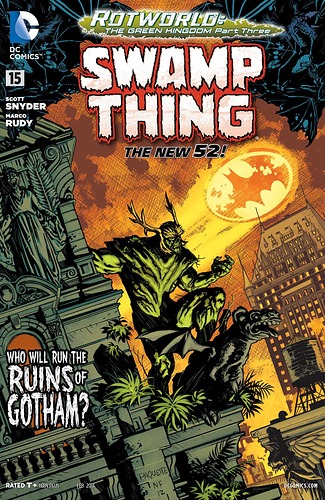 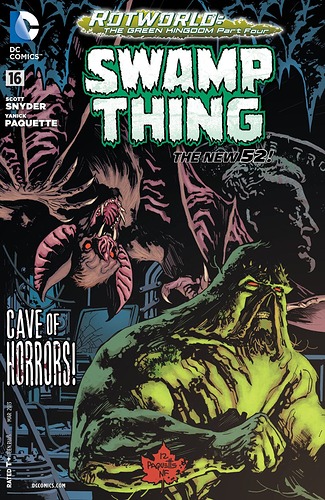 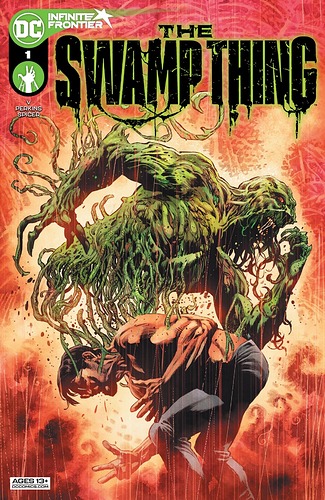 Don’t forget to let us know your thoughts on this week’s books! 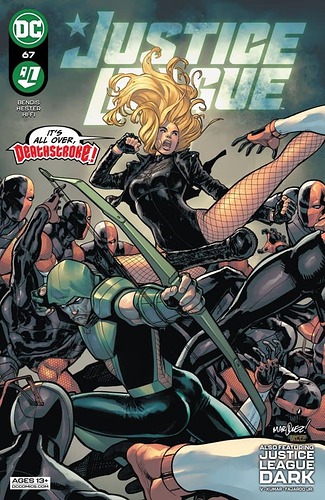 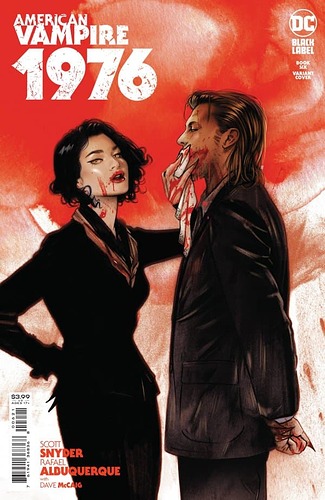 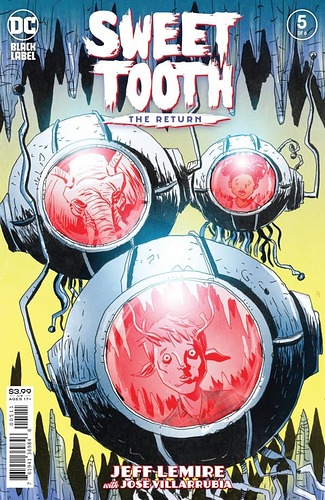 Generally speaking, I prefer Swamp Thing over Animal Man by a fully-stretched-out Plastic Man and then some.

For The New 52 however, Animal Man absolutely takes the prize. That volume of Animal Man is my all-time favorite to star Buddy, and it was also one of my favorite titles from The Dark ('sides me, does anyone else know all 7 categories the Wave 1 New 52 titles were categorized by?), along with Demon Knights.

I really want to re-read Rotworld, because I didn’t think too much of it when it came out.

Sure, I liked it. It’s just that at the time of its release, my reaction wasn’t more than “It was good, and I liked it.”

That was due to my reading every non-Vertigo book from DC in singles at the time of Rotworld’s release.

When you read that much (plus oodles of Marvel trades then, as well) something’s just bound to slip through the cracks, and Rotworld was said something.

Due to the other New 52 stuff I’m hip-deep in, I might have to get back to you later with my full thoughts on the crossover, @darkstarz.

It is funny you mention the different categories. In the early days of HoH, I decided to look up how Dark came to be. There is little to nothing about this category. It is a lot easier to find the Batman, Superman, Justice, and the others.

I do think Dark, while appreciated, was the throw away category for DC. An example is that the Amethyst comic was in the Dark category. I guess, she is magic and stuff so it works? At least, with Demon Knights, it sort of made sense.

Agreed on Amethyst, as there wasn’t too much that fit The Dark category, and really, it would’ve been a better fit for The Edge.

Not that it was edgy, but it also wasn’t that dark, either.

I wonder if @CassTheStreet has read Sword of Sorcery?

Going back to The Dark, I’ve been re-reading Demon Knights. In part due to it being one of my top 10 New 52 titles, but also due to it and The New 52’s big 1-0, and the worthy of Merlin’s magic Demon Knights Etrigan figure that McFarlane Toys just released in their DC Multiverse line.

I’ll be checking out Justice League Dark towards the end of this month in the JLBC. That, Animal Man, Demon Knights and Swamp Thing are my favorites of The Dark.

I have never gotten around to Sword of Sorcery shockingly. I created a list for comics I want to try to read in the next year recently from the app and it was on there, so hopefully I get to it sooner rather than later.

Sword of Sorcery is amazing!!!

does anyone else know all 7 categories

They really caught my attention with the New 52 categories of books. I liked the idea of cordoned sections of the universe.

I have just finished the Rotworld books this week and I think I am leaning towards Animal Man being the better New 52 horror series out of the choices in this week’s poll.

The first strike against this week’s New 52 Swamp Thing reads was the Annual. First, it slowed down any momentum from issue 13. Second, it was an origin story. I strongly dislike origin stories and I feel like that was what issue 0 was for in the New 52 line. The meeting of Abby and Alec was nice and all but completely out of place in the greater scheme of things. I felt like it was a shame that Poison Ivy was misused to help tell this story.

While I can criticize things, I want to point out the positive features. First, Babs Gordon! She was a shining light in this story. I am also enjoying Alec Holland, while I don’t like origin stories, I do like his journey as he searches for Abby. The artwork is very uneven but when it is great, it is GREAT!

Now onto The Swamp Thing by Ram V. I have enjoyed everything I have read by him. He introduces a new avatar for the Swamp Thing. While I think the first issue is kind of slow, that is only because I have read the rest of the series as it is released and knows where it goes.

Animal Man sections of Rotworld are amazing. I love the Swamp Thing section when they (Swampy & Abby) search out Gregori. That whole walk about is amazing!!!

The first strike against this week’s New 52 Swamp Thing reads was the Annual. First, it slowed down any momentum from issue 13.

I generally dislike annuals. They almost always mess up the flow of the series and almost always confuse me. The first time I read New 52 Swamp Thing I liked the annual issue, it helped fill in some of the context since I had never read Swamp Thing before.

It depends on the annual. Some of them are just longer versions of the monthly book and keep the pace moving. Then there are others like Swamp Thing that seem silly considering they just had issue 0, where origins were supposed to be told.

This annual wasn’t that silly. It wasn’t like they went back to the cabin where he died. It did explain how fate crossed their paths and how the Parliament had their eyes on Alec Holland. For those who have a thing for relationships and fate it is a sweet thought. Also I believe it was to try and make the fact that Arcane murders Abby more impactful.

I love Annuals…no surprise huh? haha. I do have taste tho. I love just about anything DC. But, I’ll only recommend ones I know are worthy of reading. To the best of my abilities, seeing as I can’t predict everyone’s opinions, likes, dislikes etc.- I wouldn’t recommend something that anyone might like. Only ones they should love. I do my best to find that fine line of what’s good, &, what’s great!!!