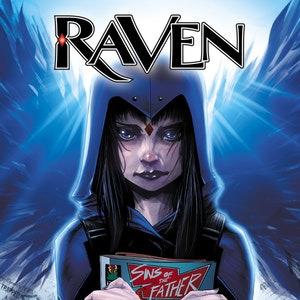 I must apologize for posting this a day late. My week kind of spun out of control and then last night I realized I didn’t have time to make this week’s post. With that said, I won’t be including the upcoming horror books this week and next week everything will return back to normal.

After last week’s turn into The Unexpected, we are going to keep that superhero vibe alive with Raven from 2016. Raven was written by Marv Wolfman who worked on the legendary New Teen Titans and Teen Titans books from the early '80s with George Perez. If you haven’t read those books, I definitely suggest and personally consider those comics to be the best team book from DC…EVER!!! 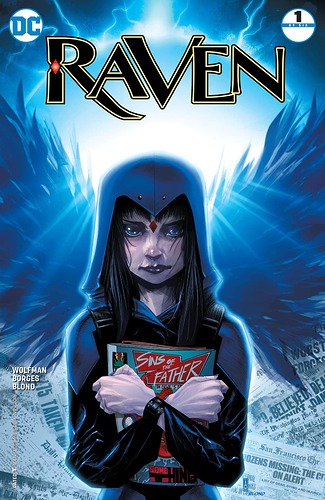 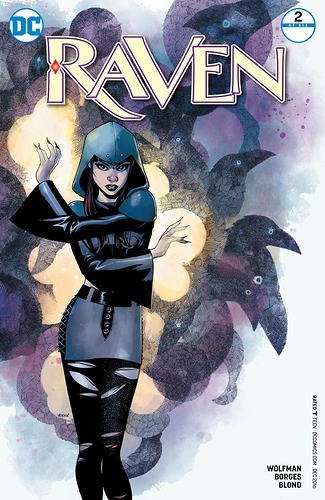 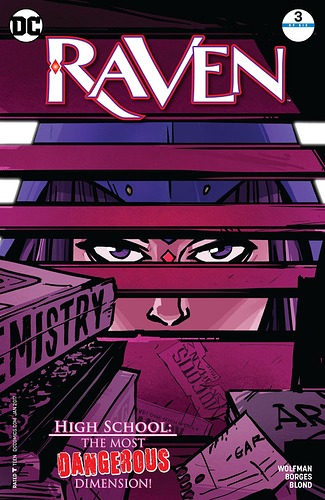 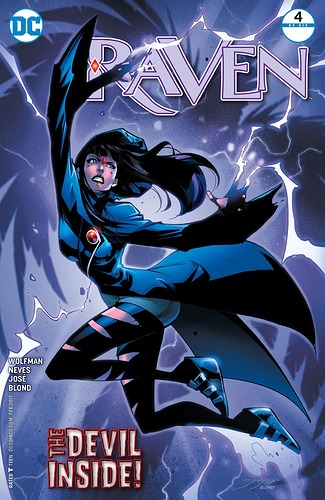 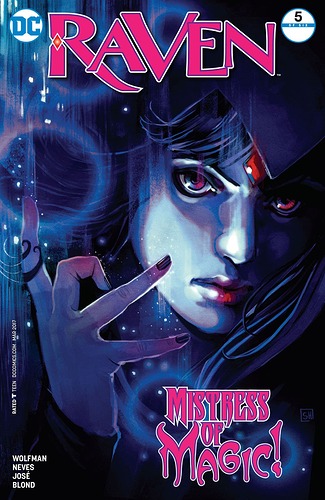 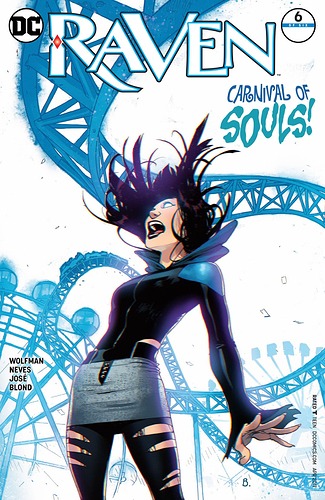 Don’t forget to let us know what you thought of Raven!!!

Before I let you get to reading, did you see there is a DC Horror book coming the same day as it is released in stores? 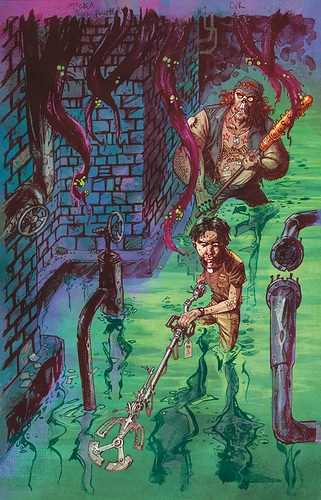 Not only are we getting Soul Plumber, but there will also be a new Hill House series!!!

DC’s HILL HOUSE Returns With ‘Refrigerator Full of Heads’ Expanding The Lore of ‘Basketful of Heads’ In A Glorious, Grindhouse Tale

This is seriously a great time to be a DC horror comic fan. We have also learned that The Conjuring: The Lover 1 will be released on DCUI in August!!!

Next week we will be back at full capacity and I can’t wait! Until next time, I hope everyone is remembering to put on sunblock and using your traffic signal whenever you make a turn.

Below is what @tomphoenix663.88164 had to say about Raven in the direct message:

I read the books. (I’m a terrific speed reader, really came in handy with cramming for finals)
It was really good. Raven is one of my favorites as Marv and George really brought her to life in the og Titans. Her constant struggle with the light and the dark was very compelling and it was great to see it in the 2016 miniseries you suggested. The juxtaposition between her family’s religious beliefs and Raven’s actual experiences with Trigon was very well done

. I was glad to see that Marv hasn’t lost a step with her.
Trigon is such a horrific terror, he could be such a major DC adversary in the mold of Darkseid. I hope they explore that in future stories. (Don’t ever read his RePG stats lol)

I read this a while back for the OG DC Book Club and from what I remember I thought the stuff with Raven and her newfound family was really cool, but the mystery about the carnival(?) was…just kinda there. Like, in theory it was cool to see Raven deal with something that wasn’t related to Trigon but it would have been cool if it was something more related to Rachel’s family.

I enjoyed this story a lot. I liked that Raven drew power from others to defeat the villain. Also interesting to see her adjust to life as a “normal” teen. It would have been nice to get some sort of explanation of what the “white” was, but I still enjoyed the story as a whole.

I absolutely loved this (of course). I thought every solo title Raven on here was excellent?!?! Excited about the new Hill House. Haven’t read a miss yet? I’m doing 24/7 Olympic Games too just fyi. Catching up on messages today & might read a bit- But, I will be watching them til they end as always.

I enjoyed the series to an extent. The art was great, the writing was vey good. I liked all the secondary characters. Though I didn’t like that she essentially forced them to be her friends. I wish there was some explanation about the carnival and why the white picked that method to torment people.

I liked Raven’s relationship with her extended family. The well intentioned Aunt, the curious cousins, the cardboard cutout Uncle. I like how their relationship grew after her “secret” identity was revealed.

I am not too familiar with Raven outside of Teen Titans Go but I was hoping for something a little darker. I want to see a similar series but she visits her Aunt on her fathers side.

No fault of their own but I am pretty much over the whole teenager story scene.

To cleanse my pallet I read the final issue of Dceased Dead Planet. That was a really fantastic series. I totally want more.

I was happy that she finally found a solution. She was starting at that wall for what seemed like forever, trying to do it all herself.

Is this story supposed to take place early in her time with the Titans? She didn’t seem to be fully in control of her powers.

From what I can remember all the Raven solos she was still in the Titans. Whether it be high school or just hanging out she’s (I’m pretty sure) a Titans member in all I believe. Been a yr maybe since I’ve read em.

@tomphoenix663.88164 I am totally jealous of the speed reading ability. I’ve tried a couple times but my retention is terrible.

You clearly like a lot of the Olympics but what’s your favorite of the sports? I enjoy the swimming events. The field events, shot put, javelin and discus are pretty cool too.

Believe me. It took lots of doing and practice but it helped SO much in college when I was earning my degree.

That’s cool, it says that TimDrake was dead at the beginning of the first issue wonder what caused that?

Could have saved my bacon a couple times in life. I am curious how you speed read comics though so much detail of a story is hidden in a panel, sometimes I’ve had to go back since I knew I missed something.

Well, I used to play a lot of video games (I am such a geeky nerd lol

) so I notice small details very quickly-it pays off in games by noticing a health item or ammo hidden in the background, so I tend to absorb details.
Naturally, the amazing artists put so many great little touches that I too often go back and just scan the panels after I finish the story. Adrian Sayaf puts a ton of details in his artwork, like mud on the boot soles, that I appreciate. Ivan Reiss is another insanely detailed artist and I can’t neglect the master George Perez. The artwork is so awesome.

Though I didn’t like that she essentially forced them to be her friends.

Raven does have a history of doing that though… 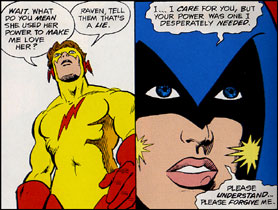 Is this story supposed to take place early in her time with the Titans? She didn’t seem to be fully in control of her powers.

It basically takes place between the Teen Titans book during the New 52 and the Rebirth relaunch, from what I understand.

it says that TimDrake was dead at the beginning of the first issue wonder what caused that?

That happened during the first arc of James Tynion IV’s run on Detective Comics, which I highly recommend, BTW, a great run in general.

Thanks for finding out all that stuff for me! I appreciate your expertise in the subject.

That happened during the first arc of James Tynion IV’s run on Detective Comics, which I highly recommend, BTW, a great run in general.

If it is as good as his writing in “Nice House on the Lake” and “Something is killing the Children” then I’m sure it is.

I enjoyed this story. It felt like 80s Raven, considering Wolfman wrote this it makes sense. The art was very hit and miss for me but that could have been because I was missing Perez artwork.

One thing that popped in my head while reading Raven was that it followed the horror movie rules, minus the killing. The last 2 issues were a mix of Nightmare On Elm Street with hints of Final Destination, on a grander scale. Of course, Under The Dome came to my head as well. Granted, that is one Stephen King’s sci-fi stories, it did have horror elements.

Man. That’s such a loaded question for me. I love everything. I’d say swimming, track & field, beach volleyball, judo, gymnastics, boxing, & I’ll stop there so it’s sort of narrowed down or else I wouldn’t stop lol. I do have to add that it’s so awesome that skateboarding, Surfing & BMX are now Olympic events. I truly watch it all tho. I’ll try to have a more condensed list when the Winter Olympics come around on my favorite Winters Olympic events…I like the new wall climbing too. They look like actual superheroes in the speed rounds when they scale the wall like the scene from Men In Black.

Ty @Jay_Kay & sorry @LaserPuff I’ve literally (& I mean literally) haven’t been on since last Tuesday b/c I’m doing nonstop Olympics around the clock. I had to dip in today tho cuz my messages we’re getting out of control from being gone so long. Plus, EARLY RELEASE TONIGHT FOR THE SUICIDE SQUAD 7pm EST!!!