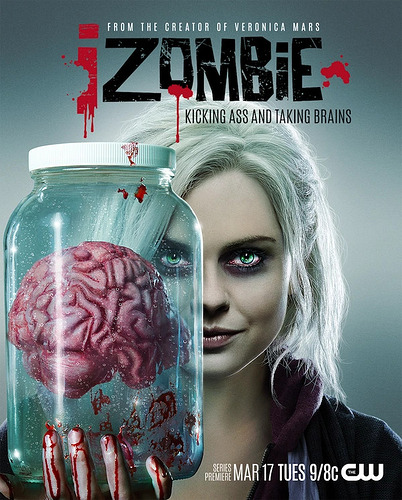 As House of Horror is about to turn 2 years old, @LaserPuff and I thought it would be fun to try something a little different. Using the same format as our reading club, we will watch and discuss iZombie season 1, episodes 1 through 6 on a biweekly schedule.

Places you can watch iZombie:
Netflix

If you would like to join our conversations about iZombie check out the links below!

Don’t forget to tell us your thoughts on iZombie! Do you like the comic or TV version better?

This is a good series, it does not take a whole lot from the source material but it is fun and quirky.

I just finished the pilot and already turned on episode 2!

I don’t usually binge shows, but I can see me doing that with this. It has elements of my favorite things, police procedural, mystery, and a twist. I am actually liking the zombie brain eating being the helper of solving crimes. As I finish the first 6 episodes I will comment more. I am thinking of reading the comic now as well.

The comic is very different from the show. There are elements that are similar but in a Stephen King movie and Stephen King book way, looking at you The Shining.

Love this Show! My first exposure to it was the show. Became an instant fan of that actress! Enjoying Ghosts on Paramou. Just because of how much fun iZombie is!

The first season of that show is excellent! 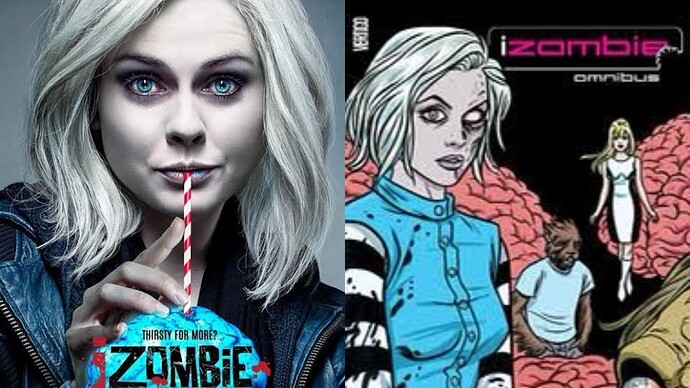 How was DC's iZombie comics different from the show? Changes explored

iZombie premiered on the CW Network in 2015, and the show ran for a total of five seasons. Based on a DC comic book series of the same name, iZombie featured the journey of Olivia "Liv" Moore.

The one thing that I do find interesting is that Liv looks like the live action version of Gwen.

Oh, and did anyone else notice Liv’s name. Olivia “Liv” Moore. Like Live More. Thought that was kind of funny.

I do wonder why DC/Vertigo comics become police procedurals with the comic twist. Both, iZombie and Lucifer went down this route.

I am on the 3rd episode and enjoying the show, as I have every time I have watched it. Even with the differences from the comic, I love the characters here. Liv is fantastic as a brain eating zombie turned detective. Yeah, that sentence makes it clear why this became a show.

It is so bingeable that I already finished these 6 episodes! This is a fantastic show. I may have also read the first 6 issues of the comic series last night as well. Different really doesn’t begin to describe it, but both are equally as good.

I want more of Liv’s roommate! She is played by one of the girls from Aly & AJ.

I may be really enjoying this and trying to hold off talking more until some others have gotten further into it.

I too have finished the first 6 episodes! I got lucky and it ended just as House of the Dragon was starting!

I actually picked up the omnibus for iZombie yesterday on ebay for under $60 with shipping. I love the artwork in iZombie the comic.

Also…the wereterrier is referenced in the show!!! Ravi plays an MMORPG and his character is a wereterrier!!!

One of my favorites!!! Love the Michalka sisters!!! A.J. was great on Goldbergs & Aly is great (& both smokeshows) in IZOMBIE. Great theme song too. One of the few I never ff. I like how they start with a comic panel, that then comes to life.

This is a great idea!

I enjoyed the series, even if it strays from the source material. I was just talking to someone about it - they haven’t seen it and they suggested a rewatch w/ me, so I’m sure I’ll have more to add soon as my memory refreshes.

I did it the other way. Watched it, then read it. So, it was an awesome watch but if I would’ve read it first? I can definitely see why going into it with the comic in mind might be a letdown?

Can’t wait for your thoughts! The first 6 episodes were a lot of fun. I completely forgot that Rob Thomas was the showrunner. He was great with Veronica Mars and this definitely has that vibe. For those wondering, no, it isn’t THAT Rob Thomas. Just keep watching…

WAL are great but my schedule is all sorts of weird (I never know if I am getting out of work on time or not) and this seemed like the next best format to watch stuff in a group setting.

Zombies in general are bad for me, but I chose to give this a try (thanks to my friend CassTheStreet.) I loved it. Only seen the pilot thus far but so far its very good!

Excellent!!! I completely blanked on that when I chose this series as the first entry. It isn’t like every other zombie show, although it does have those elements. Glad you enjoyed the first episode!

I can’t wait until the next part of this. Some additional comments that I have. Episode 3, finding Marcy alive, but a zombie was sad, even more so when they couldn’t get her to return to “normal” or like Liv. One of the characters that I enjoyed in these first 6 episodes was Jackie, but poor lady bit the dust very early on in the show. She could have been an interesting counter-point for Blaine, but I think it would have weakened Blaine as the main antagonist/whatever he is at this point in the show.

The comic book is way different, I have read about 19 of the issues of the 29 on DCUI. I was happy with the nod to the were-terrier in one of the episodes. This isn’t blurred because it is mentioned above. There are very little similarities at all. Even the character name and their job is different. The entire focus of the series also feels different at this point. We will see though as it progresses if that stays the same or not.

This series so far seems very intelligently casted. I am hoping for more of her roommate though. I also love that there is a “mystery” basically to solve each episode. It helps to keep the show moving, but it is interesting to see another thread developing for story in terms of Meat Cute shop. Can’t wait to see what develops there. Is the plan to watch six episodes every 2 weeks? If so, I will have to try to stop myself from watching more of this.

Actually, next week will be 7 episodes to finish the first season. Then I figure we will leave it up to a vote to continue to season 2 or move to another series for a season. Personally, I think it would be great to finish one series before moving to another but variety and what not.

*slaps forehead You mentioned this actually that we were finishing out this season. Sorries! I think my vote would be to maybe mix between two series for variety. Finish one season of a show then go to another one then back to the other and back and forth basically until one is finished, then insert new show. Just my opinion.

I disagree. I doubt i’ll wait to watch s2 that long. One reason is due to CW shows having cliffhangers.

I still haven’t finished this show, so this might keep me motivated to catch up.