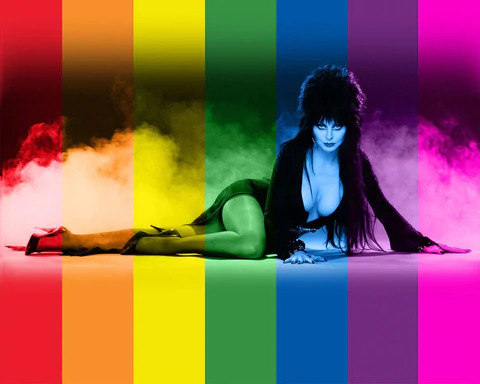 Before we dive into our reading selection @LaserPuff and I would like to welcome the newest members @ralphsix, @stefanie.m, @Nativecrasher.1986, and @MaxRoboto to the House of Horror! I would say you can sit on the couch but that is reserved for the Mistress of the Dark.

House of Horror is jumping into Pride by finishing Elvira’s House of Mystery! We have read issue1 way back on the very first House of Horror! Then we joined forces with Harley’s Crew when we read issue 2. It took us a while to revisit Elvira’s House of Mystery but when we did we read issue 3, the first comic without a Comic Code stamp from DC! Not only is it Pride and sure, Elvira Cassandra Peterson has recently come out in her autobiography released last year. Elvira has just celebrated her 40th anniversary! (sidenote: Elvira debuted in 1981 but for whatever reason, the celebration is going strong into 2022 with Dynamite releasing Elvira’s Dead this week…then again that shouldn’t mean too much considering Dynamite didn’t release an Elvira comic in October 2021 even though they had an Elvira series happening at the time…) 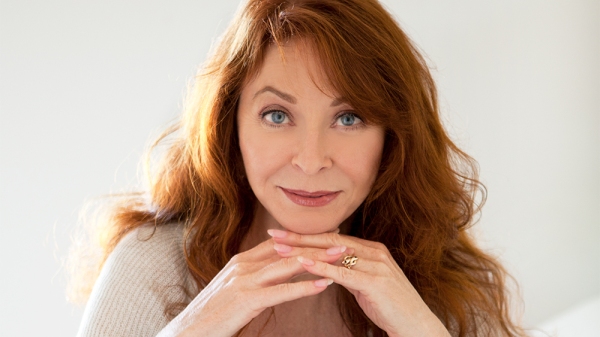 Elvira, aka Cassandra Peterson, Opens Up on the Freedom of Coming Out: ‘I...

To many, Elvira is the horror hostess who gained notoriety in the 1980s with that signature fitted black dress, raven black nails and stark red lips. To her friends and family, she is simply Cassan…

Oh yeah, did I mention Cassandra Peterson was the first person named in the Logo30 this year? 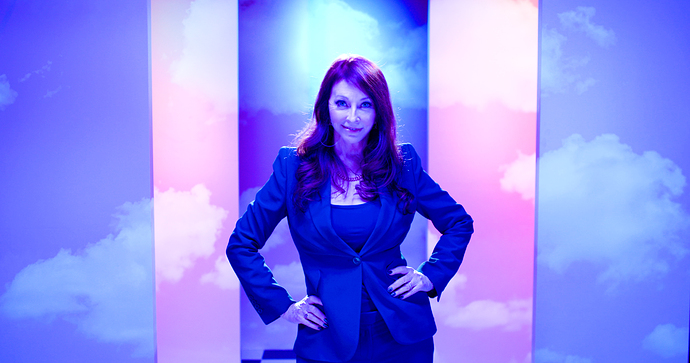 "Talking about my relationship with my partner was a huge, huge relief," says the Elvira icon. 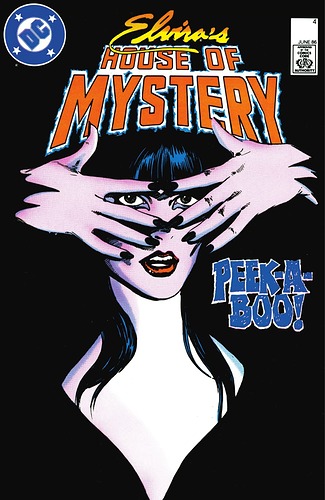 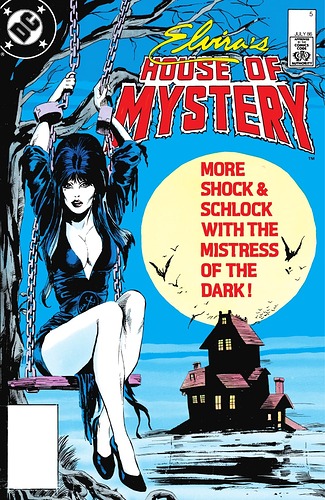 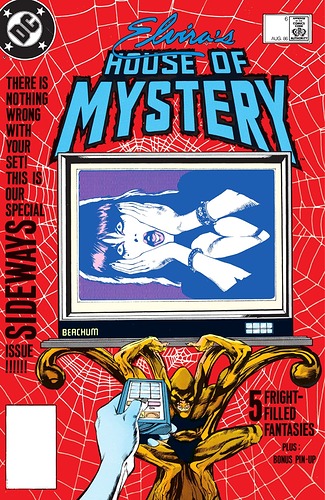 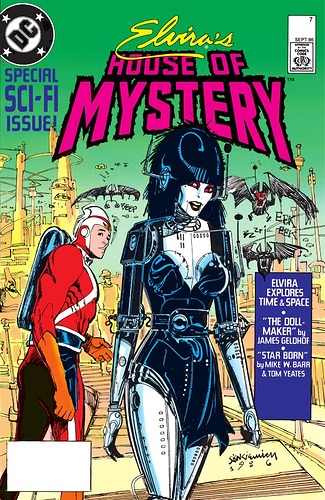 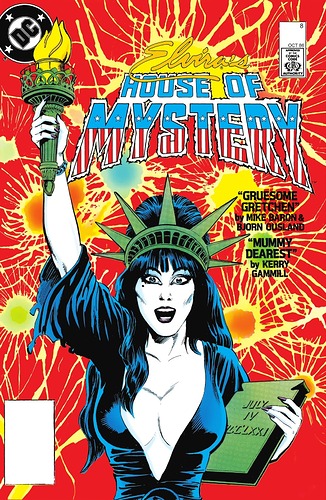 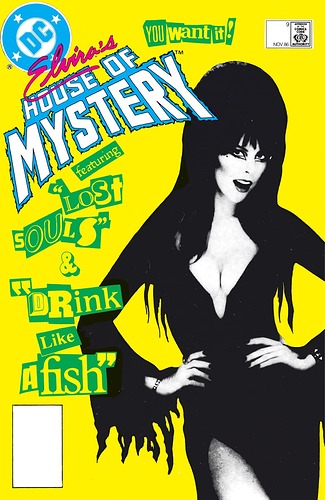 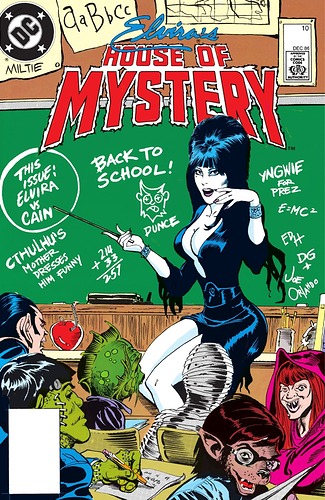 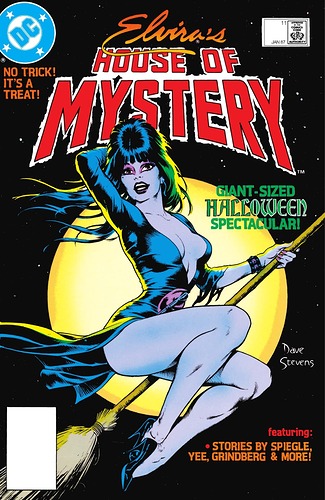 Don’t forget to let us know your thoughts on Elvira’s House of Mystery! 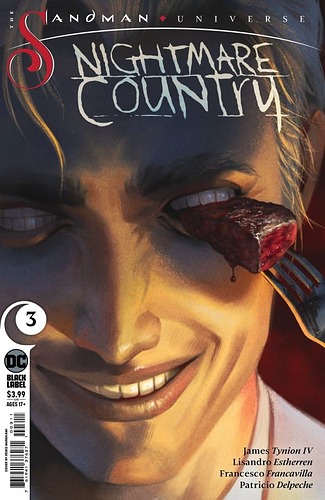 You must be a House of Horror member for these EXCLUSIVE Elvira digital goodies!

I am having an Elvira day apparently. While reading the above-listed comics I have Elvira’s 40th Anniversary, Very Scary, Very Special Special that aired on Shudder. I will say that it is weird to see a movie from the 60s black and white in HD with Elvira hosting. (The City of the Dead starring Christopher Lee is the flick that’s on right now).

As these are anthologies I don’t think I can do a simple overview so instead, I will do highlights from each issue.

I read issue 4 yesterday in between chores and meeting up with a friend for an Ollie’s comic run and then grabbed a pita and falafels. The first story was okay but really didn’t stick with me. The second story was a lot better and kind of what I have come to expect from Elvira’s House of Mystery. If you didn’t have Rockwell’s classic tune in your head while reading that story, you did it wrong.

Issue 5
I enjoyed the intro with Elvira and honestly wish we would get more of her bickering with House of Mystery in these comics.
The first story was funny in a slapstick cartoon kind of way. I mean, the guy was a drunk and a complete butthead yet somehow came out on top…until the very end.
The second story had vibes of House of Mystery’s past and that isn’t a bad thing. There was romance and ghosts and dragons. This might be my favorite issue of Elvira’s House of Mystery that I have read up to this point. Both stories along with Elvira’s jokes all seemed to come together for a fun read.

Issue 6
This is a longer issue but it also lets us know what the House of Mystery sounds like! 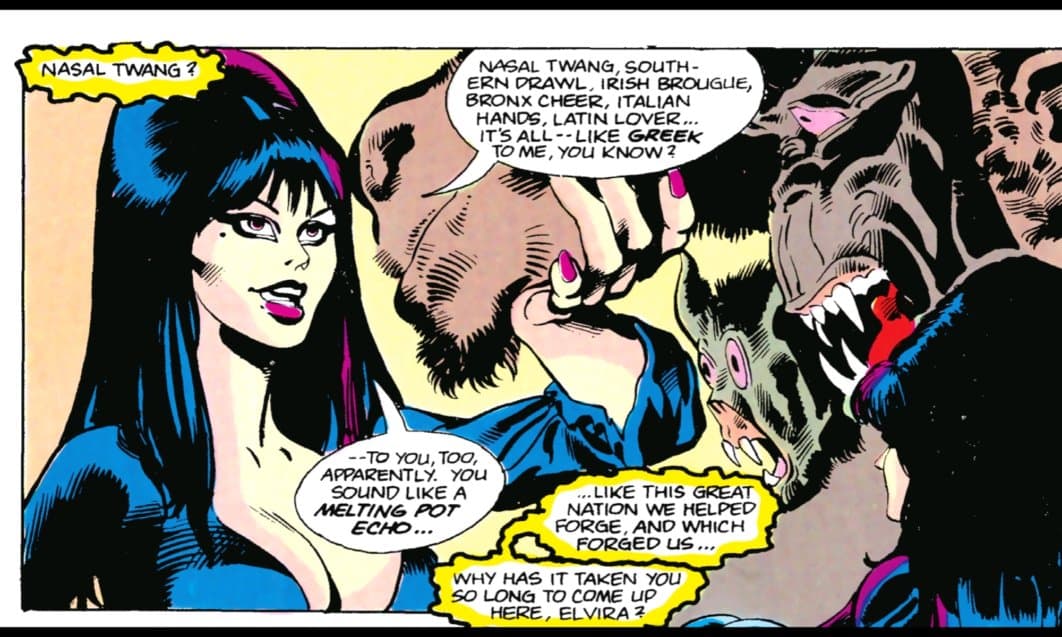 This picture instantly brought back memories, my first baseball game (Indians vs Angels - Indians won) was at Cleveland Municipal Stadium and was the only football game I have attended (Browns vs Oilers - Browns lost).
Calling @capo-mage, @LaserPuff, and @TravisMorgan for this Cleveland joke. 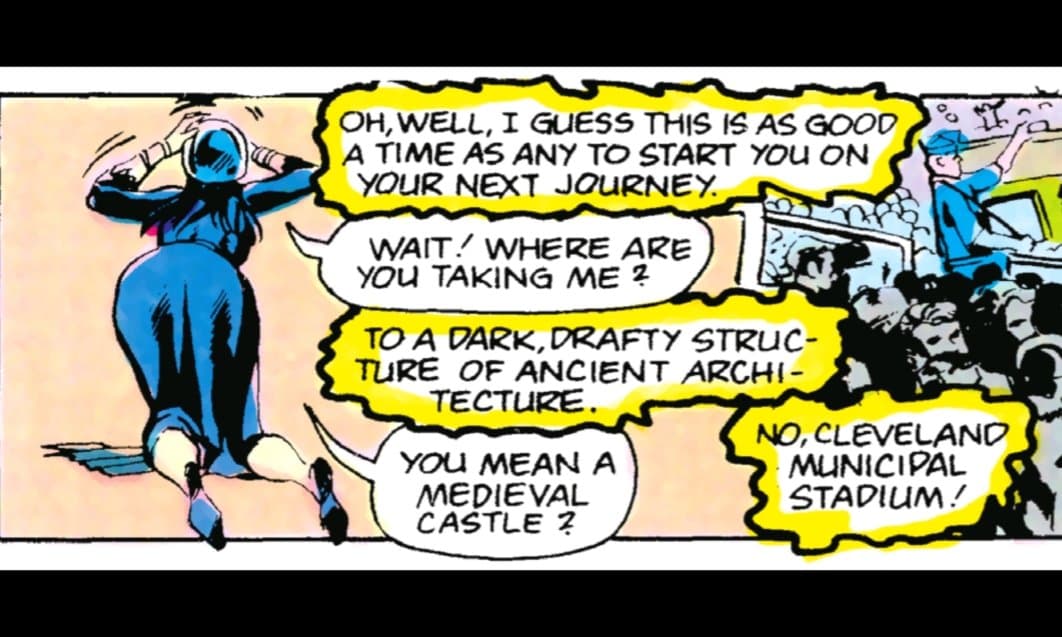 image1062×637 86.5 KB
Sadly, the above is the last of my enjoyment of the first story. It is a grim reminder of 80’s culture and openly anti-LGBT messaging. (Yes, there is a certain amount of irony here considering we are reading this comic for Pride…) On top of that, the first story was just a retelling of A Connecticut Yankee in King Arthur’s Court but replaced the main character as a New York Yankee… Not the best and this really makes me wish that the last issue’s fun was carried over. Maybe the next story will be better?

The second story was a lot better. This also might be the darkest story in Elvira’s House of Mystery to date. A man in a catatonic state believed to be dead and then well… He got his just deserts.

The third story was pretty fun. Anytime there is a weird cult in a horror story, I am down.

Story number 4 shows the horror of greed. Not great but not horrible.

The last story was one of the more original concepts I have read. Even more interesting, the main theme is acceptance. “I’m different! And there’s nothing wrong with that!” It is like a complete 360 from the first story.

I love Elvira and especially her classic 1980s movie! The Crew did a WAL of it not long ago which was tons of fun and I just posted in the Crew thread a video retrospective of camp cinema which talks about the movie, amongst others.

On her Shudder 40th anniversary special she hosted her first movie! I haven’t watched it yet because I want to actually pay attention to it. If you don’t have Shudder, I do suggest just snagging AMC+ because it bundles Shudder as well as other streaming services like Sundance into one app. Have you seen her other movie?

Aah, Cleveland Municipal Stadium, not a good seat in the house.

I-Beams scattered throughout so there was a good chance you would wind up behind one. Built for the 1936 Olympics (that went to Germany) for track & field and seating 80,000 people all the seats were far, far away from the field. It seldom or never sold out so we couldn’t see any home games on TV.

I really remember the distinctive smell. I have never smelled that smell anywhere since. I can’t say it was a good smell but it was definitely helped define the Indians in my head at the time.

Have you seen her other movie?

More issues are being read and that means more thoughts!

Issue 7
The first story was okay, it did have flying cars so that might have bumped the enjoyability of the story for me.

The second story returns to a theme of love that cannot be. This seems to be a common theme in these anthology horror comics ranging from Black Magic to House of Mystery and everything in between.

This was a science fiction issue which I thought was a nice homage to what House of Mystery became after the comic code.

Issue 8
The last Elvira spot gives a to be continued and I am getting excited. Is she getting closer to finding Cain?

Issue 9
This might be my second favorite issue in this series. The second story had a twist I wasn’t expecting. I also liked the continuation of Elvira vs Cain.

Issue 10
The stories are alright. However, the real highlight is we finally get a confrontation with Elvira and Cain! This comic breaks down the 4th wall as they talk about letters to the editor regarding theories of what happened to Cain and the fact that it is Elvira’s comic now. This kind of thing still takes place in modern comics.

Issue 11
This is the last issue of the series, if you don’t include the special that was released months later.

I really liked this one. It was cool seeing all of the old comic hosts and the cheap shots taken at DC. 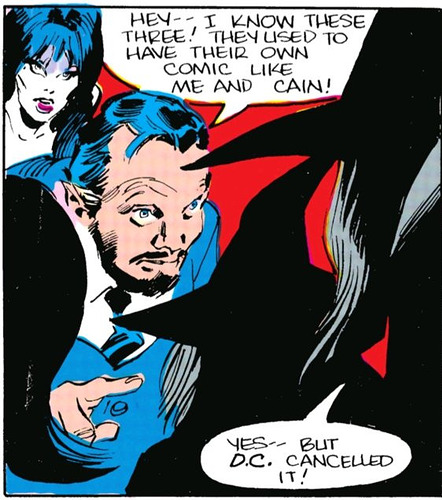 image563×636 101 KB
The last story was probably my least favorite thing about this issue.

Overall, I enjoyed this series. It isn’t always great but it is fun.

Elvira’s Haunted Hills is a departure from Mistress In The Dark. Instead of 80s camp, we are treated to Hammer Film schlock.

This movie was out of print for a long while and to buy the movie could have cost $100 or more. They finally re-released it on blu-ray last year. I happened to pick it up while I was hanging out with @LaserPuff at a horror convention.

This can also be found on digital services to buy, not sure if it is on a subscription service yet.

…Also, I’ve been meaning to come back to this series since more issues have arrived.

Did you ever see Elvira’s Haunted Hills? I haven’t seen it in like 20 years, but thought it was funnier than Mistress. Regardless, can you ever go wrong with Elvira? I mean, even Scooby Doo had her in a movie…

If I can find it on streaming I definitely will!

Happy to report, according to Google, it’s free with ads on Pluto TV!!! I also bought it a few months ago on Vudu, so you might want to keep an eye out for the sales. I think it was$5 when I got it.

She was in 2 Scooby movies as Elvira and a Lego Scooby movie as a character that might as well have been Elvira! 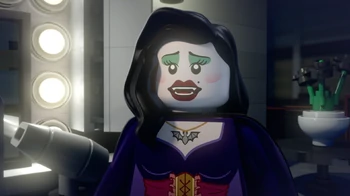 I also bought it a few months ago on Vudu

Vudu has a goldmine of Elvira content. Oddly, they don’t really have much of her original series but I was able to pick up the series she did for Hulu that were all Full Moon movies. I believe that also had Night of the Living Dead, the only non-Full Moon movie, which she has done in each of her shows outside of the Shudder 40th Anniversary special.

They had another cinema wasteland recently. We should hit next time they do it.

I think they had a reality tv show. I think it was called, “so you think you can Elvira” or “Survivor Elvira”, “little people big mistress of the dark”, “pimp my Elvira”, “Elvira plus 8”, or maybe “queer eyeball for the Elvira”

That was the first one I have missed in a few years! I meant to look it up and I forgot to. I am hoping it is in the last week of October because I have that whole week off of work!

They did. The idea was for Cassandra Peterson to step down and the winner of that show to take over as Elvira. On paper it is a smart move, she gets money from the name, she owns Elvira, Mistress of the Dark, and a younger person can do all of the crazy Elvira stuff. What Cassandra Peterson didn’t realize was that SHE is Elvira. Sure, they can put someone else in her dress and wig but it isn’t the same but that doesn’t mean that person will have the same kind of humor.

I was surprised when I saw the announcement of the show. I felt how you said, if you are going to pull a Dr Who and swap out the character every couple years you have to start that early on not 30 years later.

I am not sure if it would have worked 5 years into it for her. She has a strong personality. Also, she is the main writer for Elvira. Granted, a stupid joke about boobs and a horror movie isn’t hard to write but it’s her voice.