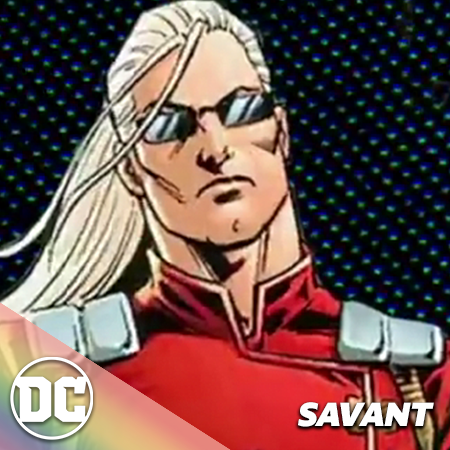 Pride Profile: Savant. This Gail Simone and Ed Benes creation debuted in Birds of Prey #56 as a one-time vigilante, turned to crime, turned back to vigilantism under Oracle’s direction. Genius, martial arts master, computer whiz with a facility for languages, Savant also has a chemical imbalance in his brain that effects how he processes information. That included the fact that his confident and bodyguard Creote was in love with him. Babs convinced Creote to tell Savant, and when he does they’re both surprised that Savant reciprocates. For more Savant, check out the upcoming The Suicide Squad movie.

For more Savant, check out Secret Six and the upcoming The Suicide Squad movie.

I think this should read Birds of Prey, not Secret Six. AFAIK, he was never in Secret Six, but was a regular starting with Simone taking over Birds of Prey in 56, as referenced. (The masked version of him also appeared in a handful of issues of the early New 52 Suicide Squad run.)

It is possible that you could be correct. Let’s dive in and find out.

You’re right and wrong. Savant does appear in Secret Six vol 3, #7. But, it’s probably a little misleading to suggest that’s where to find more.

Haha, fair enough. I suspected it might have been just a single “gang” shot, but he does have a line in there!

Out of context hilarity:

I will now suggest that the mistake was worth it to get that image in here.

I live to serve.

Wow. I had no idea he was gay. Guess he didn’t enjoy chaining Black Canary to a bed as much as I thought he would have.

Well, these are things you should know as an Ed Benes fan. He did pencil a heck of a BoP run.

I find it hilarious that in the comics Savant is illustrated as this younger beefcake of a guy, and when it’s decided to add him in a movie, who does writer/director use to play him? Michael freaking Rooker.

I guess I should but I stopped reading after Issue 80 cause thats where Ed Benes work ends. Maybe I’ll finish the series once I’m done with Resurrection Man.

It was something that was implied a bit in the Simone/Benes run, but is confirmed in the BOP relaunch that Simone and Benes did during Brightest Day.