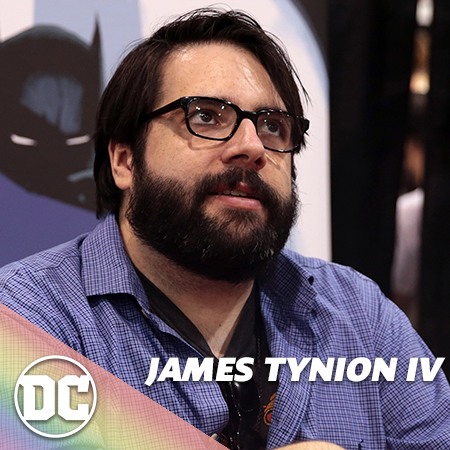 Pride Profile: James Tynion IV. You see the name Tynion on a comic cover and you trust it’s going to be good. Tynion earned that trust with his DC work on Batman comics, including the IDW Teenage Mutant Ninja Turtles crossovers, and an A+ run on Justice League Dark. Tynion can also be added to the growing list of successful writers introduced into the DCU by Scott Snyder. He has been nominated for Eisner and Harvey Awards, and won the 2016 GLAAD Media award for Outstanding Comic Book for his creator owned The Woods with IDW. Openly bisexual himself, Tynion enriches his stories with representation across the spectrum, including Batman’s new rival Ghosthunter.

Tynion is solid. Haven’t read much of JLD but his batman and TMNT stuff is good.

To me, he’s like Simone. I see that name on the book and know it’s going to be a solid read

It’s always nice to a writer like that instills confidence.

Did you ever read a comic by him called Wayne or something like that (probably super wrong on the title)? I think it was by IDW it was a fantasy setting with a kid with blue/purple hair and wore a hoody I think. I have the first issue, not sure where it is in my Randoms long box.

Wynde? My daughter was reading that, I followed it for a bit, pretty good.

Yes that was it, thank you. Only got the first issue but it looked okay.

Read the first 4 I think. Really nicely done. She reads so many different things so I’m not sure she stuck with that series. Beautiful looking art, good story for kids about acceptance wrapped in a nice quest.

I’ll point her in that direction. We get my DC pull then search the indie shelves. I’ve fallen back in love with Dr Who comics, really enjoy Blade Runner, Crossover. If I’m going to explore a universe that’s not DC, I want it to be all fresh to me.

That’s one I didn’t know! Good for him and big fan of what I’ve read of his work (I absolutely LOVED batman & robin eternal)

Image’s Seven to Eternity and Low by R. Remender and Birthright by J. Williamson are pretty solid for alternative fantasy world settings.

More on the way, maybe there’s others you don’t know (big mystery). But, for me, for all these folks we highlight first and foremost they are awesome creators putting out fantastic books. Knowing something about who they are can only add to that appreciation.

Oh definitely! It’s just nice to know people like me are bringing me the stories I love