Where To Start Reading for Stephanie Brown/Cassandra Cain?

i’ve been enjoying Bryan Millers run of Steph’s batgirl and I saw that Cassandra was in it for a little bit after she quit as batgirl so I’m curious where to start for both of them. Any recommendations?

A really fun question! I’m more of a Steph fan than a Cass fan, but I’ve tried to build a few reading lists for them!

Here’s my list I made for all of the Batgirls, including Babs, Cass, Steph, and bonus Bette! 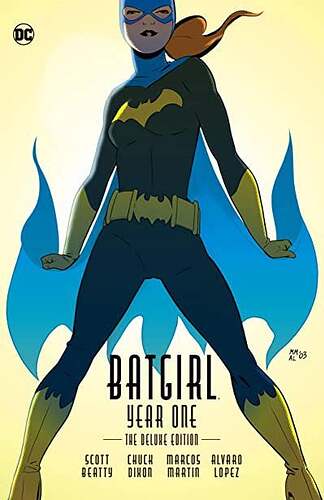 It’s a little out of date, but for a starting list, nothing has changed for me!

For Steph, I’ve built a series of chronological appearance lists here: Stephanie Brown Wiki | Fandom , under the Comic Resource Pages section, starting with the first Chronology. This is the exhaustive list, but it does at least tell you the first appearances!

There’s also the current title Batgirls, first issue should be hitting DCU here in a few months, which I’m enjoying!

Hope this helps! So glad to hear you’ve been enjoying the Batgirl Steph run!

I absolutely second the 1993 Robin solo title for the best Stephanie stories. She’s there almost from the beginning, and the whole series is great, so rather than jumping from Steph arc to Steph arc, I’d suggest binging the whole thing and enjoy Tim’s story arc as well, since they are (obviously) intertwined.

I have been curating Stephanie’s early appearances for the Renegade Robins book club. I will post the links to each thread below:

Note: This debut session for Stephanie Brown is appearing in the General Discussion – Comic Books forum as a special premiere, but most club discussions can be found in the Community Events – Fan Discussions forum. If you have not checked out that section of the site lately, be sure to give it a visit! We’re always looking for more engagement! [Spoiler] The Renegade Robins Club welcomes a new hero to the stage: Stephanie Brown, the Spoiler! This month, we are taking a peek at her classic orig…

[Robin 69 Steph] The Renegade Robins Club joins the wreckage of Gotham during No Man’s Land! And Stephanie Brown’s cover has been spoiled as someone discovers her secret identity! See what happens in this month’s adventures, and then share your thoughts below! Join the club today! Here’s our schedule: 2021-11-15T06:00:00Z (UTC) → 2021-11-30T06:00:00Z (UTC) Click the drop-down boxes below!

The posts also contain some background information to provide some context.

for Cassandra read Batman No Mans Land and the subsequent batgirl series and stop there because it only worse from that point.

Also, to maybe give a TLDR for the new Steph and Cass readers, both Steph and Cass have two origin stories, which were basically merged in Infinite Frontier last year (2021). Steph’s original origin story is Detective Comics 647-649, and Cass’s is No Man’s Land (there’s a great collection in the DCUI comics reading side). The updated origin for the n52 were Batman Eternal for Steph, then Batman and Robin Eternal for Cass. There’s much discussion about which is better, or whether only one is good at all - I like all four, in different degrees, and recommend all four. All four origins are more or less important for understanding the characters in the new Batgirls series, though you can of course start reading that on its own without reading anything else (though maybe reading Fear State Batman might help with a little of the direct context for some of the cases the girls are solving).

For Cassandra, I recommend Batman #567 & Detective Comics #734, her first appearance.
She pops up throughout No Man’s Land after that, but I highly recommend her Batgirl title (the first Batgirl to get a solo book, in fact).

While others have ignored their New 52 stuff, I’ll go ahead and mention them in case you want to look at it.

Stephanie was introduced in the New 52 during the weekly series Batman Eternal, taking one of the biggest roles in the story.

Cassandra was introduced in a similar weekly series that released after the aforementioned title called Batman & Robin Eternal, which Steph played a small role in too.

After that, both Steph and Cass were in the same team in James Tynion IV’s run on Detective Comics.

When that finished, the two briefly split off – Steph played a role in Brian Michael Bendis’ run of Young Justice, and Cass was part of Batman & The Outsiders by Bryan Hill.

Now, after showing up together in a few apperances crossing the other Bat-titles, they’re both starring in their own series together called Batgirls.

thank you for this it’s a big help to me for sure! but I’ve been reading batgirls as well so I’ve been obsessed with Stephanie as of late so again thank you!

Wait a minute! I didn’t ignore either of the Eternals!

Very happy to hear that you’ve been enjoying Steph! She is (as my icon suggests) my very favorite character!

I would never ignore the two Eternal weekly series! Batman Eternal is one of my very favorites - I’ve collected not only every issue, but nearly every issue that was a spinoff from it! And I think Batman and Robin Eternal is a better series than many give it credit for.

I just hope we have more people like INIGHTWINGI discovering Steph and Cass (and Babs!) in the new Batgirls series and hunting down their backstories! That’s what I love to see, as an archiver of Steph!

Now that I’m home, I’ll also throw in some links that will hopefully make things a bit easier, too!

Cass’s origin in Batman #567 (linking as part of the NML storyline, which will take you through the crossover more easily than linking the issue alone)