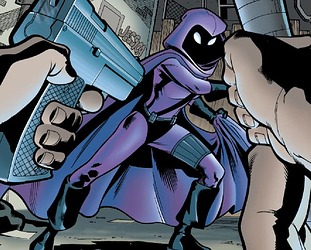 The Renegade Robins Club is just as annoyed as Stephanie that Robin won’t reveal his secret identity to her! Come on, Tim: what gives? As if she didn’t have enough problems with her lecherous uncle and an envious member of Young Justice!

Discussion Question: Chuck Dixon and company seem to love sticking Tim in love triangles. Do you find this approach compelling, or would you prefer that the stories focus solely on building a stronger relationship dynamic between Tim and Steph?

Should Tim reveal his identity to Stephanie?

Thanks for stopping by! See you in two weeks for more Spoilery goodness, @RenegadeRobinsClub! (That’s right! Two Steph sessions for the holidays!)

I love the title of this thread! Though it also might apply to her issues back when she first committed to being the Hero of the Suburbs, back in Robin #40

Also, definitely miss the Robin 80 Page Giant - get on that, DC! I am lucky enough to have stumbled upon it in a used book store several years ago, but its presence online was very difficult to track down to establish when it came out and where it fits in the timeline (thankfully, it has a pretty solid event - Jack Drake and Dana’s marriage - which can help a bit). It also is a really fun connection between Steph and Black Canary, setting up their later connection nicely.

Batman Chronicles #22 has the weirdest coloring error, turning Steph from a blonde into a…orangey-redhead-brunette? It’s a fun little story, a lot like the Showcase 95 #5 story from way, way earlier in her timeline. And it directly references that it’s the first time Steph has been out heroing since she gave birth - a nice little note.

Given that Dixon’s mentioned many times that Tim Drake’s trajectory is very similar to Peter Parker’s first decade or so of development, it makes sense that the love triangles would play a big part in his personal life structure. I don’t mind too much, though it definitely does set a pattern that would reap disastrous effects much later.

I really love Pete Woods’ art in this era, and his wife’s art in the upcoming era is also a big favorite!

Ah, but this is the sequel!

Batman Chronicles #22 has the weirdest coloring error, turning Steph from a blonde into a…orangey-redhead-brunette?

She was trying something new. It didn’t work out.

Given that Dixon’s mentioned many times that Tim Drake’s trajectory is very similar to Peter Parker’s first decade or so of development, it makes sense that the love triangles would play a big part in his personal life structure.

Okay, now I really need to see Steph greeting an astonished Tim at his front door while proclaiming, “Face it, Robin: you just hit the jackpot!”

Well, I firmly believe that Steph facing Tim and saying, “Face it, Boy Wonder, you have a bad case of the Stephs” is supposed to be exactly that moment. 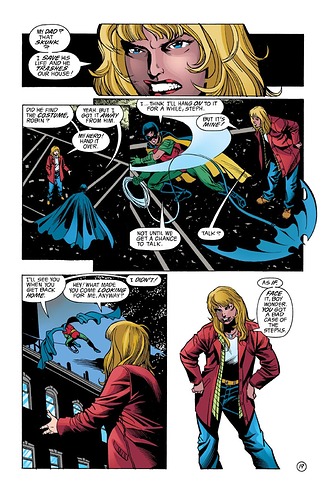 Ah, yes! I forgot about that one, but I definitely caught what Dixon was doing there.