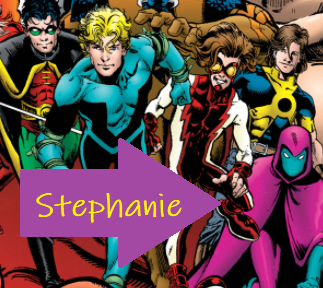 The Renegade Robins Club brings you another Spoiler-ific session! Stephanie continues to be caught in the middle of Tim’s love triangle, but she also gets an appearance in Teen Titans! (Okay, it’s a super-brief cameo, but she made it on the cover!)

Is Stephanie cut out to be a Teen Titan?

Thanks for stopping by! And if you want more from the @RenegadeRobinsClub, be sure to follow the adventures of Damian Wayne in Year of Atonement!

I have read more of Robin than these issues. Honestly, I don’t think he should be with either girl. If he can’t be honest with either of them, he shouldn’t be in a relationship. I know and understand his reasons for not being open, but keeping secrets will only lead to failure. If he were honest with her, then I think Stephanie is a better match for him.

Honestly, I don’t think he should be with either girl. If he can’t be honest with either of them, he shouldn’t be in a relationship.

Yeah, I find it kinda hard to root for him in this dilemma.

While I have read the Robin and Argent Double-Shot and some of Steph’s cameos in Teen Titans, they weren’t really favorites, as they didn’t really feature stuff that made her unique and loveable, really. The Cluemaster appearance, and a tiny reference to Steph by Tim, in Detective Comics, was really enjoyable.

As a big Tim and Steph shipper, I definitely think he should pick Steph, but I like Ari quite a bit.

While I have read the Robin and Argent Double-Shot and some of Steph’s cameos in Teen Titans, they weren’t really favorites, as they didn’t really feature stuff that made her unique and loveable, really.

Yeah, it doesn’t help that I’m not all that interested in what was happening in Teen Titans at the moment, anyway…

Reading these issues, I think we see a lot more of why he’s more interested in Stephanie. That said, if I’m perfectly honest, I don’t remember anything about Ariana, so it’s possible she was at least a good fit for Tim initially. Also, Ariana’s whole thing in these issues was…odd. Like, I can’t tell if Dixon really wanted to tell a story about consent and how having it taken away can warp someone’s idea about relationships, or if he was just trying to create drama and get a teenager in a slinky nightdress.

The Robin issues were decent – it was funny, the stuff with Ives made me initially think “Oh now, he’s gonna turn school shooter, isn’t he?” Seeing him in the Chuckee Cheese outfit was a funny relief.

Also, when are we getting a Baffler Black Label film, WB?

What? I thought everyone loved the De-Aged Atom era of Teen Titans! It’s right up there with Justice League Detroit!

Atom was de-aged? Man, that feels like an insult…to Justice League Detroit.

As with everything I hate about mid-to-late 90s comics, it all started with Zero Hour.

Ari is ok, but as an MJ fan, I am much more of a Steph fan than a Gwen with black hair fan.