[World of Bats] Batman: Creature of the Night

Hello everyone, and welcome to another installment of the World of Bats, the Batman Book Club!

This week we’re going to go a little more Elseworlds and explore a different take on the Batman mythos by covering the four-part mini-series Batman: Creature of the Night, written by Kurt Busiek and drawn by John Paul Leon. 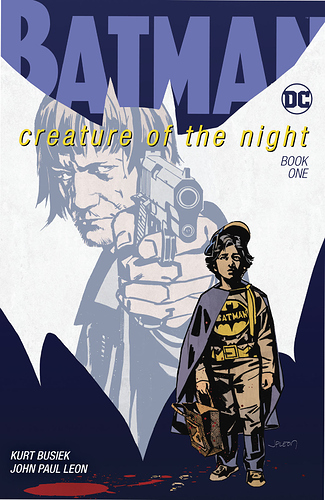 Young Bruce Wainwright lost his parents in a violent crime…and in the real world, no superheroes exist to save the day. But as grief and rage builds inside Bruce until he feels he can’t keep it inside anymore, something strange starts taking wing in the Gotham night! Perhaps Bruce’s grief isn’t inside him after all? Modern masters Kurt Busiek and John Paul Leon unite for the spiritual companion to the beloved SUPERMAN: SECRET IDENTITY, putting a new spin you’ve never seen before on the legend of Batman—and the dark emotions that drive him!

Here’s the link to the series.

So let us know what you think of this mini-series!

And if you’re looking for more Batman and Bat-Family Goodness that’s perhaps more in continuity, check out these posts by our wonderful family of groups!

First, we’re again collaborating with the Renegade Robins group, this time in preparation of the Robin War event by covering the first six issues of We Are Robin and the first eight issues of Batman & Robin Eternal! Plus, this month they are covering the first twelve issues of the Rebirth era of Red Hood & The Outlaws!

[We Are Robin] Welcome to the first part of the next big event from World of Bats: The Batman Book Club! and the Renegade Robins Club! In the wake of Batman Eternal and Batman: Endgame, DC launched two new series: We Are Robin and Batman & Robin Eternal. This event topic will be the last one to be hosted on DC Universe, and the follow-up topic (covering Robin War itself) will be appearing on the sequel site, DC Universe Infinite! Join the Bats and the Robins today! We look forward to though…

Over at Harley’s Crew, the group is discussing Harley Quinn Annual #1 & Suicide Squad #26-30!

What do ya do when your favorite plant lady has been locked up in Arkham? Why you break her out, of course! No matter who or what hallucinogenic lab concoction gets in your way!

[image] Harley Quinn Annual 1 Wanna talk about your favorite story, guest artist, or how you secretly love the idea of Ivy

Welcome back, once again, to the Suicide Squad! Time to find out what Harley’s really up to, and who is or isn’t going to make it out alive!

You can join or learn more about Harley’s Crew HERE. …

Through the month of January, the Dick Grayson Fan Club will be covering the Elseworlds series Nightwing: The New Order!

[91UzL5EyXPL] Happy New Year, @DickGraysonClub! To start off the NEW year, we will be reading Nightwing: The NEW Order #1-6! (I’m sorry I had to make the pun) NIGHTWING: THE NEW ORDER is the story of a future world without “weapons”—where superpowers have been eliminated and outlawed. The man responsible? None other than Dick Grayson, a.k.a. Nightwing, now leader of a government task force called the Crusaders who are charged with hunting the remaining Supers. But when events transpire which …

Over at the Justice League Book Club, the group is covering the first six issues of Geoff Johns and Jim Lee’s Justice League: Origin!

I hope you all had a splendid holiday season and are enjoying a swell 2021 so far. 2021 is the tenth anniversary of The New 52, so what better way to commemorate this milestone of the formation of a new era of DC Comics lore during the formative days of our new year than with the inauguaral issues of the book that launched The New 52: Justice League! Read on for the fun ways you can celebrate!

And finally, over at the newly christened Birds of Prey Club, they’re covering a smattering of older material from before the group is formed, namely the Batgirl Special, The Huntress #1-6 and Black Canary #1-4!

[EOA_7WBX0AA3oui.jpg orig] Our reading will be divided into three different “streams”: Origins, Spotlight, and Team-Up. We’re kicking off with Or…

If I missed one, please feel free to let me know and shout it out.

So when do we get a comic where a girl named Diana Princeton takes a vacation in Greece and discovers that she suddenly has the ability to lasso people?

I mean, if Kurt Busiek were writing it, I’d probably give it a shot.

So I just finished this (it’s funny, this is the first story in a while or maybe even ever where I just picked it for the club without reading it first), and I really liked this. I thought it was an interesting deconstruction of what makes our Batman tick. Bruce Wainwright was a great, well developed character full of pathos and good intentions, struggling with trying to make this fantasy that works in the comics work in real life, and all the horrible consequences that come with it. Also, the art by John Paul Leon was just spectacular.

I’ll admit that when they try to explain “Batman” by saying it’s Bruce’s twin brother who died in the womb that resurrected as Bruce’s protecter was…a decision. I’m not sure if I like it that much, and wonder if it would have worked better if they just never fully explained it. But that’s just me.

What did you guys think of the story?