Welcome to The Loft! 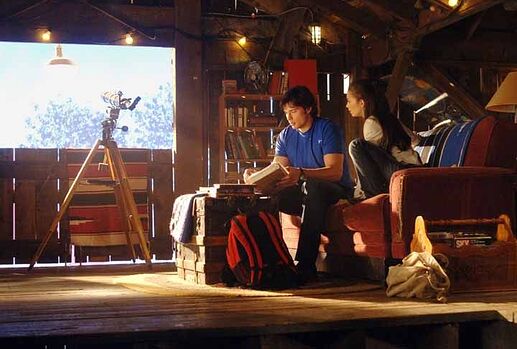 A place to come study or spy on your neighbor!

In this thread we will do our best to compile interesting facts and trivia about the show!

To get started, let’s just put Smallville into the context of the times!

20 years ago, before the Arrowverse and back when the CW was known as the WB Network, shows like Dawson’s Creek and Buffy were all the rage. The last time we had a live action Superman TV show was when Lois & Clark ended in 1997! Creators Alfred Gough and Miles Millar wanted to tell the story of Clark growing up but did not want another version of Superboy (1988-1992). Instead they conceptualized the show around Clark without the cape making Smallville fit with its contemporaries as more of a teen drama than a superhero show. This “no tights, no flight” rule keeps the show grounded (literally) and allows us to go on the journey with Clark as he becomes Superman not only in abilities and power but also in heart and experience.

Smallville ran for 10 Seasons, a total of 217 Episodes and 125 Season 11 comics! There are tons of references and Easter eggs sprinkled throughout the series and we will list some of the more interesting ones below. So pull up a seat, check out what we have discovered, and try to resist the urge to spy on Lana through that telescope.

Special shout-out to the Smallville Fandom Wiki for lots of these!

Do you have some interesting facts or trivia we missed?
Tell us in the comments below and we will update the list!

this is so cool!

The Loft is up and running. Woo-Hoo!

I forgot about that episode lol

Scrolled down here without looking to say thanks for the Spoiler Alert. Not only did it prominently feature my favorite DC character but it also kept me from reading on. I’m going into this show, and the watch-alongs, with a clean slate on October 16th so I will not be hanging out in The Loft with y’all. Have fun, don’t talk about me too much and see y’all on the 16th!

I loved the Amy Adams episode!

I’m glad my alert worked! I made that GIF and I’m very proud of my creation!

you will have to check back in on the season 1 section once we’ve watched it!

I think you are going to have a blast discovering this show!

One of my favorite and biggest “oh my gosh” moments when first watching the series was when he meets Dr. Swan and I instantly recognized Christopher Reeve.

In some of my research if found some lovely stories about Mr. Reeve. The crew were so concerned with not wasting his time that they made the set very simple at first, like just an empty room with a screen. Reeve had watched the show and was dissatisfied with the set and knew what the rest of the show looked like and told them he wanted it to be good and they could have him as long as they needed. So they reset and made the Swann office. He also took Welling aside and asked if they would put him in the suit which Welling said he didn’t know but it seemed unlikely. Reeve said he hoped that wasn’t the case and that Welling would be a great Superman!

He also praised the show and Welling for evoking the feel from the Smallville scenes in Superman: The Movie and actor Jeff East’s version of young Clark.

I love this! I was super sad when Christopher reeve passed and they did that tribute to him at the end of an episode.

I was heartbroken when it say that. I started watching Smallville for the first time about a month before camp and seeing that tribute brought back all the emotions from his death.

I’m glad they did the tribute and continued advocating for the Christopher Reeve Foundation in later episodes too.

I was watching Spider-man 2 (2004) today, did you know there’s a Smallville connection to this great film?

Alfred Gough and Miles Miller who created Smallville both wrote the story with Michael Chabon for Spider-man 2.
You can sort of see a bit of Smallville’s touch in the movie, Clark as Peter Parker, Lana Lang as Mary Jane Watson and Lex Luthor as Harry Osborn. Oh and Lional Luthor as Norman Osborn.
Like Peter, Clark has lost his powers, Lana doesn’t want to talk to him. Lex with drinking problems.
The movie came out at the end of season 3.