Robin on the Rocks

Brr! It’s a chilly week for Batman and the Boy Wonder! The Renegade Robins Club invites you to join Jay in facing off against some classic Bat-rogues! We have Scarecrow, Penguin, and Mr. Freeze giving trouble to Dynamic Duo Part Deux!

Click this drop-down menu to go clubbing with Jay:

Jay is dropping in all over the place in 1984! I guess the other writers finally decided to play along:

Here’s a guide to this week’s reading:

In the words of Superman, "It tickles!" 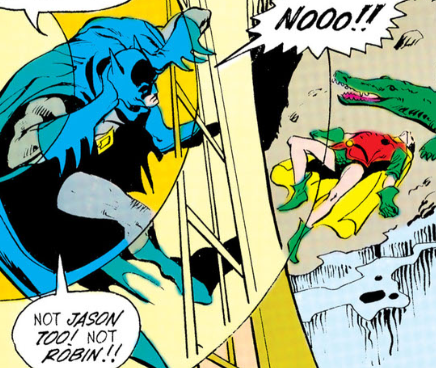 Giant Batcave penny for your thoughts! 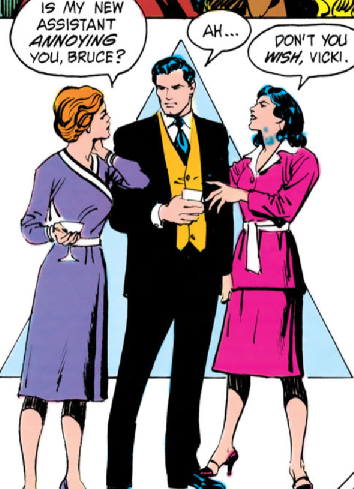 And most importantly, who should Bruce choose as his significant other?

Wow, that image of Robin frozen in ice really brought back memories. I owned random comics as a kid, but what really lead me to being a comic collector were two issues that my dad got as a “gag gift” that I ended up with… a Superman issue and this one. Told in poetry from the view of a henchman if I remember right. I still have it, too.

Told in poetry from the view of a henchman if I remember right.

Yeah, my fourth discussion question is about the poem (and you may be able to detect how I feel about it from the snide way I phrased the question

I already have an answer! But I’m gonna wait and answer ’ em all at once after I read everything.

For me, at least, the best story in this set of issues is the one with Scarecrow. (This won’t be the last time in Jason’s career as Robin that he faces the Scarecrow, either.) I like the callback to the death of Jay’s parents at the Gotham Zoo, and Moench will revisit that location again in an upcoming Calendar Man story.

In the middle of reading the issues right now, but one thing I liked about the Scarecrow story was foregoing the gas and instead using the skull and the frequencies that mess with the fear receptor in the brain. It’s Comic Book Science at it’s wackiest, but it shows Crane’s twisted genius that he can create fear in more ways than just huffing the gas.

I loved the Scarecrow story too and because of the way it shows how twisted and yet how smart Crane is. I’m still reading the last group of issues but the Crane story will be my favorite of the lot I think.

I liked Scarecrow’s scheme the best. It really showed off his intelligence and using something other than the usual gas to produce fear in his victims was fun to see.

There was a touch of '66 Penguin in Oswald’s attitude here and in his scheme as well. I particularly liked the part where he told Batman flat out that he was no traitor to his country. I found that particular point interesting.

Mr. Freeze had a nice scheme going and I loved the ice cannon. This story made me wonder if that scene in RHATO #9 where Chinatown is covered in ice by Freeze was a callback to this story.

Oddly enough it seems very similar to when he actually loses Jason Post-Crisis. In both cases he is very attached to Jason, cannot seem to let him go, is horribly distracted once he loses Jason and is willing to do whatever it takes for Jason. I find the parallels here fascinating.

Harvey’s subplot was my favorite and I loved that it was Jason that ended up coming to his aid there. (something that again was referenced in RHATO later.) I’m getting a bit annoyed now with the whole Vicki and Julia love triangle deal though. Alfred I feel sorry for. He didn’t handle the situation with the CWB with his usual aplomb.

I enjoyed the motif but it could have been written better.

Nightshade’s scheme was great but he was a bit of idiot especially in thinking he was better than the Thief of the Night simply because he “defeated” Batman. He left me shaking my head.

I liked the Printer’s Devil better to be honest and I’m not the biggest GA fan. I have been enjoying the backups in 'Tec quite a lot though. They’ve been fun.

Classic schemes by classic villains. Batman really does have the bestest villians.

It’s exactly what I would suspect except I kind of think he wouldn’t be above greasing a few palms to get him back. Money makes the world go round and he’s got enough of it.

I think Bullock gets more enjoyable as the story prove and less of a bumbling idiot. Julia and Vicki, honestly I could really care less but that !at be partly because I know neither romance is really going anywhere.

I did enjoy it. I think we have to remember that this is a thug writing this poetry. Despite what the other thugs have to say about it, he still never made it as an artist or a poet. you have to expect a certain lack of talent. And you’ll notice they’re a lot more complementary on his art rather than his poetry!

Printer’s Devil? Was that the Green Arrow guy? I’m not gonna read those anymore, just not cutting it for me. Nightshade was okay, though, as a baddie you know you’ll never see again.

I think I agree with most of the group by saying the Scarecrow part was probably the strongest. I did find it interesting to see Mr. Freeze before he really became the character we know via Heart of Ice.

It’s definitely a unique story that I don’t think we had really seen on this level before, exploring the idea that nowadays, a kid in Robin’s position might be looked at strangely and possibly taken away for going out at odd moments at night to fight crime. I’m a little surprised they didn’t go for stuff like bruises from the fighting and implying that CPS might think Bruce was hitting Jason.

It was also interesting, maybe a smidge surprising to see that Bruce specifically said he would do everything within the confines of the law to get Jason back. Considering his second job as a vigilante, one might think he would be break some rules in order to save his family.

Harvey definitely has the more interesting subplot of the assassination attempts. However, while the whole “who’s dating Bruce” is a little annoying, I do kind of enjoy the dynamic that Julia and Vicki have when they’re actually working together to crack a story. They’re rivals for another man’s affection, but they seem to genuinely respect each other and work very well together. It’s kinda neat.

I can’t critique poetry because I know I can’t write it for the life of me, plus I honestly don’t remember much of it.

Nightshade and Nightmares Inc was an interesting idea – their actual gig actually sounds like something that could be profitable and good for them, if not taken so far. They’re like a mobile haunted house troup, that sounds like a fun party to me.

And honestly, I’ve kind of lost interest in the Green Arrow stories at this point. Maybe it’s because I was a little behind, but I found myself skipping over those fast this week.