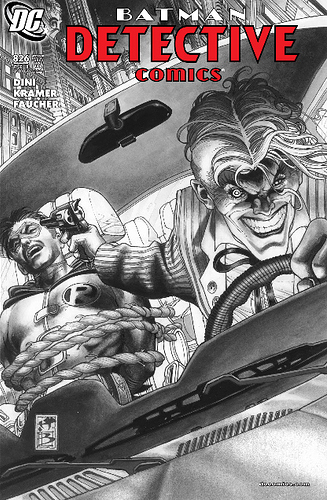 image417×636 233 KB
Welcome to One-Shots, a weekly book club where we read and discuss a single issue with little to no context needed!

Did the Joker’s actions in this issue surprise you? Did Robin’s?

Nothing the Joker does could possibly surprise me! As for Robin, that left hook was fairly surprising.

What did you think of the dynamic shown between Robin and the Joker in this issue?

More of a monologue from the Joker in this issue some he had Tom gagged most of this. I was reminded here how much more I likIm Tim as Robin over Damian. I had a particular affinity for Tim.

Put in a situation similar to Robin’s, what do you think you would do? Would you be able to keep your cool, or crack under pressure?

I had never heard of Don Kramer before, but he was really good on pencils. I had just read Paul Dini’s autobiography, so I look at Joker and him in a new light than I had before a week ago. Overall, the Joker acted like himself for the time period. He was still goofy yet maniacally evil in the mid 2000s. In the end, I give it an 8/10. Decent, but not incredibly memorable.

I really how the joker acted in this, he found robin on the side of the road picked him up and set up an appropriate death trap that would mess with his (making him watch as he ran over a bunch of civilians, leaving the car under the seat) I also loved how robin used the quote to respond to jokers question when he was going to run over the santa with the kids.

The dynamic was really fun, Tim definetly showed off his great deductive skills which he is known for which paired well with joker’s planting of the toy car and his unpredictable nature.

I would not have thought to even look for the toy car under the seat so I guess I’m already doing way worse than Tim. I feel like I would have been the one who would have ended up in front of the truck though if I did get away from the Joker

I give the story a 8/10 definetly a good read for the holidays and a good look at the characters of Tim Drake and the Joker.