DC History Club: Crisis on Infinite Earths, The History of the Greatest Event in Comic's History 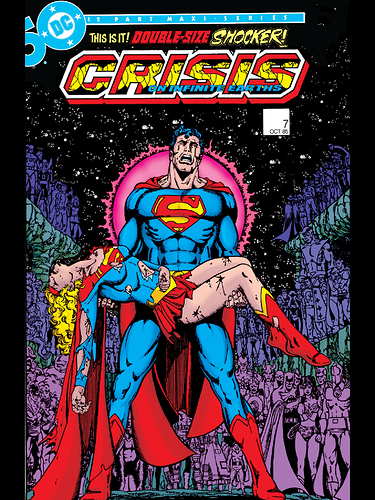 image1536×2048 2.67 MB
Welcome to another edition of the DC History Club where each month we explore the story behind the stories from 80 years of the greatest superheroes in print and on the screen. This month we will join the Crisis of Infinite Clubs crossover as we research and discuss the 1985-86 series Crisis on Infinite Earths . We will be focusing on why DC decided worlds must die, how its creators implemented this multiverse shattering event, and the impact COIE had on DC and comic books in general.

Suggested Reading: Crisis on Infinite Earths , if you haven’t read it before there’s no better time.

Additional Reading: For an even deeper dive, you may want check out some of the COIE tie-ins many available here on DCU.

Research Reading: In the post immediately below you will find a wiki with links to articles, analysis and interviews concerning COIE. If you find additional resources in your research, you can add them to the wiki by clicking on the orange pencil icon in the upper right corner.

An Additional Research Resource: We are in the unusual position of having an original research tool at our finger tips here on DCU. The DCU Book Club began reading on discussing COIE in mid-November. In their discussion, you will be able to find the reaction and thoughts of those reading the series for the first or tenth time. Many of the clubs dedicated to DC’s greatest characters have focused on COIE related issues, providing more insight.

Discussion Topics: The best discussion topics are those you bring to the table based upon your research and reading of Crisis on Infinite Earths . To help get the discussion started the below are suggested topic questions.

Keep a look out at mid-month for the Crisis edition of “Vote and Defend.” We’ve already got one poll question for a club member’s suggestion, still open to more.

If you have research resources to add, click on the orange pencil to the right and edit this wiki post

CRISIS ON INFINITE EARTH’S CREATORS REFLECT ON THE INTERNAL BATTLES AND MAJOR MOMENTS IN THE LANDMARK DC EVENT
A lengthy article the presents the perspectives of the creators and executives responsible for COIE
https://www.syfy.com/syfywire/crisis-on-infinite-earths-creators-reflect-on-the-internal-battles-and-major-moments-in-the Marv Wolfman On Crisis On Infinite Earths | C2E2 2019 | SYFY WIRE

Monitoring the Past: DC Comics’ Crisis on Infinite Earths and the Narrativization of Comic Book History

Crisis showed the two major superhero comic book publishers (DC Comics and Marvel Comics) how they could utilize the continuity established by decades-worth of stories to weave together a cohesive, metatextual tapestry that both appealed to long-time readers and brought in massive amounts of money.
https://web.archive.org/web/20180315212451/http://www.english.ufl.edu/imagetext/archives/v6_2/friedenthal/ 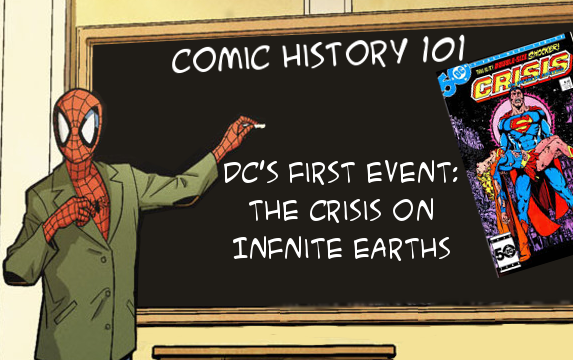 Comics 101: The Crisis on Infinite Earths — You Don't Read Comics

For their 50th birthday, DC chose to celebrate by burning down the house.

If you see any character missing, click on the pencil to the left and add them to this wiki post. This month’s Vote and Defend will use these lists.
Characters Killed During COIE
Supergirl
The Flash

Fate of Wonder Woman Earth 1??
Crisis 101 link says she was killed
In issue 12 a Wonder Woman reverts back to clay
Earth 2 version goes to Olympus

I don’t know if the Multiverse had to be destroyed. But Wolfman did a truly masterful job of creating a cohesive “DC Universe.” Over the next couple decades, some cracks were found (the Hawkman mythos); but overall, he did a stellar job.

Once the foundation was in place, there were lots of gaps that the rest of the DC creators needed to fill. John Byrne’s run on Superman wouldn’t have been possible without Crisis. Jones’s redefinition of Hal Jordan and the half dozen Green Lantern spin offs never would’ve happened (which means, we probably would never have gotten to Blackest Night and Johns’ pivotal run). David’s Atlantis Chronicles wouldn’t have redefined the entire Atlantean mythology. The Charlton heroes wouldn’t have been introduced (which led to Giffen’s stellar run on Justice League). And on and on…

Everyone harkens back to the heyday of the early '90s (and it was a truly fantastic time to be reading DC), but none of that would’ve happened without Crisis. The '90s were so fascinating because of the foundation built in Crisis. Having a cohesive “sandbox” universe gave guidance to the entire DC staff.

In today’s DC universe, characters’ personalities change according to the creators’ whims. And while this “artistic freedom” sounds great, it’s my opinion that it cheapens the universe overall. For example, depending on the author, Batman’s either a world-class detective (incredibly smart, but fallible) or he’s the smartest man on the planet (completely infallible and usually predicting ther crimes). This type of inconsistency confuses readers and pushes them away. Character inconsistency was a major target of Crisis.

@harley.333 have to think more about the idea that COIE was necessary for those character defining runs. But really honed in on your word “cohesive” to describe the DC universe post COIE. That’s the key to both New52 and Rebirth also. Not that continuity is precisely defined, but that the universe holds together in the reader’s mind in a way that makes sense.

1986 Comic Book “Whatever Happened to the Man of Tomorrow?” Written by Alan Moore Editor Julius Schwartz, the story was published in two parts, beginning in Superman 423 and ending in Action Comics 583, both published in September 1986. The story was drawn by long-time artist Curt Swan in his final major contribution to the Superman . The Last Stand of Krypto Lana Lang Insect Queen and Jimmy Olson Elastic Lad attacking the villains to save Superman. The last imaginary story.

1986 Comic Book The Legend of Wonder Woman Perez needed time so these four issues that year were required because otherwise character would have reverted to Marston. Estate. A look back at deceased Wonder Woman. Kurt Busiek and Trina Robbins’

1987 Comic Book Wonder Woman Perez.
This Diana is new to Man’s world. Not an experiencef super hero at all.

1987 Comic Book Flash 1 Wally West as Flash but less powerful than Barry Allan For example, instead of being able to reach the speed of light, he could run just faster than that of sound.[The character had to eat vast quantities of food to maintain his metabolism.

1987 Comic Book Shazam!: The New Beginning. Roy and Dani Thomas artist Tom Mandrake. The personality of young Billy Batson is retained when he transforms into the Captain. This change was justification for his sunny. Golden-Age personality in the darker modern-day comic book world

@TurokSonOfStone1950 @harley.333 yep, was just looking at the post Crisis rollouts, 100% right about Superman, Green Lantern, Aquaman and can add Wonder Woman to the list

It is also important to know what was happening the few years prior to Crisis.

The main event was Warners Brothers wanting to liscense all DC Comics to Marvel because DC wasn’t selling well.
That was the crisis that may have caused Crisis.

1984 Comic Books DC Comics were not selling while Marvel was doing great. Warner Brothers wanted to license the characters to Marvel. According to Jim Shooter. Marvel would have continued to publish DC’s seven most popular properties – Superman, Batman, Wonder Woman, Green Lantern, Justice League, Teen Titans and Legion of Super-Heroes

1985 Comic Book Superman Annual 11. For the Man Who Has Everything. Alan Moore and artist Dave Gibbons

As an extreme example of the cohesiveness, you can look at the Invasion! crossover event (which redefined the DC alien races). Giffen set in motion a storyline which wouldn’t be resolved for five more years and culminated in the destruction of the Earth in LoSH. That level of universe-wide story telling is simply unheard of in today’s DC Universe.

In today’s universe, you’ll have a line wide crossover like Metal which focuses on a single character. And while Metal implied universe-reseting ramifications, it was largely forgotten about two months later.

In After Crisis history

Made clearer than in 1986 a four issue mini on deceased Earth One Wonder Woman was published because Perez Title not ready and character would have reverted to Marston Estate.

Why was Crisis needed?

DC had character that had bern published for 50 years. The Earth 2 characters were allowed to age. But that meant that characters who wre in their 20s in the 1940s were at least in rheir 60s in 1985.

Some characters like Dr Fate and Spectre were probably immortal and could be moved easily to Earth One.

The age of the other heroes mrant Earth Two.was no longer a good story world if set in the present. Therefore it had to go.

The other Earths made crossover with Charlton Fawcette and Quality characters difficult.

Byrne wanted to junk all the Mort Weisenger excess and allow the character to be the Sole Survivor of Krypton. So Supergirl had to die.

Since Wonder Woman was new to Man’s World. Donna Troy Wonder Girl existed as a super hero beforr her. Donna never recovered from this.

Even Earth One heroes were aging. Hal Jordon had some gray hairs. Barry was the same age. So Flash again was to start a new era with Wally West not as powerful.
Another reason to kill Barry was he started the Silver Age and his death would end the Bronze Age. Also he was the first real legacy character replacing the original Flash Jay Garrick. So it would be appropriate for him to be replaced at some point anyway.

And while Metal implied universe-reseting ramifications, it was largely forgotten about two months later.

I don’t know about this. Metal led to No Justice which led to Year of the Villian. And we still have the Batman who Laughs and Tales of the Dark Multiverse. It seems like Metal is still having ramifications today.

I don’t think you could make a fair judgment on Metal’s impact yet. It’s not COIE with immediate universe setting implications, but as you say it’s tendrils are still out there. How iconic does the Batman Who LAughs become (FYI hate the character)

He’s okay in small doses, a lot like the Anti-Monitor is in my opinion.

There’s really not anything that could compare to how Crisis completely reset the line until the New 52. The changes from Crisis seemed little more gradual than the way New 52 was handled.

I think I read somewhere that Wolfman had originally proposed a complete relaunch of the line following Crisis but was turned down. If that’s the case, I wonder if the New 52 was actually inspired by Crisis in some ways.

Here’s a bit of COIE trivia I found in the article @TurokSonOfStone1950 posted in the research wiki above. The Flash doesn’t really die, he ends up in the 616 universe. 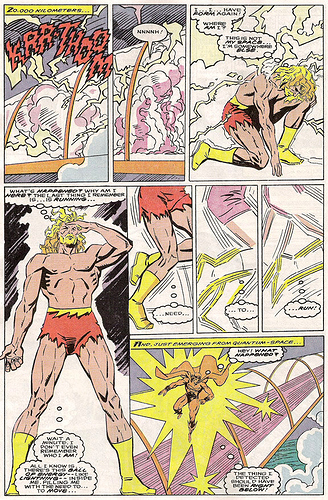 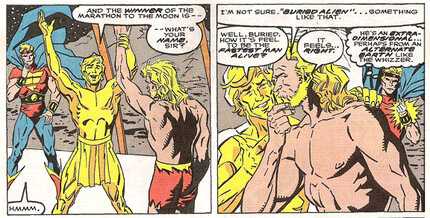 One idea from Crisis that was good in concept, poor in execution imo was making Superman the genuine Last Son of Krypton. As much as I like that idea, the hoops they had to jump through to facilitate that were just ridiculous (don’t get me started on Matrix or that Power Girl being Atlantean crap).

Are there any other post Crisis concepts that you guys believe could have been executed better?

@joshtheblueguy you gain the last son of Krypton you lose Supergirl, tough trade off. You poss a good question. I’m going to edit the intro here and add that with credit to you

@joshtheblueguy for what could have been better thought out in COIE and handled afterward, I’ll go with the easy answer of Hawkman. The original JSA Hawkman has a unique history that sets him and Hawkgirl apart from most other DCU heroes. Reincarnated Egyptian royal lovers fated to reborn again and again only to find each other again. That’s the kind of hook the interests people like my wife who isn’t even into comics. It would have been very easy to reconcile that origin with Katar Hol and Thanagar, just like they finally have.

I think we’ve discussed this in an older thread before, so it goes without saying that I definitely agree with you!