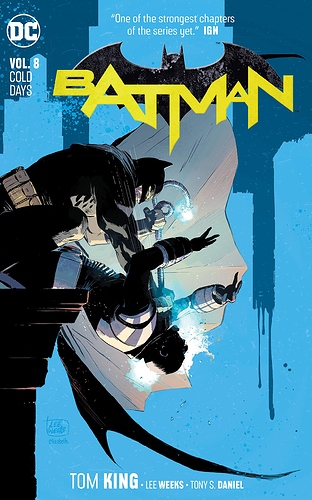 This weeks flair is

which is a Batman vs. Freeze image from the comic!
Primer TBD

Nice! Been meaning to do the books for this club, but had to slack on The Flash because I’m WAY behind on that book and haven’t been able to catch up. I’ve been wanting to reread these, so I’m looking forward to it.

Also, just so you know, the date you set up on the post is for tomorrow, I think you mean the 27th, right?

Also, I create a Primer to help you jump ahead. Flash (2016) Is fairly good at being accessible with each volume. The Primer is a this is what you missed/ might help you. I try to do them, but I don’t always have time. (If you beg for a primer though, I’m more likely to do it).

The Twelve Angry Men arc is really entertaining. I’m not sold on the direction this collection takes Dick Grayson, but the story itself with KGBeast is pretty good.

That’s generally where I stand on this volume. I actually like all of the stories. It’s the treatment o dick Grayson in Nightwing that frustrated me

And it should be noted that what happened in Nightwing wasn’t at all what King had in mind when he did that. According to an interview he did for the podcast Gotham By Geeks, his and Nightwing writer Benjaman Percy’s original idea was that when Nightwing is shot in the head, he wouldn’t die, but would be that he would have lost all sense of vertigo, making him at least for a while completely unable to do his thing as Nightwing. During this time, Tim Drake would take on the mantle of Nightwing while taking care of Dick.

While he doesn’t exactly say this, it can be inferred that since Bendis wanted to use Tim for his Young Justice book, those plans were changed, Percy didn’t like that and left the book, and editorial had to figure out some other way to keep Dick to the side for a while to keep Bruce in his downward spiral. And thus, Ric was born.

Not intentionally, I’m sure, and I think considering the book he had, it’s pretty valid to want the original trinity of that book of Conner, Bart and Tim for it. Also, while I haven’t read a lot of what they did with that status quo in Nightwing, I feel like there was potential there to do something interesting with the character, it just doesn’t seem to have been executed very well – again, from what I’ve seen.

Dan Jurgens found a really interesting way to explain what happened (through retconning with the Court of Owls). For the most part, I think it worked.

That’s interesting, I love hearing behind the scenes stuff like that.

You called this set of DC stories the “groundwork,” but I would probably take a more cynical approach and call it the “derailing.” It’s the beginning of the end for everything DC was accomplishing in Rebirth and the resurfacing of New 52 sentiments.

That doesn’t mean that I can’t enjoy individual stories, of course.

@AlexanderKnox I get it. It’s called Groundwork because it lays out the beginning of Phase 2. We can argue that Phase 2 is where everything began to fall apart, but it is technically groundwork for what is to come.

I’m okay with what happened to Nightwing here, it was certain a great story beat, and I was definitely shocked when I first read this. I can’t judge this story on what then happens in his own title.

I really liked Bruce on the jury, that was great wrighting, and the KGBeast is one of my favorites for some reason so it was fun seeing him again. The dialogue in those issues was good stuff.

@ralphsix Unfortunately I got it spoiled for me (because I was waiting to buy the trade), but I thought it’s a powerful moment that forces Bruces to handle a lot of change very quickly.