I think I have to go with The Long Halloween. Strange Apparitions and Venom are also very good stories. And I suppose I’m personally partial to Knightfall even though I acknowledge that parts of it aren’t very good at all.

“To Kill a Legend”

THE STORY: The Phantom
Stranger sends Batman and
Robin to a parallel world where
a young version of Bruce Wayne
hasn’t lost his parents yet. Robin
isn’t sure if they should
interfere. After all, doesn’t
this world need a Batman? But
Bruce Wayne isn’t about to sit
back and let his parents die
again…or is he?“To Kill A
Legend” celebrated Detective
Comics 500th issue with a story
that questioned what it means
to be a hero. Writer Alan
Brennert’s single-issue story is a
favorite of many Batfans, who
still ponder its implications to
this very day.

FOR FANS OF: If you enjoy tales
of alternate realities and/or
philosophical questions then
this story is for you. If this comic
feels like an episode of The
Twili Zone, don’t be too
surprised…Alan Brennert was a
frequent writer for the show in
its 1980s incarnation.

WHERE TO FIND IT Detective
Comics #500

I’m with McEddard. Morrison’s run is probably my favorite. That said, I adore dozens of other stories/runs that are very different from that one.

These are the favorite stories of Mike Uslan.Executive Producer of all Batman.videos since 1989.

I made Tim Burton read it when we were pitching him to direct the 1989 Batman, and you’ll see its influence in the opening sequence of the film. I bow before my comic book course guest lecturer Steve Engelhart, and Neal Adams and Sal Amendola, and Archie Goodwin, for this historic work- in which, by the way, there is NO dialogue. Batman says nothing. He doesn’t have to. The emotional impact is intense.

A lot of comics come to mind, but the one that I think tops the list is Neil Gaiman’s “Whatever Happened to the Caped Crusader”. It’s definitely not a standard Batman story, but it does a great job of encapsulating the essence of the Dark Knight.

Of course the classics/essentials are definitely among my favorites (Dark Knight Returns, Year One, Court of Owls, and so many more), and if I gave it more thought I could probably find a dozen more Batman comics that are personal favorites, but Gaiman’s two-parter is a fantastic tribute to the character, and something I would highly recommend to anyone who has been a long-time Batman fan.

Here are a few more of my favorites that haven’t been mentioned yet:

Man. That may be the toughest one yet. I’m gonna stick with my go to Black Mirror. I honestly love every choice on here & way more. I just love the tone of Black Mirror. When you get to the ending & it gets even better is the mark of a great read for me.

@TurokSonOfStone1950 Love this post! So many suggestions I plan on checking out as many as possible! Thank you!

I read this comic after seeing your recommendation, @TurokSonOfStone1950. Thank you for the brief synopsis and reference of where to find! As you mentioned, the issue contains a few other stories but I focused mainly on “To Kill a Legend”, which was a nice 21-pager. The art and coloration were a classic Batman style that I found peaceful and warm, with a very interesting plot line of what if. Great suggestion for Batman fans to check out! Thank you again!

This a no-brainer for me: Batman: Year One by Miller and Mazzucchelli

So for me I have a special love for any Batman story by Jeph Loeb and Tim Sale, namely The Long Halloween. The first time I read it I loved it so much that I knew even at the beginning I needed to savor every panel and line of dialogue (you can only read something for the first time one time). I’m also very partial to their short series Haunted Knight: Ghosts, Madness, and Fear

Special shout outs to Batman: Noel by Lee Bermejo and Batman: Earth One Volume 1 and 2 by Geoff Johns. Really enjoyed those and hoping Johns will have time to get Volume 3 done soon. I also can’t help but mention Batman: Year One which was the first series of Batman comics I ever read. It opened up this whole world of comics to me and for that it will always have a special place in my heart.

I’ve only been reading comics for about a year now, so I really want to add more to this list. Looking forward to checking out suggestions above.

Death of the Family is what got me collecting comics again. That Joker was one of the most twisted Villains I have ever come across and after it being so long since I had collected the side of the collector’s box gave me chills: 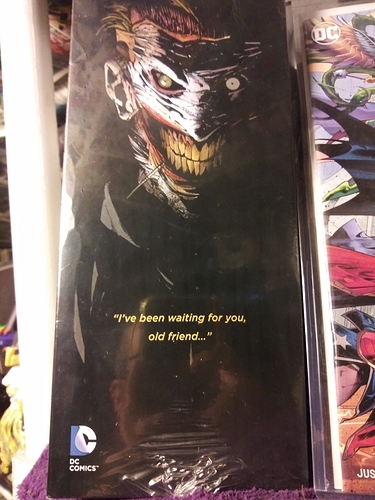 There are so many to choose from its so difficult to pick just one!! So I’ll choose two