@TheBatmanofNML I am actually reading through that right now. Bought Cataclysm, Road to No Man’s Land Vol 1 and 2 and all 4 volumes of No Man’s Land. Currently about halfway through No Man’s Land Volume 1. Just read the series Fear of Faith. Really liked how Scarecrow sewed fear to bring bedlam. Good stuff. You have any series within it that stands out to you as your favorite?

Snyder’s “death of the family”. About as perfect a Batman and Joker story you can get.

Did anyone say “Arkham Asylum: A Serious House on Serious Earth” on here?

In my eyes, Dark Prince Charming is one of those out-of-canon stories that became an instant classic. Marino’s artwork is top-notch, and the plot itself is fascinating to me.

I completely agree. I had no choice but to purchase the hard cover version. There is this amazing two page spread of Batman overlooking Gotham City that I desperately want framed on my wall without the speech bubbles. 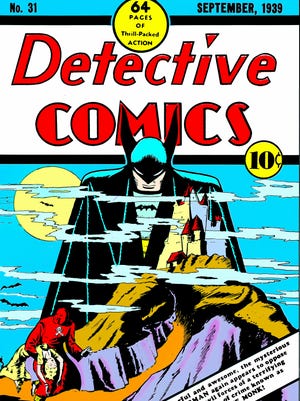 Detective Comics #31 (and #32) was the first classic Batman story that I read when I was just beginning to dig into the Caped Crusader’s titles back in 1989 and it remains my favorite to this day. Bob Kane’s shadowy imagery of Batman during his first year in Gotham, Bill Finger’s utterly compelling storytelling, the first appearances of the Batarang and Bat-Gyro (forerunner of the Batplane) -just a fantastic story in every way. Batman in his purest essence as the Dark Knight. Love this book.

Fear of Faith was also one of my favorites. My top spot (also in Vol. 1) goes to Shades of Grey. It has some flash-backs I see as interruptions but when I read it the first time I suddenly got NML. Gotham is broken. Batman isn’t trying to fix it, he’s trying to keep everyone alive. It’s join with somebody else and probably die or die alone.

Bill Finger was a great writer but often missed deadlines

Already mentioned, I have a great appreciation for Morrison’s run largely because when I got back into comics was right around the beginning of his epic Batman tale.

@DC89, that is a awesome comic issue, I wish I owned the comic, it’s pretty rare too.

I really loved Batman Under the Red Hood. It might be cheesy but I love it. I am in the process of reading a Long Halloween for the first time and I love his artwork

I’ll have to let you know once I reach Shades of Grey! Sometimes the compilation is a little bogged down with characters I am not as invested in - sometimes I’m like “give me more Batman”

so I’ve skipped an issue or two before. Azrael is one of those - maybe I just need to read Knightfall in order to understand him better.

Knightfall might not be the best place to gain an appreciation for Azrael since he’s placed in an antagonist role for most of it and is explicitly not himself. He serves that role well, but I think I found him more compelling in his own solo series (which does follow up on Knightfall’s events pretty heavily).

Though I personally was introduced to him in Tynion’s Detective Comics run from 2016, then read the NML tie-ins, then followed him back to the solo series, then finally read Knightfall. So if the tie-ins aren’t grabbing you, the series might just not be for you in general.

This is a really tough question. But I’m gonna go with BATMAN: EGO, by Darwyn Cooke. A deep look into Batman’s psyche with art that’ll break your heart.

Favorite is The Black Mirror by Scott Snyder because it takes a different look at gotham throught the eyes of Dick and I like it’s horror influences.

Or if cant accese link

Go to
Comic Bools
Browse
Get to Know
Sort alphabetically
Find Batman
There is a
Start reading article
At the top.

Just finished To Kill A Legend - agree with you, it does have some very warm moments. I appreciated the epilogue a lot. Nice little one off story.

Aww, awesome @Gothamite.ZJN! I love that! So thoughtful of you to reply that you read it too, thank you!

That’s my favorite Joker comic or I would’ve used it here too. It’s dual purpose tho. So I usually go Black Mirror for Batman & DOTF for Joker. It’s SO GOOD tho, I agree.

I might’ve? if I ever get to read it? It’s on a list of ones I’ve been dying to read. Might have to go the library route. I would support comic book stores but I don’t have the cash.