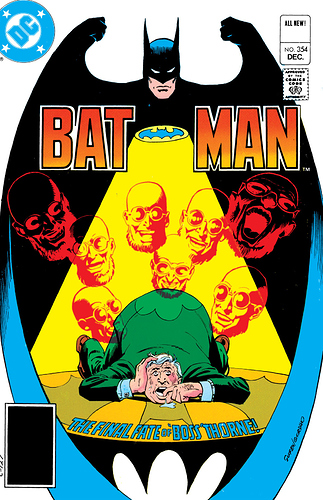 Howdy y’all and Happy Memorial Day! Be sure to thank your fellow patriots who have served our great country and remember those who sacrificed everything so that we could have our freedom. This week in the World of Bats where this post is defiantly not a day late, we are going to revisit some more oldies but goodies featuring our caped crusader. Batman picks a fight with a couple of balloon enthusiast and wrecks his batmobile. We’ll also check back in with Boss Man Thorne and see how he’s getting along with a Strange ghost while Selina works on here Jealousy.

Let us know your thoughts down below! And if you haven’t joined the World of Bats club already, you can do so by clicking HERE ! And if you have any questions, feel free to contact @Jay_Kay, @BatJamags, and @AquamonC137.

The Late Night Watch Along group has just started the Human Target TV series, so it was quite pleasant to see Christopher Chance show up here!

Oh I didn’t even think about that but yeah, The Killer Sky! I’ve never watched Human Target, will have to give it a look.

And the first story here is an example of Gerry Conway’s creative decision to modernize some of Batman’s earliest adventures. It’s based on the Dirigible of Doom story from Detective Comics #33 (available along with the Batman story from 'Tec #32 right here).

Nice bit of trivia! Robin is just chilling beside it in his shirt and green underwear, crossing his legs as if he’s really needing to run off to the Bat-Lavatory for a second. 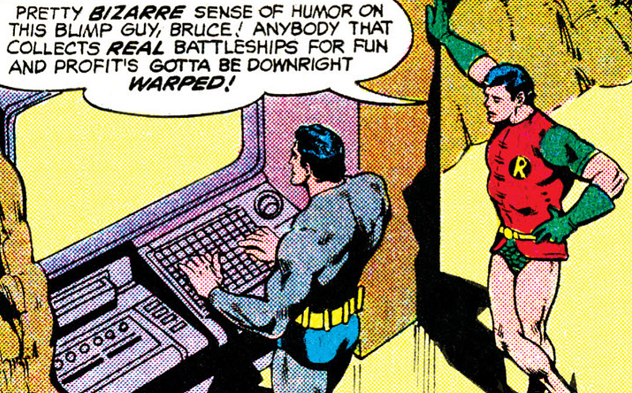 Also, Bruce calls him “chum” at the end of the scene, so we’re firmly in MY BATMAN territory.

He obviously felt quite modest about it and overdressed later that day: 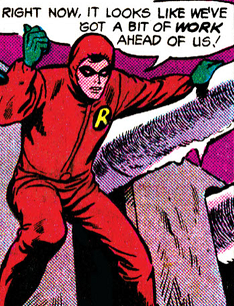 No, no, Dick! You can’t wear a red hood! That’s your replacement’s gimmick! 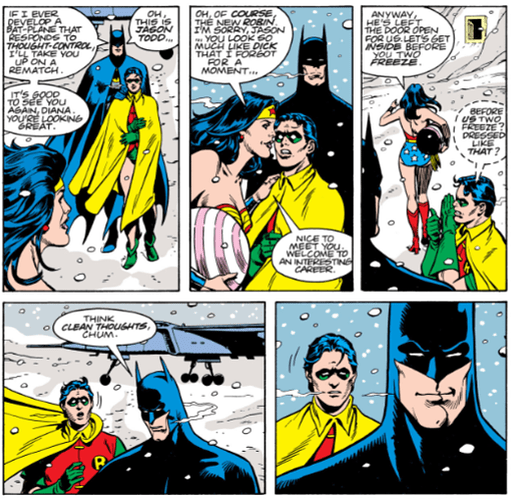 Jason DID get a more winter-friendly version of the suit in a story from Batman Annual #13 by Christopher Priest. I’d post a picture, but this site still hasn’t uploaded that issue…

Another bit of trivia: the Batgirl backup story in 'Tec #519 is written by Barbara Randall, who would go on to write two significant post-Crisis Babs stories in Secret Origins #20 and the Batgirl Special (a prelude to The Killing Joke).

Well I guess his look has taken many Faces 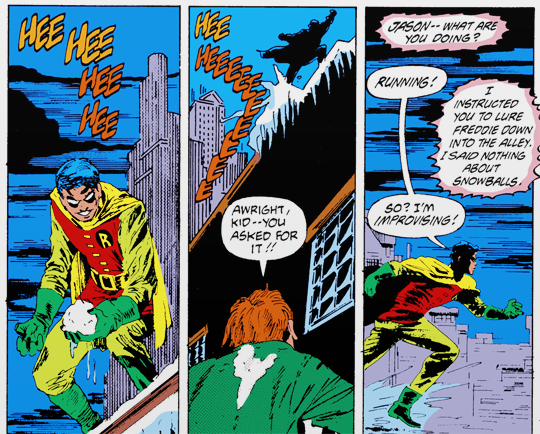 I thought I’d venture momentarily from the safe confines of the World of Wonder, Doom Patrol and Superman and enjoy the thrills of the Dark Knight Detective. Would I encounter a member of his unparalleled rouges gallery? Would Batman be conflicted and drive away those closest to him? Would he say “I’m Batman”?
Well, it was two issues of Colonel Blimp working out daddy issues by stealing a battleship and a sub with his lighter than air ship. And, he demands “Ten millions dollars!” Surprised he didn’t have a cat to pet.
Okay, but this Batman is still pretty cool. He and Robin carry an otherwise silly story. Good visit Bat Heads.

Hey msgtv, glad you stopped by

Yeah the killer sky story isn’t usually consider one of Conway’s best but the art is great, really like the colors in it. That Colonel Blimp was pretty cliche for sure

I always thought the fact that their hideout was a old blimp production factory to be a bit to on the nose, and should have been rather easy for the military to have connected the dots. As Knox mentioned above, it is a call back to a pretty historical issue from early on in batmans career. #33 first time a hero/superhero used a gun. Earlier this month we dove into Engleharts Strange Apparitions and in DC #520 this week we return to see what becomes of Boss Thorne. I debated on whether to start with #520 (Dr. Strange&Thorne) and finish with the Squid story in B 357 & DC 524 but B 356 where we end this month concludes it’s story and the squid story ends with a tease for Killer Croc. I wanted to wrap up the Dr. Strange and Thorne but including the squid and croc story would have been a bit much for one week. I’ll pick up on those in August along with handful of issues focused on the Batcave and its trophy items.
I need to look over the new superman reading myself, also jumping in on JL’s DCUBC this week along with the Renegade Bird people’s Red Hood! It’s great to have you swing by man and thanks checking out this weeks stuff!

While I appreciate the Golden Age influence, I just can’t take Captain Blimp seriously and found that story rather dull.

I am liking the other deep cut in these issues in Doctor Thirteen. I mostly know if the character from the great series of backup stories by Brian Azzarello and Cliff Chiang.

the Batgirl backup story in 'Tec #519 is written by Barbara Randall, who would go on to write two significant post-Crisis Babs stories in Secret Origins #20 and the Batgirl Special (a prelude to The Killing Joke).

Also notable for being the story where Jim discovers Barbara’s secret identity. Surprisingly not a bad story. I was worried at first because I HATED that Batgirl Special with a passion when I first read it.

Detective Comics #520 even seems to take some inspiration from the cover of Doctor Thirteen’s first appearance in Star Spangled Comics #122. 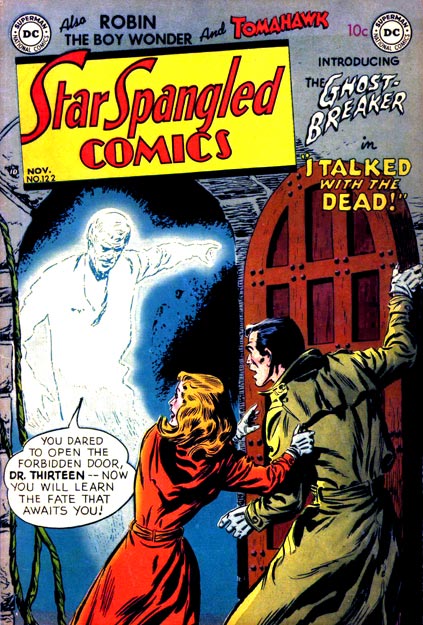 "Doctor 13: "I Talked with the Dead"": Dr. Thirteen is the Ghost-Breaker: a man dedicated to exposing supernatural hoaxes. This mission was given to him by his father and the two made a pact that five years after the latter's death, son Terrence...

I love how Conway’s run doesn’t require you to know all of these obscure references and characters to understand and enjoy it, but it rewards you if you do.

Oh, and I love how atmospheric some of the art is in that issue: 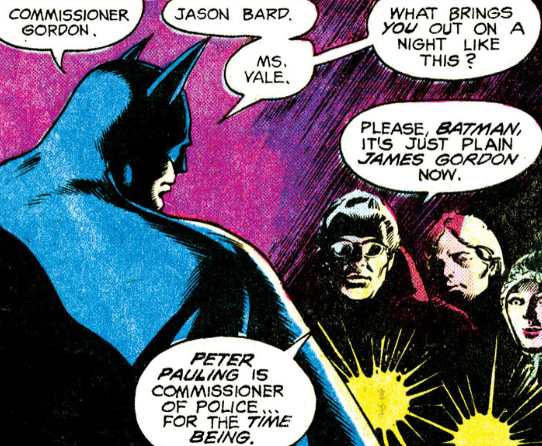 It was cool to see Don Newton’s first issues of Detective after reading so much of it during the Jason readings for Renegade Robins.

Speaking of which, this reading leads right up to the edge of where I started. We’ve stopped at Batman #356 this week, and the Jason Todd Book Club began with Batman #357.

. I just looked at is as a fun story and really liked the color use. It also just kinda reminded me of old pulp fictions which I love.

@AlexanderKnox, Never seen that comic will have to check it out sounds fun. Also really like the art work in them. That panels a great example of the look and feel to these couple of issues.