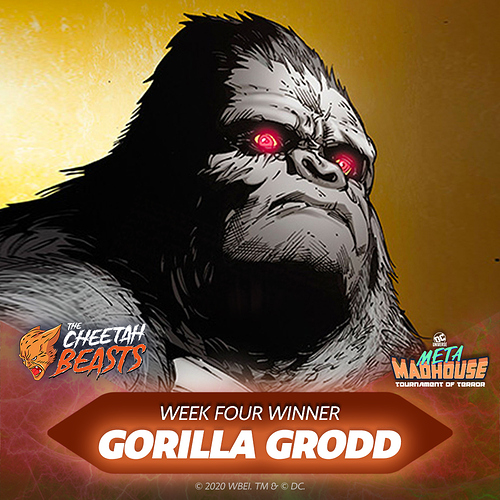 Be sure to tune into DC Daily to watch the official announcement!

The final roar has resounded through the grimy city streets, echoing off every skyscraper and thundering through the sewers beneath our feet. One mighty beast has fallen; Who were you holding out hope for, and why? Sound off in the comments below!

DC Daily will be revealing who, in the kingdom of the beasts, will join our Final Four Showdown; be sure to tune in at 3pm PT/6pm ET to find out who it will be!

If you want more ways to celebrate your Beastly spirit, check out these other topics below, or wear your pride by updating your profile!

This was probably my toughest bracket to decide on who should move up through each round. I also wondered whether or not this might be the bracket where the Lazarus Pit save happens in the later rounds since the others have occurred within the 1st and 2nd round of selecting. Will definitely be interesting seeing how the votes tally up.

I think it is hilarious & awesome that by my personal comic-book ‘logic’—because of who’s matched against who and in what order—I can see no one else but Dex-Starr logically taking this bracket. A Lazarus Pit save could stop that from happening, or I could just be calling it wrong, but still… Awesome. (I called Reverse Flash & Brainiac, so I’m two for three so far on actual bracket champion outcomes.)

I like this bracket. I think the matches are a bit closer on average than the others.

Penguin vs Man-Bat: One of a few matches that could go either way. I picking Man-Bat, but I wouldn’t be shocked if Penguin won.

Bronze Tiger vs Firefly: Another fight that could go either way. Bronze Tiger wins if he can get up close, but I don’t think Firefly gives him that opportunity. Firefly wins.

Owlman vs Orca: Alright, I probably voted for the wrong character in this one. See, I don’t really care about the Crime Syndicate, so I haven’t seen many Owlman stories, except for the Crisis on Two Earths animated movie. In that movie, I recall Owlman being strapped to a bomb and doing nothing to escape. I feel like if you are so nihilistic to not bother trying to save yourself in that situation, you probably won’t do well in a fighting tournament. So I voted Orca. If I knew the character better, I’d probably have changed that, but it’s how I voted with the info I had.

Catwoman vs Dex-Starr: Stat wise, Dex-Starr wins this. But I agree with the analysis that Catwoman’s affinity with cats charms Dex-Starr into a victory. A vote for Catwoman from me.

Magpie vs Gorilla Grodd: It’s my personal opinion that Grodd takes this bracket, lazerus pit upsets excluded. So, a vote for Grodd it is.

Black Manta vs Zebra-man: Sure, Zebra-man has the raw power to theoretically beat Manta, but he just really doesn’t have what it takes. Like the breakdown of the odds says, he could be one of the most dangerous villains in the DC Universe. He could be. He should be. He isn’t. Not because of his abilities, but because, powers aside, he’s a chump. Black Manta wins because he hits first, hits hardest, and doesn’t give up until Zebra-man is beyond defeated.

Penguin over Man-Bat. All his different tools will get the job done.

Killer Croc over King Shark. KC’s back for revenge, he’s determined to come out victorious this time around lol.

Pyg over Flamingo. He’s just so insane and unpredictable that I can see him cleaving Flamingo’s head in two with a butcher’s knife the second Flamingo gets close.

Catwoman over Dex-Starr. She’ll charm him into defeat.

Black Manta over Zebra. Zebra’s dumb and doesn’t make full use of his abilities.

Keep in mind that Owlman is essentially Batman. And not just any Batman: Grant Morrison’s Batman.

Everyone else has already lost.

Man-Bat over Penguin: penguin for all his bravado is fundamentally a coward. The Batman strikes fear into him. A bat with razor sharp talons. Oswald needs a change of undies.

KC over KS: people forget KC once worked as a wrestler. If he avoids the first bite, which I think he can do. He can get onto KS back and blind him, and then use leverage to crack his top jaw out of place. That will take out KS.

BT over Firefly: Firefly’s weakness is his ego. BT can bait him into just getting close enough that BT can leap up and deliver the one punch needed to take him out. Psychologically and angles of attack make this an upset.

Pyg over Flamingo: Pyg maybe even more nihilistic and brutal than Joker. Again the underpowered takes the upset because of sheer sociopathic ness and brutality. Flamingo can’t believe anybody but the Joker could be this sadistic and “nuts”, he will find out he’s wrong.

Owlman over Orca: All the lethality of Batman with none of the restraint. Owlman wins. (He knows there is a dimension where he loses to Orca, but it ain’t this one.

Dex over Catwoman: Selina can’t beguile her way into the heart of this kitty. That heart knows nothing but rage. A red lantern beam to the face before Selina gets her first purr out.

Grodd over Magpie: This is tough for me because Magpie is one of my favorite Bat villains. However, the only question here is Grodd’s choice of entree: Wings, breast, thigh or drumstick.

Black Manta over Zebra Man: the Z-man doesn’t have the guts. His first move is to cower before Manta’s energy blasts. This Zebra changes his stripes to reveal he’s a chicken. (I’m sure Grodd will still be hungry.)

Croc v shark- Croc wins. Shark bones are made of cartilage. Ribs are the weak spot. Croc being a highly defensed croc with his strength will destroy him.

Tiger v Fire- tiger wins. FF ego will get in the way plus tiger is a resource highly skilled fighter. Firefly has his weapons which could be disarmed from him.

Pyg v flamingo- pyg wins. Do t know much about flamingo but pyg is a gruesome killer. He has to capture his victims so I feel he has the skills to do it.

Mags v Grodd- Grodd wins. His strength and telekinetic abilities will make it easy to be mags.

Mant v Zeb- manta wins. The all powerful unbeatable zebra man will be a challenge. But with every once of his power manta will overcome impossible odds.

Can’t wait to see how the Pit wrecks me this round!

It’ll probably lead to victory for Zebra Man or something.

I’m suspecting Catwoman and that the corresponding article will say something about nine lives.

I’m suspecting Catwoman and that the corresponding article will say something about nine lives.

Oh please anything but that! It’s so plausibly awful.

I hope Penguin wins, I think everybody forgot about his umbrella, Penguin can win by shooting his way to victory. His Umbrella can shoot, stab, fly and has flamethrower!

I think he can win the first round, but that’s about it without the Lazarus Pit. That umbrella won’t help him next round against King Shark or Killer Croc.

That umbrella won’t help him next round against King Shark or Killer Croc.

Especially against Killer Croc. He could throw a rock. A big one.

But those are usually different umbrellas. Especially, shoot, stab, flamethrower. I’ve never seen a comic where two or all three of the options above are contained within the same umbrella.

I just posed this in the“ask the question” thread.

Well, I guess this will be an interesting story now for the Round of 8.

After the narrowest of margins, Man-Bat scores the victory against Penguin due to Man-Bat telling Penguin his formal gathering had been canceled because of social distancing guidelines in place.

King Shark looked poised to take a chunk out of Killer Croc until Killer Croc pulled out a can of Shark Repellent he had snagged from Batman.

Bronze Tiger said to FireFly, have you seen my prison battle royal along side Oliver Queen? FireFly fittingly decides to then bug out.

Owlman tells Orca that he is Owlman. Orca then decides to swim away to tackle other fish in the sea.

Dex-Starr, full of his rage, sets off the fire of his red lantern ring at Catwoman. She dodges because of her dexterity points while recalling the time she lost her cat Isis who at that time turned cruel and full of rage. This reminds her how to enchant Dex-Starr into submission to score the victory.

Gorilla Grodd tells Magpie to Kneel Before Grodd while smiling in General Zod’s direction to his dismay, thus sealing his victory.

And finally… The smoke settled from Black Manta’s optic blast where Zebra Man has become the joke of what is black, white, and red all over. Manta looks happy to take on Gorilla Grodd til he hears a giant splash. He thinks fine, if he has to deal with Aquaman to make it before the next round then so be it. To his horror, Zebra Man stands before him and repels him back to cancel his victory.

Talk about a beast of a first round!