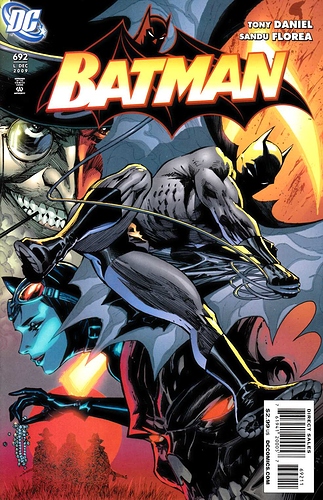 Hello all and welcome to another session of the Damian Wayne Book Club here at Renegade Robins. Last time Damian learned some very important lessons from Dick and Stephanie. This week Damian finds a friend (and ally) and Batman and Robin confront several old foes, including one that appeared in the Retroactive 80s issue read by the JTBC a few weeks back. Let us begin this adventure shall we? 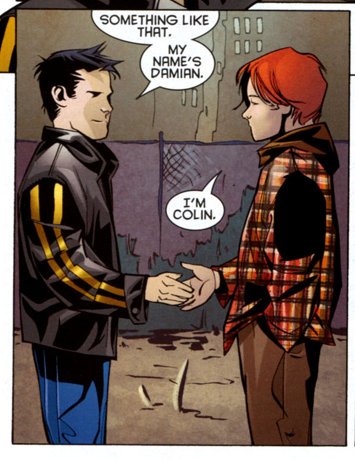 And a friendship is born…

Damian Wayne in Other Universes

Since there will be no new comics for awhile I’ve decided to replace “Son of Batman News” once a month with this feature instead. To get us started I thought I’d set up a poll to see what you all might like to see in this feature.

Which of these “other” Damians would you like information and comics or animated suggestions for?

That’s all for this week loyal fans.

Why do I only sometimes get notifications? [×]

How would you say the Reaper here compares to the one presented in the DC Retroactive 80s issue from a couple of weeks ago?

It’s kinda weird, since he’s actually based on the Denny O’Neil Reaper from the 1970s, but he behaves more like the Mike Barr Reaper.

Do you mean notifications of club posts at posting or are you talking about messages sent to your inbox?

There’s also the fact that he’s being controlled and he’s also undead. Strangely enough I had the same reaction to him as you did @AlexanderKnox. He was this weird sort of amalgam of O’Neil and Barr’s Reaper.

Also I really don’t enjoy Daniels all that much myself so these issues were hard to get through.

No…because I read the Streets of Gotham issues first.

As did I my friend. Actually I decided to keep on reading 'em just for fun.

Yeah it was great and abandoned entirely too soon as so much was with the reboot.

Come now why ever would he do that?

How would you say the Reaper here compares to the one presented in the DC Retroactive 80s issue from a couple of weeks ago?

Hard to compare in that the Reaper here had no real personality or drive outside of being a pawn.

Black Mask was up to his old tricks again from beyond the grave. Did his identity surprise you?

This isn’t the first time I’ve read this, and I honestly don’t recall if the reveal surprised me or not. I’m not really impressed with the story here, anyway, I just find the art to be beautiful.

What did you think of Damian"s detective skills in these Batman issues?

I liked it! It was awesome how he used his intellect in his appearances instead of being the brute force that he prefers to be. Which, I guess, is what Dick was going for.

What did you think of their partnership?

That was fun. I think Damian works the best when he has other characters close to his same age to riff off of.

Why do suppose that was?

I think he pretty much admits it within the story - Robin underestimated Zsasz. When he realizes what he’s up against, he stops thinking about how wonderful he is and just lets off.

On the books themselves:

Life After Death…well, it was exceptionally better than Battle For The Cowl at least, though that’s not exactly the highest bar to jump.

It’s weird because in a lot of ways it sort of feels like Daniel was just doing a slimmer, slightly-more-prone-to-wisecrack Bruce than it felt like Dick Grayson (outside of the mild bit of love triangle stuff between Barbara and Huntress that was settled, like, a decade previous). I guess maybe this story of Dick becoming obsessed after the death of the child caught in the crossfire is supposed to show Dick that he can be as driven and obsessed as Bruce could be, but I think Morrison and Quitely was able to do that far better in two and a half issues of Batman & Robin than Daniel does here.

Streets of Gotham, though, was pretty solid overall. I really liked the character of Colin/Abuse. In some ways, he feels like a Gothamized version of Captain Marvel/Shazam: an orphan with the ability to change into an “adult” while still maintaining his youthful spirit.

I think Daniel just wanted to draw a badass bad guy with a sythe and picked up the name “Reaper” to make it connect to past lore. No real connection.

Not really. I remember Arkham being Black Mask was mentioned in Daniel’s run of Detective during the Night of the Owls and assumed that it was probably the same here. Once Dick heard about the rubber bullets in Arkham’s gun, I knew it had to be the case – it was just one of those clear, obvious and memorable clues that you knew was going to be mentioned later.

I like that Damian was able to solve a lot of the moving parts of the story, but I also liked that Dick had previously solved some of it before him. While Dick may not be the World’s Greatest Detective like Bruce or as good as other Robins like Tim or Damian, he shouldn’t be a slouch in that department either.

It was cool. As others said, Damian really shines when he’s paired with characters who are similar and yet vastly different to him.

Again, as someone else said, Damian underestimated Zsasz and was so overconfident in his own abilities that he didn’t really have much of a plan.