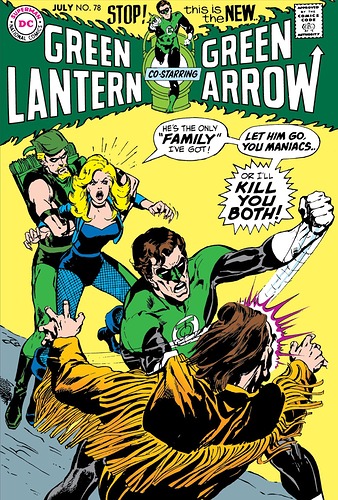 79, I liked the chaptered storytelling with them splitting up to come back together in the end. Definitely wasn’t surprised by GA’s deception, but can’t really blame him for trying, I suppose.

Didn’t know Superman made a motorcycle for Black Canary.

They introduced her as pretty awesome, but then she ended up being a typical damsel in distress. Really wanted her to take out the cult leader.

Definitely 79. While in a few ways it feels a bit like a retread of 77, I think the way that both heroes tried their own ways to solve the problem and they both worked to some degree was really well done.

I’m not sure if “surprising” is the right term, but when Ollie started dressing up as an Indian chief to scare off the people trying to buy out the land, I couldn’t help but think “Man, if Ollie tried this today, he would get cancelled for cultural appropriation.”

The fact that Ollie dressed in all yellow to get around Hal’s weakness was also hilarious. I feel like this was a prelude to what Frank Miller would do in All-Star Batman & Robin.

Seriously, I was kind of surprised by the two just slugging it out mano-a-mono at thte end of that issue.

Black Canary is one of my faves and she brings out the best in Ollie, so yeah, I’m definitely happy to see her come in. But I was also disappointed that she wasn’t involved much in the action. She really should have kicked that cult leader right between the legs.