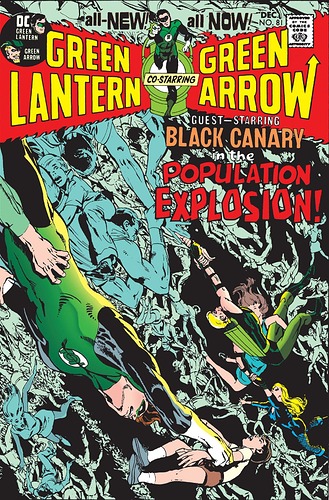 Hmm…I think I’ll go with #81. I thought that was the more interesting problem to deal with.

You mean aside from actually being on time with a Lantern Corp Book Club reading for once?

I was surprised at the team going to space. I kind of figured that the whole “traveling across America” thing would have lasted longer, though they can always go back to it and they left enough open that one can easily make new stories about this era if they wanted to. I think it was also a little warranted because honestly, after only four issues Denny was already kind of touching on the same themes and plot devices.

What did you think of the Guardian’s trial?

The first trial was interesting, very Kafka-esque. The second seemed more fair and kind of a fitting “end” for “Old Timer.” I wonder if we’ll see him again in this run or a future one.

I’d go with 81. Had better action and a more interesting story.

Not sure why Black Canary was suddenly with the group for the second trial. Also, nice to know that eons passing and life returning to a dead world can happen but the records archive is still in use and exactly where it used to be.

Still think it’s a bit much to think a single mechanic could overthrow the entire operation. Surely a planet of galactic lawering would need some better security.