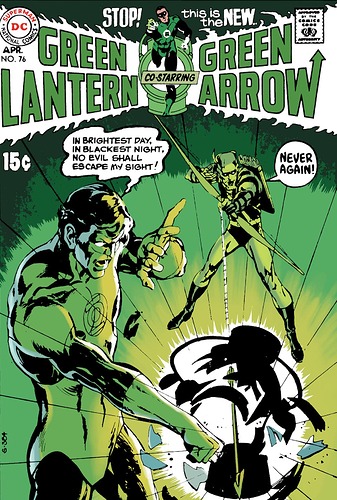 We’re reading through Green Lantern / Green Arrow, doing 2 issues a week. Please avoid spoiling anything from issues beyond this week.

Awesome! This is an iconic run of comics, and it’s been ages since I read it, so looking forward to talking about it with you guys.

#76 was my favorite this week.

Just the difference between Hal and Oliver’s tactics with the landlord. Would have been easier if they had worked together from the start.

Which hero are you enjoying more, Lantern or Arrow?

I haven’t read many comics from this time period so this will be an interesting experience for me. I’m not sure how much I liked the format of these two issues. It’ll take some getting used to.

Want really feeling either one. I’d probably go with 76 more, though.

Having the guardian become human was unexpected.

As much as I enjoy GL, in enjoying Arrow more from these issues.

Also, decided to read 73-75 as a lead up into these. They were completely unrelated, but not bad.

The scene in issue 76 where Hal gets called out for neglecting the problem of racism on his home world is still one of my favorite moments in any DC comic.

I think I would sooner give it to 76. It’s an iconic issue for what it means for the book and the industry in general, and I think 77 went a little over the top to the point where it kind of betrays the more street level approach to this series. That said, I did enjoy in 77 Hal going all out without the ring and still coming out on top.

Not especially? Like, that’s the downside of iconic and influential comics.

Which hero are you enjoying more, Lantern or Arrow?

Define “enjoy.” Because I think in some ways the book portrays both Hal and Ollie as very flawed. Hal is trying to hold on to this notion of the world being in a good place to the point where he almost allows human suffering. Ollie has his heart in the right place, but sometimes gets so passionate and enraged about things that he almost risks endangering the very things he’s fighting for. I think that’s what makes the dynamic work – they’re both very different, but have a common goal and can balance each other out.