Hey everybody!
This year marks the 10th Anniversary of the New 52, so we’re going to take a quick look at the run that changed everything for our lady, Harley: 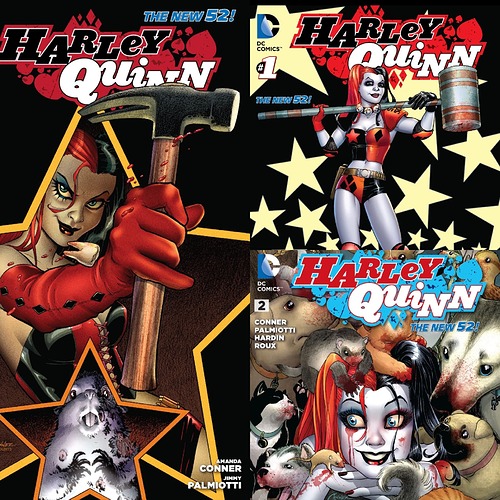 The entire run is open for discussion, but we’ll mainly be focussed on

We’ve also got another issue of HQAS: The Eat. Bang! Kill. Tour available in our DCUI library. Our discussion can be found

All are welcome- Stop by when you get a chance!

This activity will be running all month long!

You know the drill: We’ll take the first 2 weeks to read (9/6–9/19), then discuss during weeks 3 & 4 (9/20–9/30): Did you enjoy them? Have you read them before? What did you think of the dialogue, plot or artwork? Anything about the the reading you’d like to discuss—Drop your thoughts below when you’re ready. 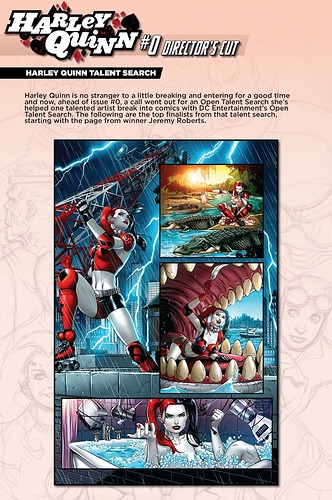 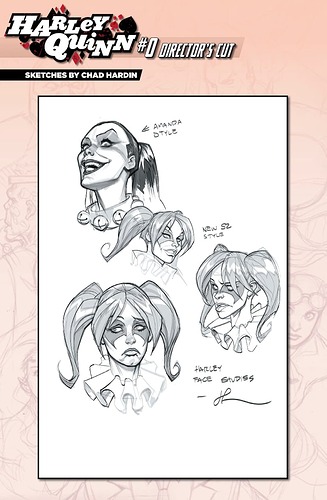 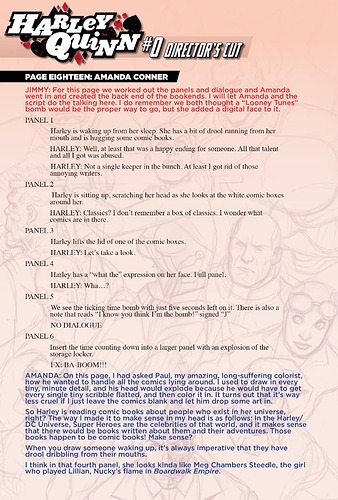 Alright! Another attendee for the New 52 10th Anniversary Party!

Yes, I know the above Harley emoji is Rebirth-based, but it’s derived from Amanda Conner art, so…close enough.

wishes we had legit New 52 Harley emoji, especially of her Suicide Squad design

Yeah. It’s the closest pic we’ve got, and unfortunately my emoji makin’ days are a thing of the past for now. 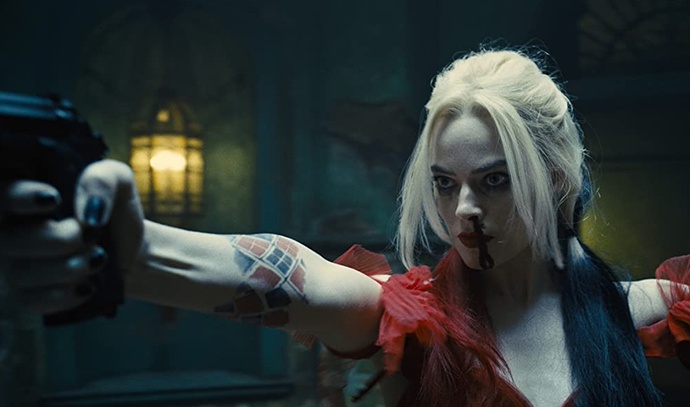 I definitely recommend giving that a read at some point, gives a really cool behind the scenes look at the making of the story.

It’s funny you picked one of the pages that mention the contest, because that actually had some controversy at the time because the page was supposed to be used as a contest for a fan or new artist to draw as part of the story. But people at the time thought that DC was making light of suicide and thought it offensive. The fact that they announced this on the same week as International Suicide Awareness Day didn’t help much either.

They did choose a winner as mentioned, but for the book’s release they ended up changing the contents of the page.

After a week or more of controversy, DC Comics have finally released a statement regarding the Harley Quinn comic art contest they were holding.

Agreed Queen @Razzzcat- the pink and blue is fun but our girl looks her best with the blonde, black and red. 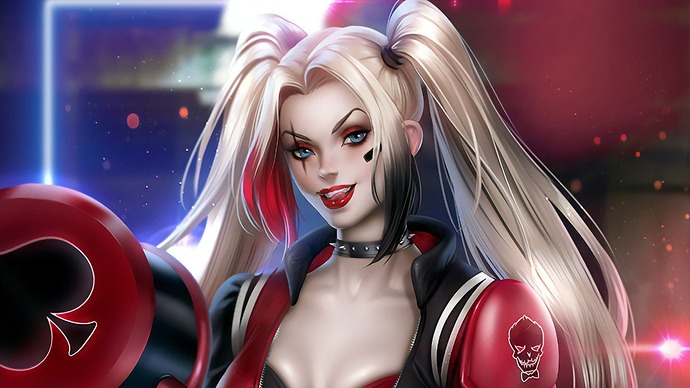 I wish she was a mix of redhead and brunette.

Of course, I’m biased as those are my top two favorite types of women, hair-wise.

IDK how well red and brunette would pair, but I’m eager to see, all the same.

SN: I was so glad they included roller derby in BOP.

) and I feel like the blonde roots go well. But, as a darkie, I gotta root for my fellow brunettes, so…

I definitely recommend giving that a read at some point, gives a really cool behind the scenes look at the making of the story.

Agree. Definitely interesting to get a little behind-the-scenes l​

I’d root for them too, along with redh-

suddenly sees the below image that he, up until now, had not seen but is very glad to have encountered 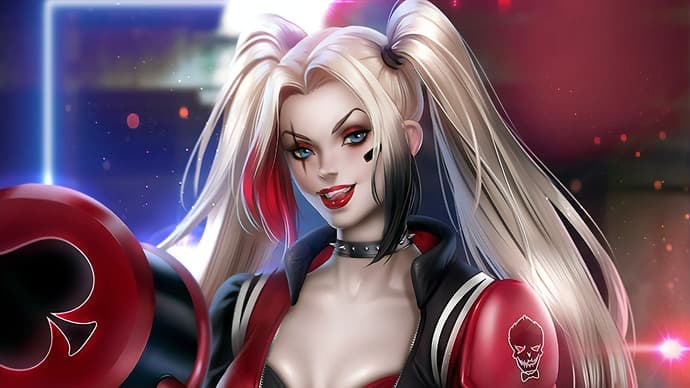 upon multiple views, his eyes roll back into his skull, a smile crosses his face and he says “The tongue.”, then lands on the ground with a thud, unconscious, but happy all the same

SN: I was so glad they included roller derby in BOP.

IKR? Loved watching Harls do her thing at the roller derby.

Groovy! I’ll have to get a viewing in before the clock strikes midnight. Thanks for the 411.

@DC89 Harley in the roller derby was one of my favorite scenes of BOP.

I forgot how much I enjoyed all the different guest artists and traveling through Harley’s mind—makes for a great intro to a series! A+

Gotta do something big for Harley’s double-quinceañera YESSS!!! I love Omnidog!!! Jess is one of those YouTubers that really tries to remain positive, unless he strongly dislikes a book and that is not very often.

The Comic Angel (okay, and some Comicstorian once in a little while) have been pretty much my main comic YouTube channels for a quite a long time now, too—for the same reason!

I almost posted his New 52 Harley Omnibus video, but this one fits.

Jess is a HUGE Harley fan and I know he has DCUI so I often wonder if he is in the community. I would love to chat with him about Harls on here.

On a side note, I am not sure if I have already mentioned this, I have the Harley vol.1 book on my stack of books. I have been sidetracked by webtoons and umm that other company that has new web comics on their app. So like normal, I will be reading the selection late.

Alright, I finally had a break in my other New 52 re-reads to once again gobble down these literary morsels of delight!

Thoughts: I love this volume of Harley Quinn.

The original series (that began in 2000) was kind of…meh (those Dodson covers sure were nice, though), so when this one began in 2013, I thought “I love Harley, but can she work in a solo ongoing this time around, given how lackluster what I’ve read of the original series was?”

If I wrote a Harley ongoing, it’d probably be just like this series was: heartfelt, zany, “fun” in all the right ways

and with an ample dose of pop culture references dropped in along the way.

I’ve been a fan of Amanda Conner’s since 2005 when JSA Classified debuted. Her Power Girl is quite powerful indeed, as is her Harley.

When I think of favorite renditions of some of my favorite characters, Amanda Conner’s takes on them are definitely among my top 10 GOAT list. She can do the serious just right, the comical and goofy to gut-busting grandeur and the cough other cough kind of art ain’t too shabby, either (seriously, JSA Classified #1 is just…yeah).

I’m glad that this series has had such a profound, positive impact on Harley and not only in the comics, but also her outside media representation as well.

The Harley Quinn TV series is effectively this series come to animated life, and I know for sure that a certain sizable segment of Harley’s fandom since 2013 can point to this series as their gateway into not just Harley, but the overall DC brand as well.

Upon breaking up with him, she worked to better herself and went on adventures with Selina and Pam in Gotham City Sirens (which is one of my all-time fav series to star Harls).

): Her second ongoing explodes in popularity and comes to redefine the character for a new DC Universe, while also largely redefining her for live-action and animated representations as well.

The Rebirth volume of Harley Quinn continued that revitalization with aplomb (while Palmiotti and Conner were on the book) and both it and the New 52 series serve as some of the most standout series of the last decade to have dramatically reinvented (and improved) a character that was already great from the get-go.

…and to those who’d argue Harley’s existence fits that two-part mold, I’d have to agree, as I’ve been a Harley fan since Day One in 1992, and have followed her entire evolution.

That’s something I take a reasonable amount of pride in, because how many other triumphantly amazing, awesome, very well-known beyond comic fandom and highly-influential, decades-young characters can most of us say we’ve followed since they debuted? For me, Harley is the one.

In conclusion, these issues were a lot of fun to revisit. Thanks, @Razzzcat!

SN: Harley Quinn Annual #1 is one of my favorite issues of this series. In print, the rub and smell part wasn’t so spectacular (a fun idea, though), but digitally, that’s not an issue (so to speak) and one can just enjoy the book, stank-free.

SN 2: @Razzzcat and @D4RK5TARZ Thanks for the mention of that fella with the Harley omni, as I subscribed to his channel.