Hi @DCFanArtClub, I wish we didn’t have to do these so often, but we need to take a break from our previously scheduled activities to remember another artist that the world lost this week.

Tim Sale passed away on June 16 at the age of 66. He was best know at DC for Batman The Long Halloween, Batman Dark Victory, Superman For All Seasons and Catwoman When In Rome. DCUI has put together a page that brings together all of his DC work here.

He had a unique and distinct style that was instantly recognizable. His ability to switch gears from the dark world of Batman to the bright daylight of Superman was really amazing to behold.

Last fall, we had a classic cover recreation week of his Batman Dark Victory series and it really seemed to bring out the best of our group. It was definitely one of my favorites weeks of last year.

This week, be inspired by Tim’s work and create any kind of a tribute you’d like. If you have any stories of meeting him in person, please share below as well.

Due Date: June 25, 2022
Discussion, works-in-progress and final submission all in the thread below. 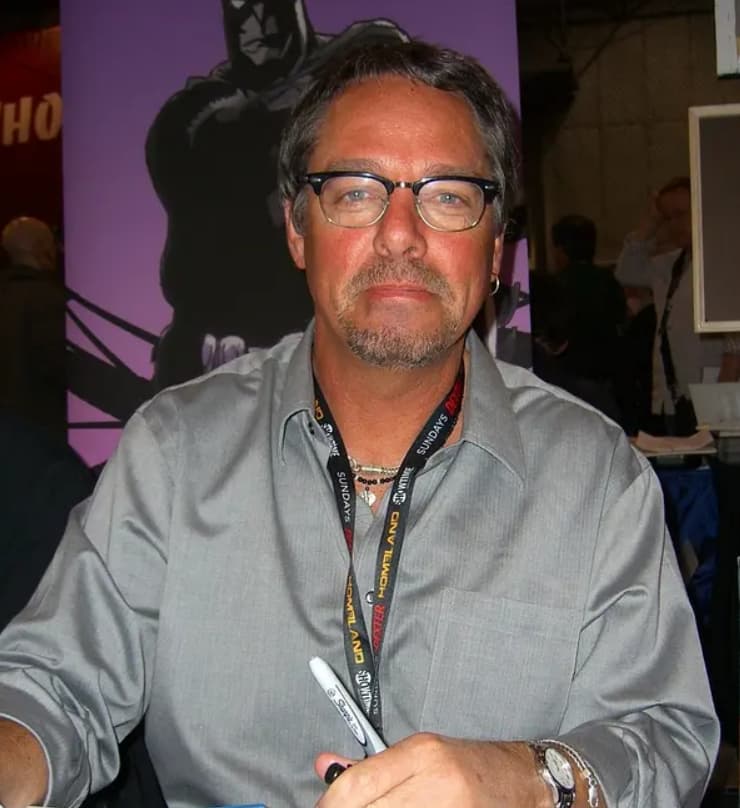 George. Neal. And now Tim.
Of the three, I was only fortunate to meet Tim Sale last year at my first ever comic book convention. He was a very nice soft spoken guy, and I was nervous to ask him to sign my books. Even more nervous when I shared my homage to the Long Halloween drawn with tiny pumpkins. He said he liked it which meant a lot to me. One of the books I had him sign was Superman for All Seasons book one. This one was special to me as it showcased Clark’s relationship with his dad Pa Kent. The writing was beautiful but the art really hit my emotional sweet spot. Mr Sale had a style that may have not been as complex as others but really dug down to the essence of each character drawn. His use of negative space continues to influence my work.
He will be greatly missed.
I will hopefully have a new drawing tribute later this week once I return from a family vacation. 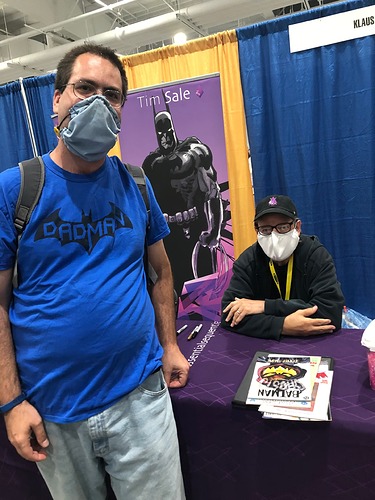 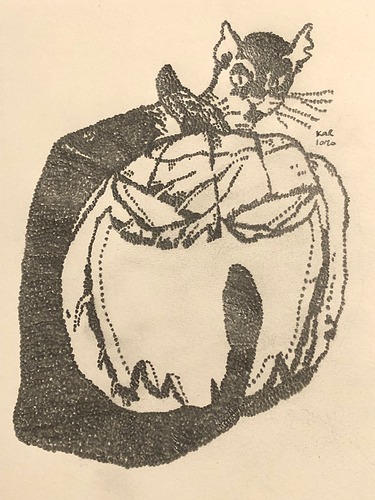 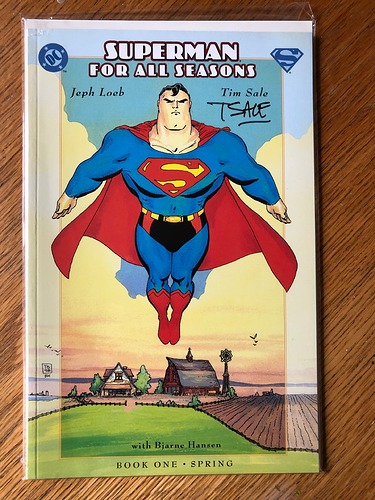 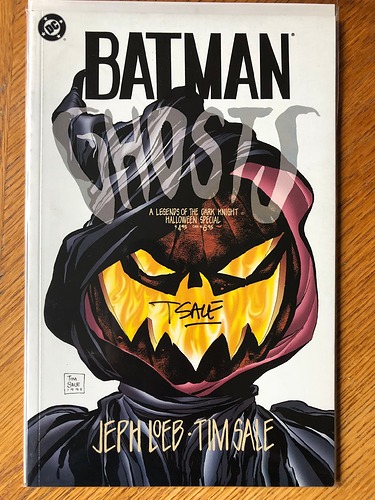 Man this is so sad. I’ll miss this guys work. So sad for everyone who was close to him, sounds like he was a wonderful guy. R.I.P.

What the heck! That’s three now. R.I.P. Tim Sale. Thank you for amazing work and showing you unique & inspiring art to the world.

Inspired by a panel in The long Halloween issue 1, here’s my Tim Sale tribute. 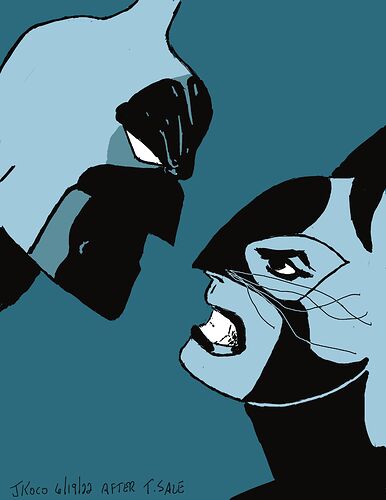 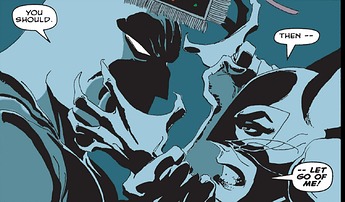 Rip. Started reading the Catwoman in Rome and thought of creating a series of covers I call, “The Mustard Seed and Ovary series”. It’s Catwoman learning from other Women which I have listed as; Batwoman, Huntress, Zatanna, Dreamer, White Canary, Philippus, and Indigo! 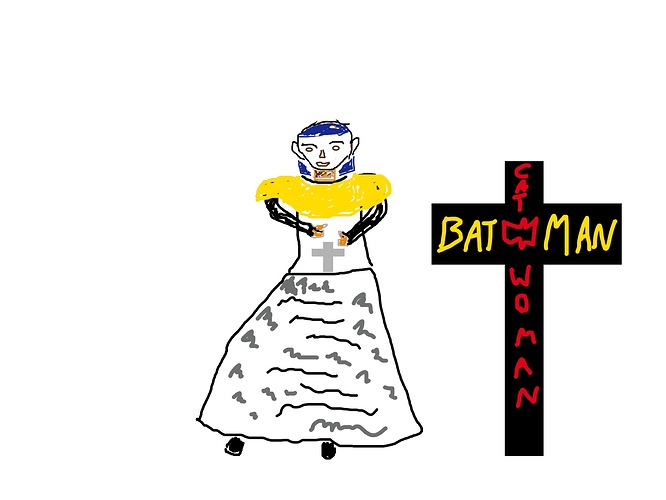 This is Catwoman as a Nun, perhaps cosplay or modern day spy or taking a vacation. But hopefully I can get it done this week.

.
And cool books. Enjoy the vacation

Can see the intensity.

so far. Cool name arrangements with the cross.

Long Halloween was the first Dc comic I read propelling me into the wonderful world of comics. And his art definitely was something to pull me in. Really enjoyed the cape work he did so want to make something with Batman’s cape for the tribute. Like how it turned out. 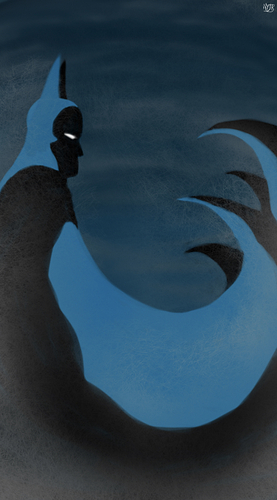 For my tribute, I drew his likeness in the Tim Sale style and blended him with Batman. 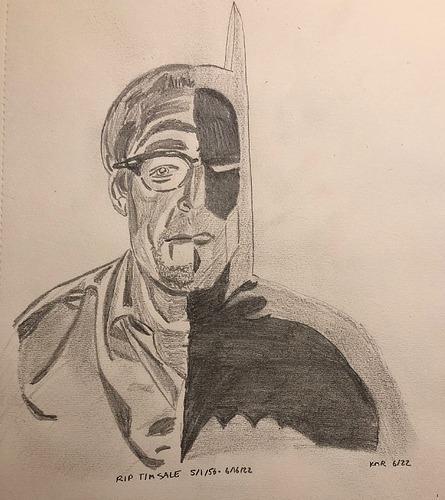 .
Seemless transition between the two. 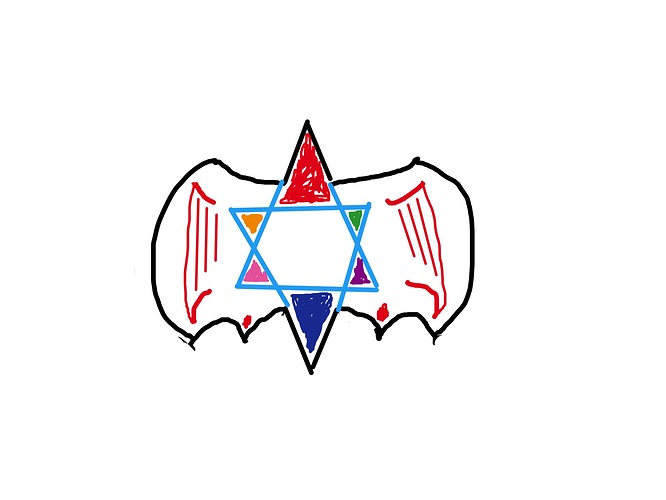 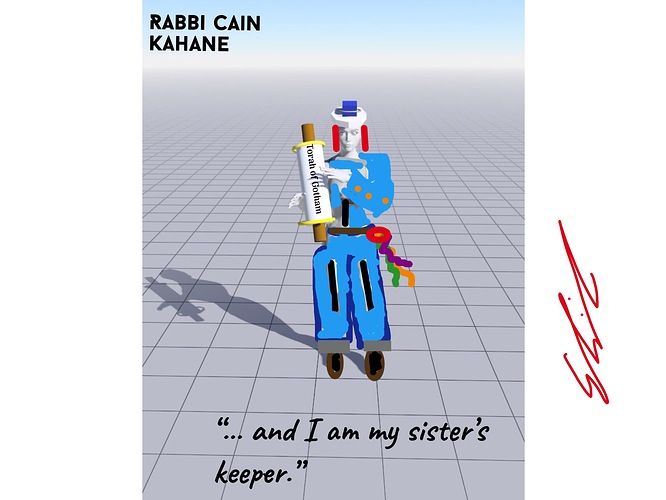 This is Batwoman re-imagined as a Trans-man who becomes a Rabbi and teaches Narrative Diversity to the Super Hero community. The logo was sort of derived as an amalgam of the Bat and Palestinian coat of arms logo. The 1st issue of Batwoman and Catwoman would be titled, “Friendship at the Gates of Rome”

In this picture Catwoman is dressed, or living as a Nun of the Order of Mary Magdalene. 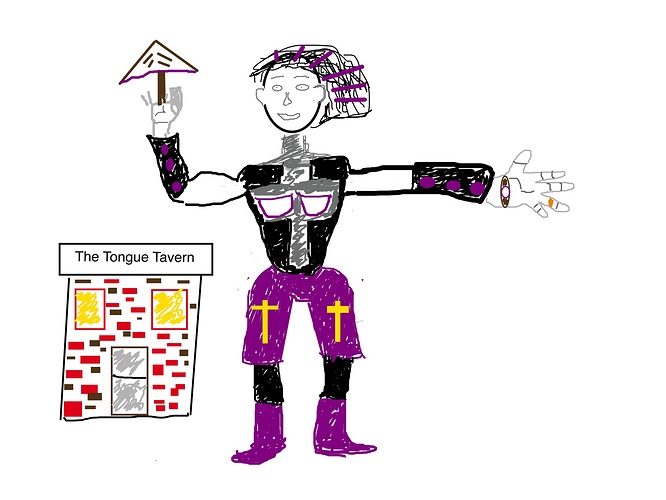 This is the Huntress and behind her is Tongue Tavern. Tun Tavern is the origin of the USMC. This would be a Pride Bar & Lounge of course. I would title this issue as, “Surviving as an Alley Cat”. I would link Orphanages and Animal Rescue in a City budget meeting. 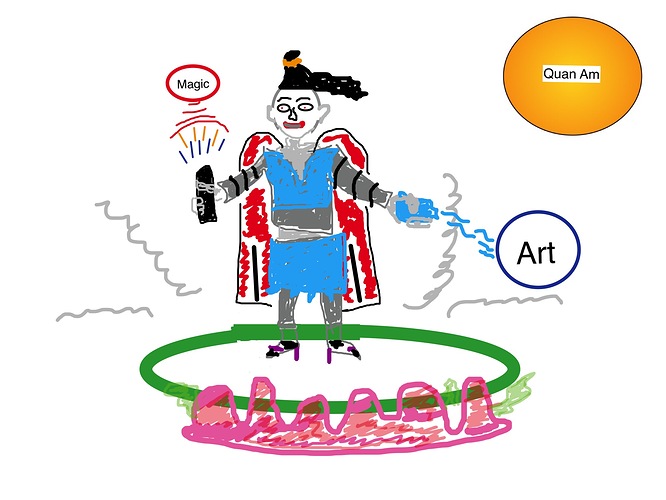 This is Zatanna re-imagined as Vietnamese and an avatar for Quan Am. The title would be, “Hearing Meow in the Void”. Her wand would also be a paint brush! 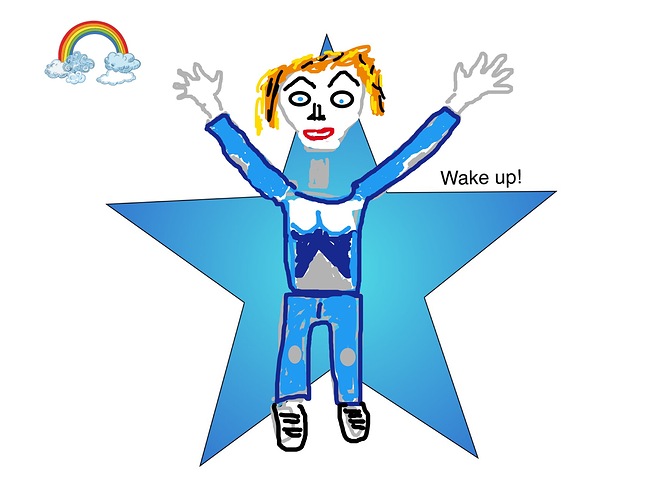 This one is titled, “Never wake a Sleeping Cat”. Dreamer would teach Catwoman to better her Catnaps. As we all know, Nia Niall is a Trans-Woman that’s why she’s here. 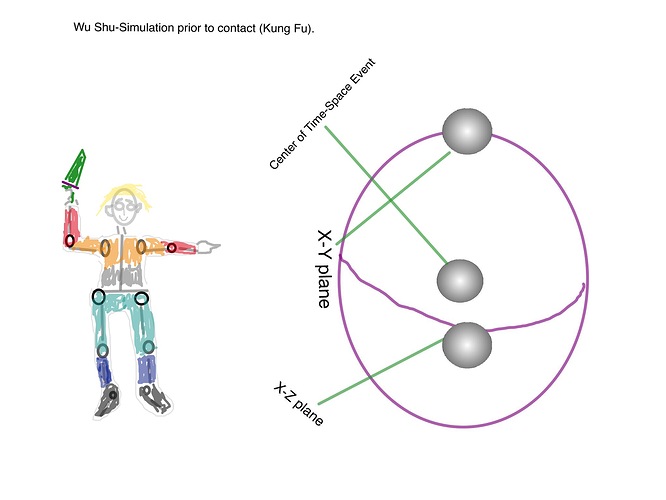 This is White Canary, Sara Lance with her Time blade. Seeing cats lick their paws, she thought Catwoman should be trained in Wu-Shu which I defined in the picture as a mental exercise prior to engagement. Call it Catwomans’ vision from Arkham City if you will. I would title this one as, “Urban Combat Vision”. Or UCV for short. Pun of UVC! 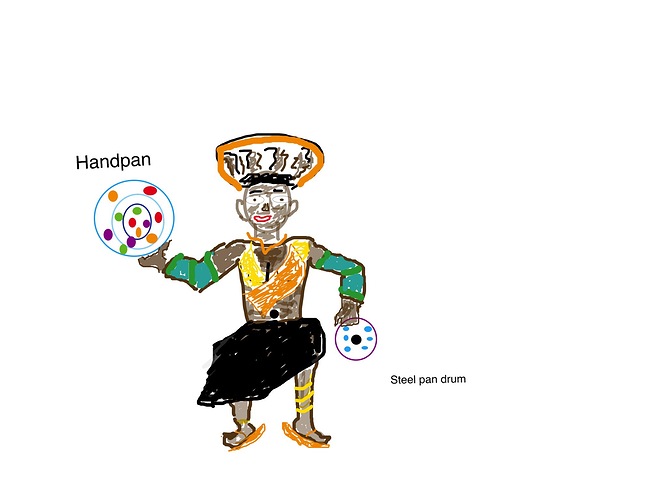 This is Philippus, the Amazon General of Strategy. I title this as, “The Power of Meow”. She is holding a Handpan and a Steel Pan drum. Both metal instruments with a unique sound. Both can be used to signal allies nearby. 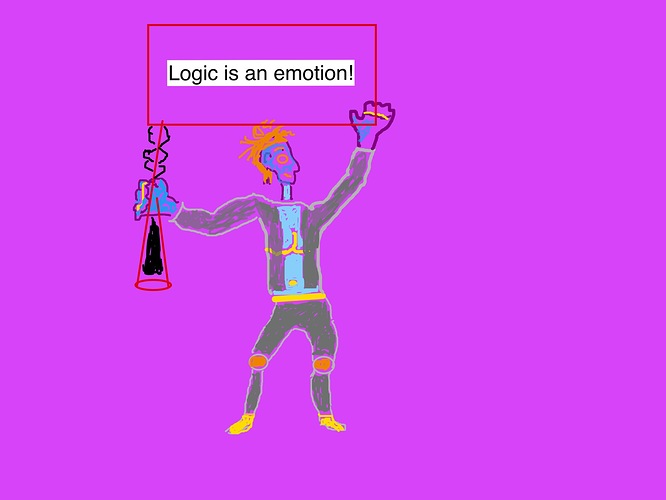 This is Indigo, aka Brainiac 8. I title this “Logic: The Hidden Emotion”. Sometimes emotions are necessary in a fight. Too much curiosity, as in waiting to process the surrounding environment can be dangerous. Just live and accept. Hence the saying, “Curiosity killed the cat!”

Thanks DC btw for this challenge. I learned a lot this week from it!

Wow, totally agree with NYJt3. That’s a lot of work and imagination!