Howdy y’all and welcome to the second installment of the Batman Book Club. This week we jump into a storyline by Grant Morrison with art by Klaus Janson. “Gothic” A serial killer from Gotham City’s past Mr. Whispers returns to terrorize its citizens! Explore the history of Batman’s hometown in this 5-part story.

As there are quite a few book clubs going on and I don’t want to make anyone feel rushed so lets give this a 10 day run.
Starting today, Aug. 11th till the 21th.
As before, no set of questions just talk about what you liked from the story or perhaps what you didn’t like. Just share your thoughts and as always happy reading :).
Link for fist issue in run below for convenience: 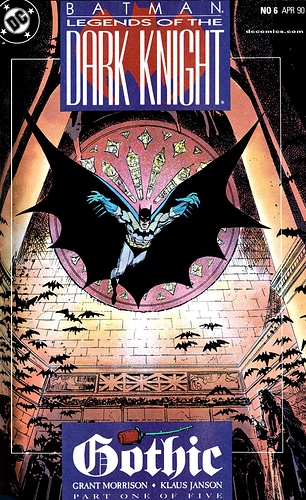 Cool – I read this one some years back, definitely feels about time to read it again.

I’m probably better off avoiding the headache of summarizing a Grant Morrison comic, so instead, I’ll identify the literary quotes from the first issue:

I should have noted that the first volume was entitled “Man Without a Shadow,” which is probably an allusion to the Adelbert von Chamisso story “Peter Schlemihl,” a tale about a man who sells his shadow to the devil. Now to the second volume, “The Death Ship.” https://www.dcuniverse.com/comics/book/batman-legends-of-the-dark-knight-1989-7/f404801a-01bd-40ea-8f76-f6baf5040a37

After we get through 20, we should do a once a month (or every 5 rounds) look at a supporting character. Starting with Dick Grayson. Maybe Nightwing New 52?

@AlexanderKnox: props for posting some context to the literary elements of this story! And funny you should say that it’s folly to summarize a Grant Morrison comic, because I remember this being one of his more straightforward works.

As for supporting characters, I had the idea that with the finale for Pennyworth to do something with Alfred, probably the last arc of Scott Snyder’s run on All-Star Batman, “The First Ally.”

I’ve been really busy the last couple days, but I think I’ll be able to read through this tonight. Not a Morrison fan (like, at all), but we’ll see if he can win me over.

For the next phase of the book club, I was thinking some Golden Age stuff (at least the first appearances of Batman, Robin, and the Joker) and then maybe picking a one- or two-shot from each decade to work through (if I spring for the two-shots, this would take two weeks, but it could probably be wrapped up in one with only one issue per decade).

Jay_Kay’s idea is more timely, though, so I’m down for that. Should we say the committee can rotate Aquamon-Jay-Bats with four club meetings each? Or Nathan can be the fourth committee member as our resident New 52/Rebirth expert if he wants to do his idea. I mean, I’d be down for supporting character spotlights, but I’d probably pick more late-'90s/early-'00s kind of stuff than '10s, because there were more and better specifically Bat-Family-related titles (other than those focusing on Batman himself) during that stretch.

Jay_Kay get out of my head! yes I was thinking of doing that comic on here.

@Nathan.Payson Vroom already does that with the Superman Book Club and was planing on doing something similar. He just had Steel and before that Supergirl.

Why would I leave? I’ve set up a nice cosy little place to read and everything. It even has an ottoman!

Seriously, I wouldn’t mind doing that rotation, though I did have an idea for a theme month in October, or at least one week out of it.

Anyway, finished the first issue, really good set up – you know things are messed when the crooks are coming to Batman for help.

Wait, let me guess: The Long Halloween for Halloween Week? Because that’s definitely got to happen.

As for the story at hand, I just finished it. And I definitely enjoyed it more than some of Morrison’s other work. The horror angle was cool, interesting, and creepy. But it relied on inexplicable prophetic dreams, random coincidences (like the killer actually being the headmaster of a school Bruce attended right before his parents died), and plot threads that were dropped without much fanfare (like the gangsters turning out to not actually matter in the slightest). Plus, Mr. Whisper’s attempt to kill Batman with an unnecessarily elaborate death trap feels completely out of place with the rest of the story’s tone. Even knowing that Morrison is a Silver Age buff doesn’t really make it any better because this is a very not-Silver-Agey story. Morrison is a very style-over-substance kind of writer and I’m a very substance-over-style kind of reader.

Actually, now that I think about it, here’s how the World’s Greatest Detective cracks this case:
1: Has a bad dream.
2: Is reminded that he coincidentally met the main villain when he was a kid.
3: Decides to go get recordings of the villain reciting poetry for some reason.
4: Compares those recordings to some other recording, which is actually (accidentally?) a recording of his father saying some irrelevant phrase.
5: Follows up on that irrelevant phrase and it’s the right thing for some reason.
6: Gets a truckload of exposition dumped on him by some random abbot.

And I know this is happening because magic, but I can swallow magic a lot more easily with internally consistent rules and reasons it works the way it does.

Actually, because of the release of Joker, I was thinking of doing a Joker themed week, specifically stories that focus on his early history and/or where Batman isn’t as big a part of the story.

@Jay_Kay: A Joker week would be interesting. I was thinking about covering The Laughing Fish. I’ll see if I can work the logistics out on that. Or I can go next and let you have October. I didn’t want to stick myself ahead of you, but if you have plans, I’m not set on my ordering.

On the subject of Gothic, I still have mixed feelings. I think I enjoyed it a lot more when I was reading it than after I thought about it a little. Am I overthinking?

@AlexanderKnox While Gothic refers to Germanic or ‘Gothic’ peoples, the word itself comes from Latin by way of Greek. I don’t believe the Germans used it to describe themselves, but rather how other peoples described the Germans. Sorry is this post comes off ticky-tacky. Hard to correct while not coming off a dick, but had to defend my boy Morrison. Haven’t read these issues in a while myself, but have them hard copy. Try to bust them out before the deadline. Happy reading everyone! 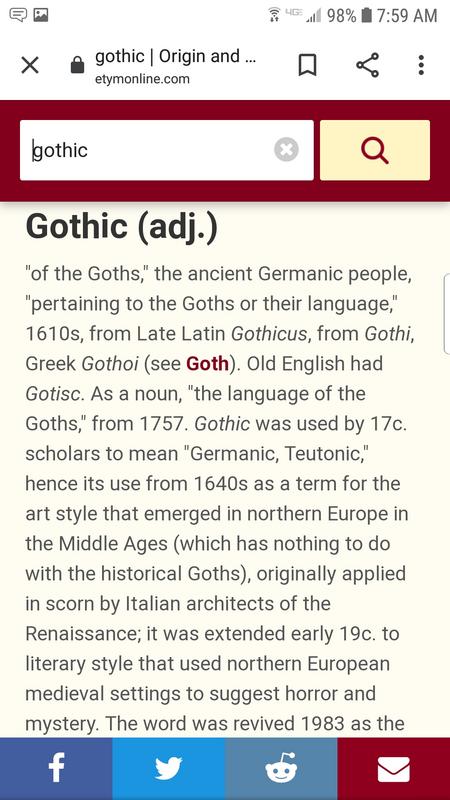 It came into Greek from proto-Germanic sources. It is completely unrelated to the Greek word goeteia.

As for my actual feelings on this story…I like it, with some reservations. After all of Bruce’s skepticism about the supernatural in the previous LOTDK story, it’s a little jarring to find him so open to things like Goetia during his second year of caped crusading. The villain feels like a rough draft for Doctor Hurt from Morrison’s later run on Batman. It’s pretty entertaining, but nowhere near as good as his previous Batman story, Arkham Asylum. At least it has a fun death trap (as a good Batman story should) and some interesting little dream sequences peppered throughout it. I think I prefer it to Shaman, but I generally favor Morrison over O’Neil anyway.