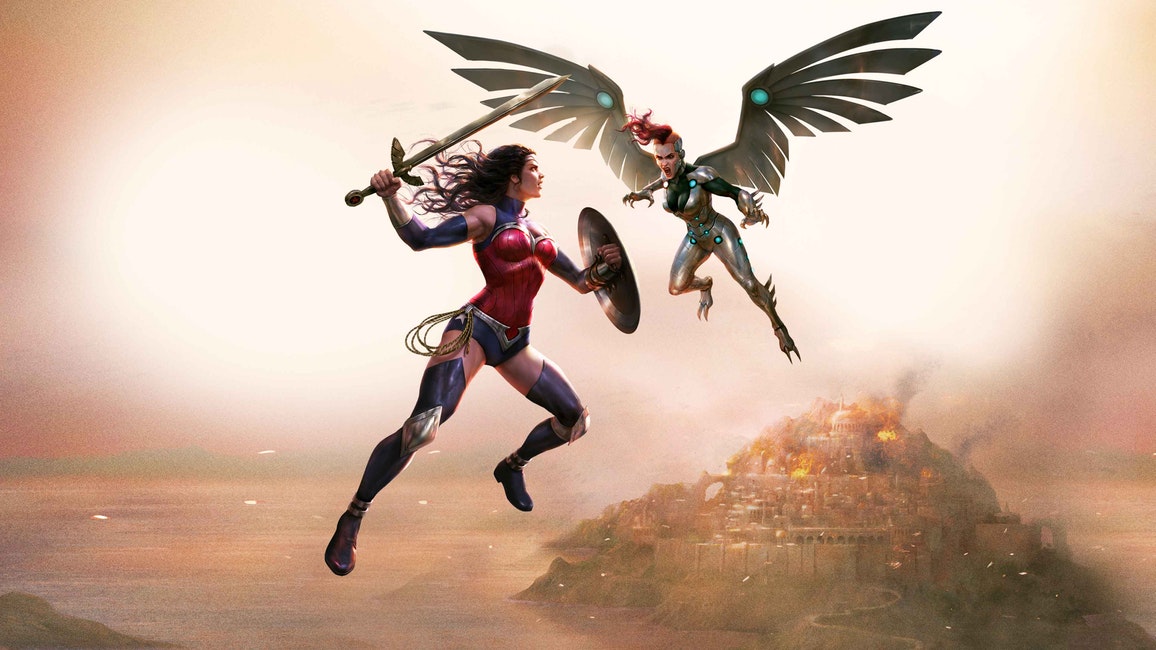 When Amazon princess Diana of Themyscira chooses to save fighter pilot Steve Trevor, it’s a choice that will change her world and ours. Fulfilling the role of both ambassador as well as protector, Diana earns the name Wonder Woman from the gracious people of Earth. But her heart is as strong as her will as she is determined to help a troubled and embittered young girl whom has fallen in with a deadly organization known only as Villainy, Inc! Get ready for an exciting adventure packed with brutal battles, myth and wonder!

If you haven’t watched Wonder Woman: Bloodlines yet, make sure you do then come back here and let us know what you thought!

Also, we’re having a watch-along today and on Sunday if anyone wants to join.

And for those who wish to listen, I reviewed Bloodlines on my podcast: Episode 15 by The Chris-Cast • A podcast on Anchor

Okay so I just finished watching this movie and I ABSOLUTELY LOVE IT! Instantly put it in both my Best of WW and Favorites Lists! I’m just gonna go ahead and start gushing lol.

This movie really made me care about the tragedy of Silver Swan as a villain a lot more, especially since Diana finally managed to get through to her in the end, which is so uncommon to see in the comics. The fight at the end against Medusa was nothing short of candy-coated awesomeness! I loved how they even adapted the strategy Wondie used when she fought Medusa in the comics of using her own snake venom to blind herself so she could keep fighting! At first I thought it was kinda weird how they made Giganta reliant on a serum to grow but it totally makes sense that they’d do that so they could set up the giant Medusa fight at the end, which for me is more than enough justification! I love how, in her fight against Cheetah, when it was clear she couldn’t keep up, Diana just moved the fight somewhere more constrained so Cheetah couldn’t run around as much. I thought that was really clever! I was really surprised to see Ferdinand and the Purple Healing Ray too. After all this movie is supposed to be in the same universe as Justice League: War (I’m pretty sure anyway) and that was based on a comic that was trying to do a serious and realistic take on DC’s heroes (screw that “darker = better” mentality btw) and the image of a friendly Minotaur cooking in Diana’s kitchen is just something that’s fun and obviously not to be taken seriously.

On that note, I’m glad everyone at DC seems to agree the whole Wonder Woman/Superman pairing was a mistake. Relationships formed for the sake of making a “Power Couple” rarely last because they’re centered on superficial qualities first and foremost. I ship Diana and Steve all the way.

I actually thought Bloodlines was going to be a sequel to Wonder Woman (2009) but now I’m glad it isn’t because I think I like this movie way better than the 2009 movie. There are things that annoyed me in that one, namely Steve constantly acting like a pig and Diana constantly being sexist up until the end. I was really glad there was no sign of those attitudes here and it was just a fun ride all the way through!

10/10 Will most definitely watch again.

Watch-along just started if anyone wants to drop by!

Just got done watching it. Loved it. Easily a 9.0 to 9.5 out of 10. Only thing I didn’t like was the pointless change to Etta and I’m not talking about her skin color. I’m fine with that. Just thought it was unnecessary to explore her sexuality, same with Diana and Steve. The story still would have been great, if it was just about relationships between parents, children, and friends. Again though, I loved it over all and it would be ridiculous to knock it for one minor (Yet pointless and unnecessary.) issue.

It’s actually based on the comic and also comes across naturally, not forced. I like it…

appreciate how they utilized several villains and had more than only Diana’s main storyline going on. Usually people just think of WW villains to be cheetah and random choice of greek god …nice to see several different types with dr.poision, cyber, the girl who ended up not staying a villain, medusa and etc. Cheeetah, giganta… etc…nice to see her having an actual rogues gallery that can be memorable and unique to her.

That’s a huge positive about this movie! Her villains can be just as great as Superman’s and the Flash’s. It’s awesome we got to see so many, and like you said, that they were all unique.

Still kinda wanna see a fight between Silver Swan and Black Canary. That has to have happened in the comics, right? That feels like a thing that’s happened.

This film blew me away!

Same. That final battle had me on the edge of my seat!

I didn’t really enjoy up until the end. Don’t get me wrong. It was good. But I felt more cartoony than the others. It also felt a bit rushed. There were moments like when Wonder Woman and Cheetah fought in the jet, that just felt kind of rushed. I think it could have been better, but the end was pretty good.

Honestly why did it take so bloody long to bring this movie to DC Universe. I mean it had already been out both digitally and on Blu-Ray/DVD yet it took several months just to bring it here. I loved every minute of this movie, yet it should NOT have taken as long as it did to come to this streaming platform. Usually the day they go to DVD they’re appearing right here on DC Universe, and yet for this one, it took far longer than it should’ve (by the way, we should be getting the movies and anything streaming here on DC Universe the day it comes out on digital, not when it comes out on DVD, otherwise for us that have the sub, what’s the point).

This movie was amazing in every way, from the Wonder Woman live action suit to all the characters that came up. I was loving this movie from the moment I hit play, this was amazing. Now we just need a movie for the rest of the Justice League characters, animated or live action (though I would prefer live action, and in a way that Marvel did it, considering that they were the ones that set the standards for super hero films, just saying). Either way, we need more Justice League members with solo films, and not just Bats, Superman, and now Wonder Woman, we need them ALL.

Solid movie. I liked her alternate uniform etc. My only complaint is can we not portray a minority woman as some portly lesbian who’s end of movie claim to fame is to be grabbed up on some Amazon women. It really cheapens the film and is disrespectful. Not once did I go “ha that’s funny” in that regard.

At the start it looks like it was gonna be another movie about her origin, but it turn around quickly, in a way you know what’s gonna happend at the end and still is enjoyable to watch.

I liked it. All characters are enjoyable and likeable, well, maybe Vanesa kind of overreact to the situation lol.

DC Universe changed their policy on getting animated originals. They are now 90 days after their physical release (I believe the physical release). Why not put it on sooner? I am sure it is hurting sales of the physical and digital and that would be problematic for future releases. Besides, if you keep checking, most of the animated movies go on sale for a really good price, so you may want to keep checking for that, because the BluRay comes with digital copies…

REALLY enjoyed this move. The Cheetah fight is pretty fierce. I am glad that WW’s cast of characters are finally making it to a screen in some capacity. Cannot wait to see more from her.

Loved it. I always appreciate whenever we get a break from Batman (no offense). I’d LOVE to see this version of Diana’s story continue in more films. It took 10 years to get another animated solo Wonder Woman film, I hope we don’t have to wait as long for the next one!