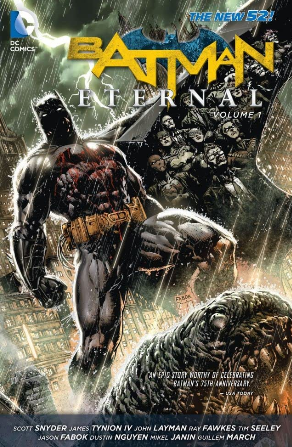 Welcome to a special Multi-Month Event from World of Bats: The Batman Book Club! and the Renegade Robins Club! For the next three months, we’re reading the weekly series Batman Eternal, consisting of 52 issues! That’s 4 issues per week!

Join the Bats and the Robins today! (If you’re not a member, feel free to contribute anyway!) We look forward to thoughts from @WorldOfBatsBookClub and @RenegadeRobinsClub!

Poll Question: Have you read Batman Eternal before now?

Looking forward to rereading this book and talking about it with you guys.

If you are unfamiliar with this story’s placement in the timeline, then let me help you out. We’re in New 52 territory here. While Scott Snyder’s Batman run was flashing back to Zero Year, this series (written by Snyder and a team of writers, most notably James Tynion IV) kept the present-day story going in the interim.

Here’s the Snyder-Bat timeline so far:

Thanks for that timeline @AlexanderKnox.

I might peek in on this although to be honest I never finished this back when it came out. I’d gotten burned out on Snyder’s run by this point and Tynion’s involvement didn’t help since I’m not a fan of his work for the most part.

I’m definitely down to read this series. It’s cool to read with everyone. I’m not the most analytical person and I can’t usually express things that great or give interesting insight but again I’m glad to be motivated to read something I’m not sure I would have otherwise.

In regards to issues 1-4, I should point out that some of the supporting characters were introduced early on in the New 52 reboots of Detective Comics and The Dark Knight. You should come across them if you read the equivalent of the first trade paperback volume or two from each series. There are some other characters who have been around since the 1980s, such as Harvey Bullock and Maggie Sawyer, so I assume that everyone recognizes them.

Speaking of recurring characters, we have three notable ones here:

First thing that I guess pops into my mind is that Gordon is really a flight risk and denied bail? Yeah, I don’t buy it. Seems unlikely to me.

Pyg just doesn’t really appeal to me as a villain.

They’re really leaning heavily on the connection between Gordon and an international (interstellar?) superhero as a justification for denying bail.

Carmine Falcone fans are lucky this month: you can read Batman Eternal and The Long Halloween along with us! Double the Roman, double the fun!

We’re looking at issues 5-8 this week. In the first of those issues, we get Batman saying that things haven’t been the same since the Joker, Damian, and Dick. What’s he talking about, you ask? Well, the Joker reference is in light of Death of the Family, while the Damian nod refers to recent events in Batman Incorporated, and the Dick allusion connects to the miniseries Forever Evil. (In case you’re curious about Dick’s whereabouts, check out the Grayson series.)

Issue 6 gives us appearances by Luke Fox, aka Batwing (as of Batwing #20), and Duela Dent, aka the Joker’s Daughter. The latter appearance may be confusing for anyone who just read Countdown to Final Crisis with the Renegade Robins Club, but the New 52 revived Duela and retold her story in a Forever Evil tie-in and a one-shot issue. She has recently been causing some problems for Catwoman, and she will soon join the New Suicide Squad.

Nothing really to say about the other two issues.

I thought it was a great start – from the crazy cold open of Bruce chained to the signal while the city is on fire, to the inciting action of Gordon being framed for manslaughter. It was also cool to see how they reintroduce Stephanie in this story – it feels true to who she was in the past, but with a strong importance to the plot, and a little added twist.

Jason Fabok absolutely killed it with his first three issues, and while Dustin Nguyen also does a great issue, it also highlights one of thet issues of a weekly title and that’s how inconsistent these books can be in terms of artwork.

We’re on issues 9-12 this week, and if you need even more content related to this series, you can check out this read-along of the spin-off, Gotham by Midnight!

In this set of issues, we get a few callbacks to Grant Morrison’s pre-Flashpoint run, including characters from Batman RIP and his first volume of Batman Incorporated.

We also get a rebooted version of Julia Pennyworth, who was first introduced by Gerry Conway in Detective Comics #501-502 and then played a significant supporting role in Doug Moench’s subsequent run. This new version is quite different.

Speaking of rebooted characters, I’ve neglected to spoil the presence of Stephanie Brown in this story so far, If you’ve never read the initial telling of her origin, be sure to check out Detective Comics #647, 648, & 649. She was dumped after Flashpoint, but now she’s back!

We’ve made it to issues 13-16. Jason Bard is cracking down on Gotham’s corruption!

I really hope you’ve read the aforementioned Black Mirror so that you have some context for this story’s take on James Gordon Junior. He was first introduced in Year One and made subsequent appearances in early years stories such as Night Cries, but Snyder largely reinvented the character during his run on Detective Comics. (James Jr. is not to be confused with the commissioner’s ill-fated pre-Crisis son, Tony.)

Getting to see some more of the different plot elements come in, which is nice to see. The stuff with Harper Row and Red Robin starts off with a bang – nanobot swarms are something you don’t see everyday, even in Gotham.

The Spectre teaming up with Batwing is something I NEVER thought I’d see. I like that this book really gives an effort to try to bring in every member of the Bat Family available. What’s cool is that I didn’t realize that Luke was established as a tech-head here, I thought that was something that Tynion made in his Detective run so that Luke can better replace Tim.

Love how this part added in a lot of Batman Inc. members, from Batman Japan to El Gaucho.

And it’s good to FINALLY start to see Jason start to play a role in this! It’s cool to see him and Barbara team up, and for him to be the cool and collected one for once.

Personally I find it WILD that they had Ian Bertram do the art for #11. I mean, if any issue here so far fits his style, it’s that one, but it’s just not what I would expect in a “standard” Batman story.

As we move toward Halloween this week, we read issues 17-20 of Batman Eternal! Appropriately enough, we get Deacon Blackfire (familiar to anyone who has read The Cult, which is established here as only semi-canonical in the New 52), Killer Croc, and some other spooky delights.

In these issues, we see a reference to the fairly recent Forever Evil tie-in Arkham War. Oh, and Red Hood gets really ticked off about child enslavement. I suppose that sorta balances out Jason’s removal from the Deacon Blackfire flashback. Kinda.

(familiar to anyone who has read The Cult, which is established here as only semi-canonical in the New 52)

Still not to that point yet (I think I’m on #15 right now), but I do think it’s interesting how around this time it seems like they were trying to add more of those classic stories in a way that at least kinda sorta fits in the canon. Around this time they were also doing Zero Year which while I don’t think they said as much, I think was their way of trying to have some version of No Man’s Land.

Here are some of the characters featured this week:

I’m caught up now to issues #24. It was good to see The Architect again.

“None of us Robins were ever as good as Batgirl. We knew it. Drove us all crazy. She’s got the legs of a ballerina and the brains of a librarian… I think it was because she didn’t do what she does for revenge. Not like ol’ dead Nightwing or me. She doesn’t fight for some ghost. She fights for someone alive.”

I’m not sure how much I agree that none of the Robins are as good as Batgirl but it was interesting to read anyway.

First off, can I just say DAMN those are some amazing covers by Dustin Nguyen? Just hauntingly beautiful work. His art for 15 and 16 inside the book was also really good, really fits the horror vibe of what they were doing with the main crux of those books. The art by Janin and Fabok in the interiors were also really good – this was just a really good bunch of art this segment, love to see it.

Anyway, I liked how they did some big forward momentum with the gang war, Jason Bard comes off like a true successor to James Gordon, and with how things are going, that might be needed more than ever.

Some nice progression with Tim and Harper’s story, and their unique story with the nanobots. It’s funny seeing Harper’s sort of superhero look, since it basically feels like a blue Grifter mask.

The story with Gordon and James Jr was also great, really testing Gordon as a character, and James is a great foil to test Gordon’s trust and faith in the system.

But the really cool sequence I thought was Batwing and Corrigan’s investigation into Arkham Asylum. Maybe it was because I was reading it at the right time of year, but it was really spooky and intriguing to read.

First off, just want to say I haven’t read any of Eternal yet. I’m new to the DCU app and I didn’t even realize there were book clubs on here!
This is so fun, I’m really glad there’s people on here organizing this stuff. I’ve been re-reading the Snyder/Capullo run so I could get to Eternal, glad I have you all to motivate me! Thanks everyone!

Welcome to the Community! Glad to have you hear and looking forward to your thoughts.