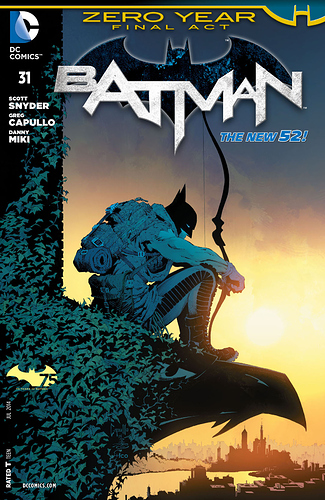 Welcome to the FIRST of what we are calling the World of Bats Casebooks: where we take a large, complete story that would be too long to do within a single week. And what better origin for this series than the New 52 origin of Batman, Zero Year, written by Scott Snyder and drawn by Greg Capullo!

Starting today, January 4th, to January 31st, we’ll read a sampling of the story every week. While spoilers are welcome, we ask to refrain from spoiling issues AHEAD of what is currently being discussed. Though if you have to spill the beans on something ahead, you can use the “Blur Spoiler” function to do so.

Discussion Questions can be found HERE!

PART THREE: “Before the Flood”

This one is going to be a little different, and something I like to call “Crossover Potpourri.”

Zero Year wasn’t just a big story within the pages of Batman. Many books around this time, both within the Batman line and beyond, published one-shot tie-ins to the event, mostly dealing with the oncoming super storm that was about to hit Gotham City.

With this week, instead of assigning you readers all twelve of these issues, we’re going to let you decide. Pick the books from the list that interest you, as little or as many as you wish, and let us know what you think!

Discussion Questions can be found HERE.

Discussion Questions can be found HERE!

Looking forward to reading this with you guys!

I’m quite fond of “Secret City.” I like Snyder’s re-envisioning of the Red Hood gang and the “always a bad guy” take on Joker. I favor this origin over the “poor sap with bad luck” take from The Killing Joke. Snyder also does a better job at incorporating ideas from classic Batman stories than Frank Miller did in Year One. See especially the re-introduction of Philip Wayne, a character who was needlessly dropped in the post-Crisis era.

That said, the holographic reimagining of the iconic “I shall become a bat” scene is even goofier than Miller’s “I’ll just bleed to death here unless my dead dad drops me a hint” scene. And this needlessly over-the-top tendency will ultimately be the downfall of Zero Year. But I’ll give credit where credit is due; the story starts off as a worthy rival to the excessively grounded Year One before it turns absurd and irritating in the following two parts.

I agree about the take on the Red Hood gang – it feels like a good enemy for Bruce while he’s basically being an anonymous vigilante.

It’s the first I’ve heard of Phillip being a character from the past, but I definitely agree Snyder’s good at incorporating elements of the past. He did it previously with Owlman/Thomas Wayne Jr. in Court of Owls, and around the same time as this story he and the group of writers around him would revamp Julia Pennyworth in a really awesome way for Batman Eternal.

He was a rather obscure character. He was Bruce’s legal guardian, but he never assumed the role of a father figure. Instead, Bruce was raised by Philip’s housekeeper, who just happened to be Joe Chill’s mother. The story with his original appearance isn’t on here, but you can see a summary of the story in The Untold Legend of the Batman.

Huh, I have read that but don’t remember that part.

Here’s his appearance in Untold Legend #1: 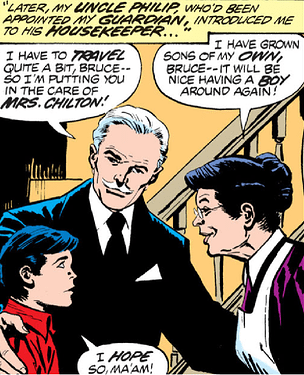 And here’s an appearance in Secret Origins #6: 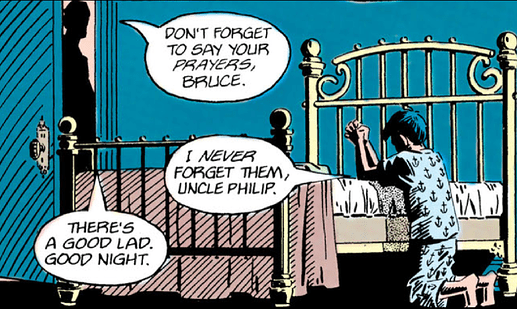 It’s also worth noting that Wayne Manor was originally a mansion that Bruce purchased as an adult, not an ancestral home…

Interesting! Needless to say I think most of us prefer the ancestral home with Alfred as Bruce’s surrogate parent.

Yes, most of you.

First off, a few reactions:

They haven’t really grabbed my full interest just yet. At the moment, they’re criminals in masks to me. I’m hoping we’ll get to know more about them as the story progresses. I think it was ironic that Bruce seemed frustrated that they wear masks and could be anyone (stares into camera like on The Office).

My favorite was the driving lesson. The end - where he turned the guy in to the police - was a surprise.

Hmmm… I’m not sure on this one.

Those were definitely great moments – and you’ll see more of those in the crossover section for pretty much all of those characters but Tim.

Speaking of, this might make some classic fans mad, but stuff like this is why I kind of prefer the New 52/Rebirth Tim to the classic. He actually has a hook now and not the Lando Tucker of Robins!

I literally said, “ouch” at this moment. Alfred is cutting deep.

Alfred does a lot of knocking some sense into Bruce in these issues – sometimes literally! 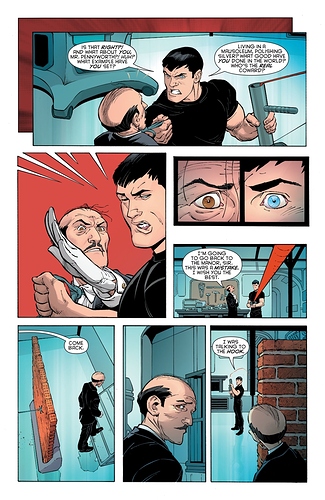 “Edward Nygma. I’m your uncle’s advisor.” I stopped in my tracks at this line.

That was a great scene, showing these two adversaries meeting before they fully become themselves. I really loved the “ouroborus” page in particular, because it’s just so unique. 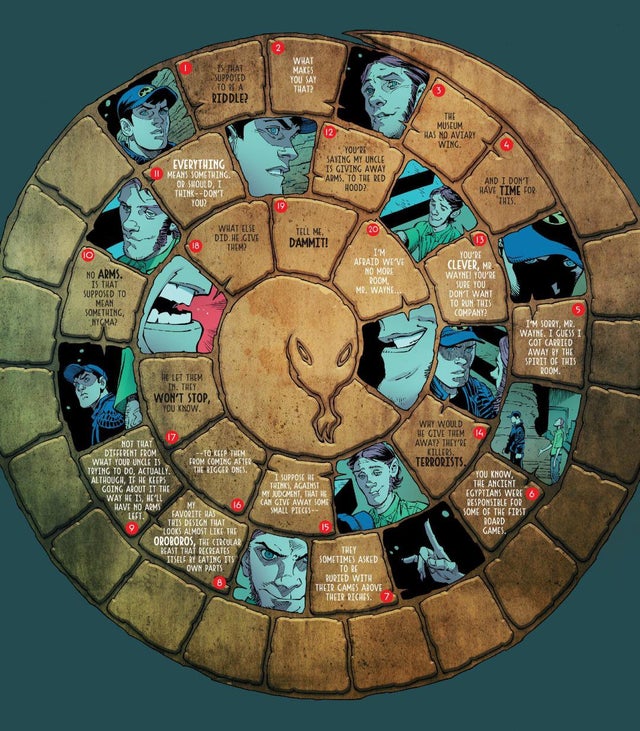 They haven’t really grabbed my full interest just yet. At the moment, they’re criminals in masks to me. I’m hoping we’ll get to know more about them as the story progresses. I think it was ironic that Bruce seemed frustrated that they wear masks and could be anyone ( stares into camera like on The Office ).

I get the feeling you will just a little bit within the next issue or so.

I’m with you, the driving lesson is definitely my favorite, love the whole “thrill them so much they want you to escape” idea, which absolutely sounds like Bruce’s driving style much of the time.

Thanks for reading along, @JLWWSM, glad you’re enjoying it.

Alfred does a lot of knocking some sense into Bruce

Since it’s already a reference to an existing meme, perhaps it hasn’t caught on due to potential redundancy. 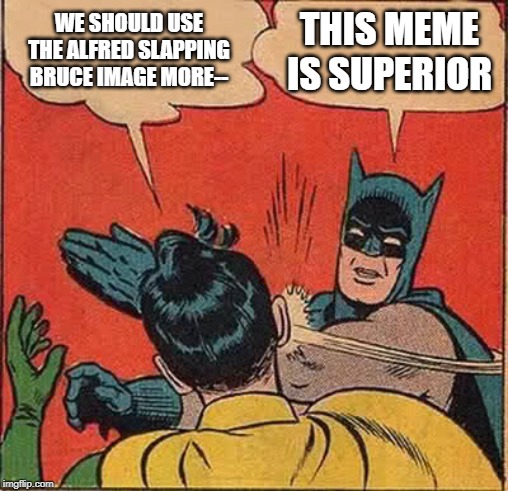 I think they’re a fitting enemy for Bruce at this time in his life. After all, if we have a vigilante who using his cunning and technology can look like anyone, who better of a foe than a group who could be anybody? It also kind of gives some more extra narrative weight to the whole “escalation” thing that Batman Begins and The Dark Knight showed (or, according to one @AlexanderKnox, told explicitly). If you have these kinds of enemies when you’re being anonymous, what happens when you give yourself a persona?

Like I said with @JLWWSM, my favorite was definitely “Where Did You Learn How to Drive?!” Not only because of the story elements in it, but because it’s rare to see good car chases in comics, and this one works especially well.

Though I do want to give an extra shout-out to the one where Bruce is trapped under the sphinx. Really shows the origins of Bruce’s ingenuity.

It’s funny, I thought this question would yield more discussion, because it kind of…if not questions than at least makes you think a little bit about the tragedy of what Arkham, or a place of mental healing turns into. You have to imagine that there are more than just the rogues gallery residing in that Asylum. Regular people who suffer through great loss or trauma, or just were born with slightly skewed brain chemistry, more harm to themselves than others.

As for the question, we see people seemingly leave after being healed for a while – we’ve seen a few stories like that with Harley Quinn in both comics and cartoons. I just wish we saw more of that within these stories, I guess.

Though I do want to give an extra shout-out to the one where Bruce is trapped under the sphinx. Really shows the origins of Bruce’s ingenuity.

Same, that was my second choice. It was good.

, I thought this question would yield more discussion,

I actually keep thinking about this one. I asked myself, if I had a loved one who needed help, would I send them to Arkham? My answer is a resounding, No! I’d send them to Metropolis or pretty much anywhere else.

(You might be wondering – why am I posting them a week at a time? Well, did you know that there’s a 7,000 character limit on a post? I didn’t, until I made this thread.

Super crappy response! I like this story a lot a lot! If I remember right my favorite end stories were him stuck in the cave and the one where he is fighting in some Scandinavian country i think. On to week 2!

Hey, there are no crappy responses! …Well, within reason.

And yeah, the one of him in the massive pit fight was pretty good too. Really shows Bruce’s drive.