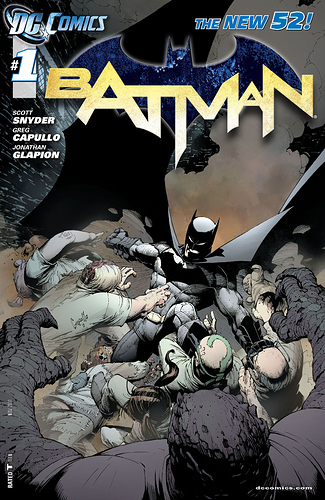 Howdy y’all and welcome to another installment from the World of Bats. These next 2 weeks we’ll join Batman as he takes a crack at his first unsolved case.
"They see you at your hearth
and they see you in your bed
speak not a whispered word about them
or they’ll send the Talon for your head."
The Court of Owls!

This was Snyder’s first story arc for the New 52 Batman run. There are mixed feelings about the New 52 overall but most will agree that Snyder’s run was probably the best thing to come out of the New 52, JL being a close second for me personally.

Here’s a link to this weeks read Court of Owls

If you wish to join the World of Bats and see some of the previous club entries, you can check out the link to our club HERE . If you have any questions about the club, feel free to contact @JeepersItsTheJamags, @Jay_Kay, and/or myself @AquamonC137

Apologies for the late post y’all.
As always happy reading and have a great week BatFam!

I have never read this, and have always wanted to read it! I am putting this on my calendar to make sure I can read along by the end Feb. 16th!

Looking forward to rereading these.

I’ve heard great things about this story and I’m procrastinating from things I have to do today, so I’m actually already done.

OK, so a couple things:

There are some really cool horror elements here, but the implementation is disappointing and implausible even by comic book logic. I like that it’s kind of a detective story, but it doesn’t handle the detecting very well.

In fact, I might’ve even preferred it if the Court were a new initiative capitalizing on the nursery rhyme (maybe even rebuilding from resources left over by an older, now-defunct organization). It would’ve made a nice twist and explained why Batman didn’t find them before (namely, they didn’t exist yet).

The whole thing is also kind of generally disappointing because it has a very similar tone and style to The Black Mirror, which I really liked.

While I do like this story, I will say that I think it would have been more effective if they were introduced in more of a slow burn throughout Snyder’s arc. Like we first hear the nursery rhyme and are told about them in the first arc, then a villain is being manipulated by some unseen group that Batman can’t figure out, and so on until they’re finally revealed.

But, considering that this is considered one of the modern classic Batman stories, and the Court has been used in many forms of outside media, I guess it worked out well enough as is. Who am I to say?

Also, I remember when this was going on that Snyder had to go onto Twitter and such multiple times to say “no, the book you picked up isn’t a misprint.”

I remember being a little annoyed with those upside down pages as well when it first came out. Yeah I guess there are some plot points that make it hard to believe that the court has been operating this whole time. I didn’t look at it with as much skepticism myself but see your point. I bought into it I guess. I haven’t gone back and read this since it came out but will be this week. Maybe I’ll find a better reason for why I felt the court could have been around without Batmans knowledge other than I just bought it. I was thinking of doing The Black Mirror first and now I perhaps wish I had. Also thought of maybe doing Morrison’s story that introduces Damien before this one as well.

I can see the introduction and resolution of the court being sprinkled throughout the run working. I’m glad we got it in one arc though (I’m impatient).

Okay, I hate this story and think that it exhibits everything wrong with the New 52, but I’ll hold off that rant for later.

Also thought of maybe doing Morrison’s story that introduces Damien before this one as well.

Considering that my revamped club is just about to do that story, you’re lucky you didn’t. Otherwise, we’d be sending the zombie owl soldiers after you.

Okay, I hate this story

Don’t you say that! You Know you love it and the New 52!
Like the new flair good sir.

I actually have the trade paperback of this story but I lost, but it’s somewhere in my house

I just had another thought of how they could have rewritten this and not changed the plot much. Just don’t have Batman be skeptical. Have his earlier investigations be inconclusive rather than dead ends. But now even though there’s real proof of the Court because his actions as Bruce Wayne forced them out of hiding, no one else believes him, so he has to take them on alone. That would smooth things out considerably. It would even help with my second point by showing that taking action is risky for the Court.

that would certainly work. I haven’t read this since it came out. will reread this week just crazy busy but I think you could make the case that because he deals with a different class of criminals it could have gone under his radar. I feel that unless they did something that effected Wayne industries he probably would not be looking into corporate corruption. Also the Wayne’s were never a fan of the court so it would make sense to keep things hush hush around Wayne Enterprise.

My problem with the story in a nutshell: 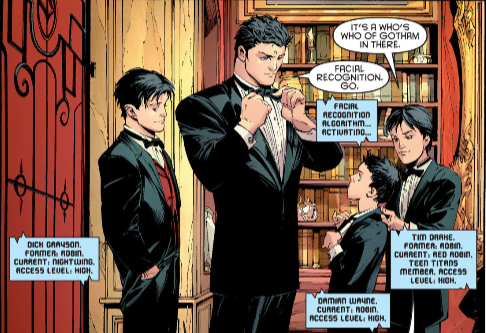 If you told me that Bruce was unaware of a secret society in Gotham during his sixth year as Batman, I’d be like, “Okay, that’s reasonable. That would still be around the Golden/Silver Age part of his history. He hadn’t even met Ra’s Al Ghul yet.” But when you try to tell me that by this point in his career, he is already four Robins in and has gone through the events of Morrison’s pre-Flashpoint run–nope. The Batman of RIP would know.

I think just Bruce’s general arrogance and @AquamonC137’s aforementioned “keeping things hush-hush around the Waynes” is enough explanation for why he believes they don’t exist, but I get what you mean.

Posting that pic does remind me of a thought that I had read that first issue, and that while I think Capullo’s take on the characters was liked from the start, he definitely starts off a bit rougher than what he eventually does by the end. I think in these first few issues he’s kind of shaking off the McFarlane influence, and a complaint that Capullo took to heart was the same-face syndrome of all the Robins.

That said, I am bummed that you took out one of the better parts of that page, which is Damian roasting Tim, one of my favorite things.

My problem with modern Batman in general in a nutshell:

So I read this (also first time participating in a club reading/discussion!) and I’m conflicted. I love the art style, and the plot is interesting! However, as previous people have mentioned, I wish the Owls were drawn out in Synder’s run more instead of first thing. Feels a tad rush to me. I also would’ve loved to see more of Batman trapped underground and his descent to madness instead of “Oh hey he’s suddenly crazy.” Other than that, I enjoyed it. Look forward to reading more with you all!

I think just Bruce’s general arrogance and @AquamonC137’s aforementioned “keeping things hush-hush around the Waynes” is enough explanation for why he believes they don’t exist, but I get what you mean.

He had literally just gone through this with the Black Glove (right down to the long-lost Wayne relative!), but the Black Glove was described in a more plausible way. They were only semi-active as an organization, whereas the Court of Owls appears to be quite active.

Some thoughts/pages that I liked in the first issue: 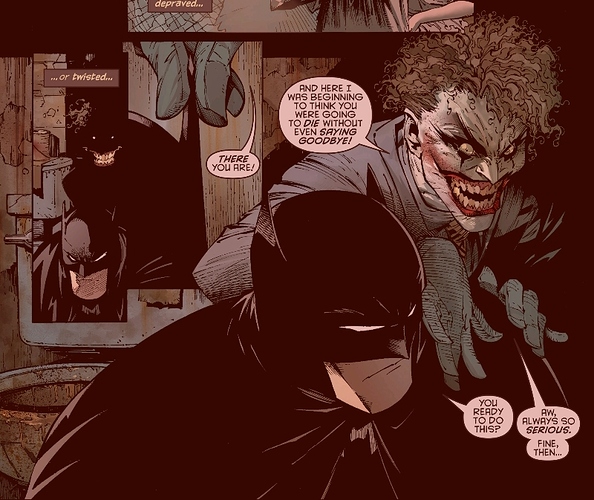 Its interesting that the first issue starts with Batman teaming up with “The Joker,” considering where Snyder would take the book later and his “finale” in Last Knight on Earth. 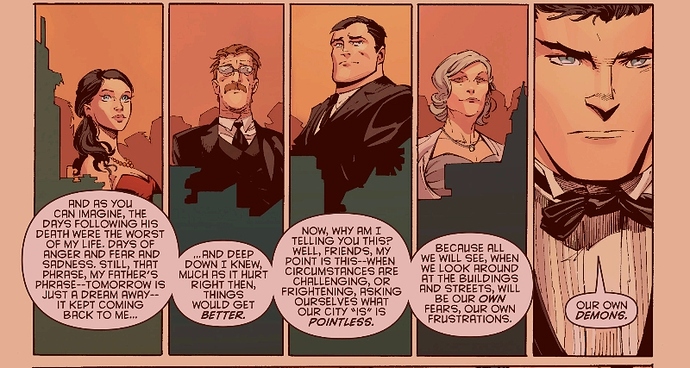 First appearance of Harper Row! All these characters will be important to this run in some way…

Fun fact, the character of Harper was originally going to be Cassandra Cain, but editorial wanted to keep things simple: only one “Batgirl.” Snyder wouldn’t get his chance to bring her back until Batman & Robin Eternal. 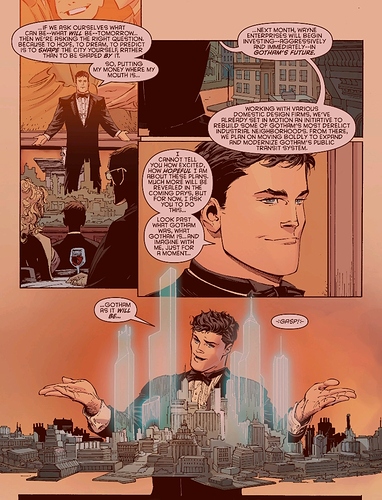 What’s cool is that this is addressed in the other books at the time, specifically Batgirl, where Barbara’s new activist roommate is protesting it, calling it prettied-up gentrification. 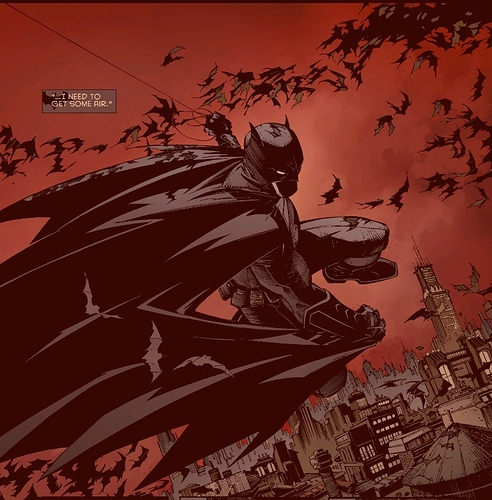 This is just a wicked cool piece of art.