“Whew! I didn’t think I’d be able to finish all those great comics on DCUI in June, but I’ve done it! Now to relax and catch up on some housework. But first, I think I’ll check the DC Community!”

Clicks to the best place on the Internet, sees announcement for the enormous amount of amazing titles coming in July 2021.

Just when you thought it was safe to go in the housework…DC UNIVERSE INFINITE is staying true to its word and bringing you an infinite amount of comics, including:

Not to mention the very final issue of the BATMAN/FORTNITE: ZERO POINT saga, which will earn you a rare unlockable

But don’t take our word for it- read on to see each and every morsel of comic-y goodness in July!

Tell us- what are you most excited to read? What else are you hoping to see in the future (state)? Tell all in the comments below!

Glad to see that some already-digitized-but-previously-available-only-in-a-collection issues of Aquaman: Sword of Atlantis will be coming, and that Who’s Who will indeed be continuing with the 1988 series.

(And I hope that the issue that’s holding up Wasteland #6, whatever it may be, is resolved soon.)

A whole batch of RWBY/JUSTICE LEAGUE !

Oh wow! Been a minute since we saw this series start digitizing! Maybe we’re getting more focus on Aquaman’s archive in preparation for the movie sequel.

|Batman: Curse of the White Knight|

Hey! Been a while since we’ve seen a White Knight issue here!

can’t wait to read future State. And the conclusion to Death Metal (the whole thing in general still have to read that

. Just got into that show and really enjoying it.
I think they had a comic series before made by DC right? Is that on here? I should check.

In July we are missing the last god, it seems. Oh, well, there’s enough meat there to last out the month. I was kind of expecting us to get at least some American vampire after we got the original run of sweet tooth to read now that the return is here, but I guess that was just for the netflix release…

Thanks for the great work, though, guys. I appreciate all these comics I’m getting.

I read most of the FUTURE STATE titles as they were dropping, but exited to re-read some of them like SUPERMAN: WORLDS OF WAR and FS: WONDER WOMAN starring Yara Flor.

I also want to check out the JINNY HEX SPECIAL and ICON & ROCKET: SEASON ONE 1

Looking forward to seeing more old comics like Batman, get to see more issues of the classic series.I can’t wait for more Joker puzzle mystery and I’m curious, what’s a RWBY/Justice League? Another Crossover? Can’t wait to see!
There’s so many books to mention but can’t get to them all, can’t wait for July!

JOKER’S PUZZLEBOX was surprisingly fun. Excited to read the next one!

Yessss! Loved Static #1 and can’t wait for this and Hardware, and hopefully more titles to be announced before this first wave wraps up.

Is there a reading order for FUTURE STATE anywhere? Anything beyond DC NATION PRESENTS DC: FUTURE STATE #1 recommended before diving in to all these #1s?

I am skimming for Hawkman, Hawkman, and Hawkman.

We have a support group here on DC Community if you’re feeling a little overwhelmed by all these new DC Universe Infinite titles in July, and would just like to have a steady guiding lighthouse to help you weekly navigate through this overwhelming amount of entertainment, as well as to have a free place to discuss the stories in a safe place.

RWBY/ Justice League is a crossover with an animated series that I think is on the Roosterteeth web site. I haven’t watched it, but I get a kind of Sailor Moon meets fantasy war vibe, I hear good things about it.

Is there a reading order for FUTURE STATE anywhere? Anything beyond DC NATION PRESENTS DC: FUTURE STATE #1 recommended before diving in to all these #1s?

Heya keath! We do have a Future State reading order suggestion here by none other than Nathan.Payson:

The current era of DC comics is coming to a close which begs the question, what’s next? What does the future look like, and what order should I read it in? Well, we are still figuring some stuff out, but here’s the current reading order. This reading order is for people who know NOTHING about DC Comics and those who know everything alike (so when you see simple explanations, it’s for new readers who want to get into DC Comics but don’t know who anyone is) (If you want to read the Google Doc Ver…

Tuesday is a HUGE day for DC Comics. Rebirth comes to an end and Future State begins. On top of that, Generations begins with plans to bridge the gap, so there’s a lot going on. I recommend reading next weeks comics in the following order: End of Rebirth: Death Metal #7 Bridging the gap: Generations: Shattered #1 Read the rest of the sections in any order Setting up Gotham: (Batman should be first because it will set up Gotham’s status quo) Future State: The Next Batman #1 Future State:…

You can also see a brief discussion here that notes because of the varying timelines (for example, TurokSoneofStone1950 notes Swamp Thing is way in the future), a dedicated reading order before diving in isn’t fully necessary.

Let’s face it, she scream alot!

Looking forward to those, Aquaman: Sword of Atlantas was an interesting little series. Not sure I will read it again, but glad some who likely missed it will get a chance. And glad to be able to check out the Future state series I missed

Also looking forward to the final issue of Batman/Fortnight. Which has been a surpringly enjoyable read. 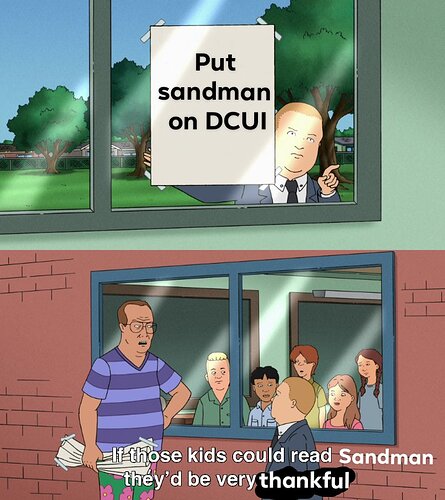 Haha thank you for the request. I love looking at these. Very creative way of putting your request in! Hopefully your wish will be answered!