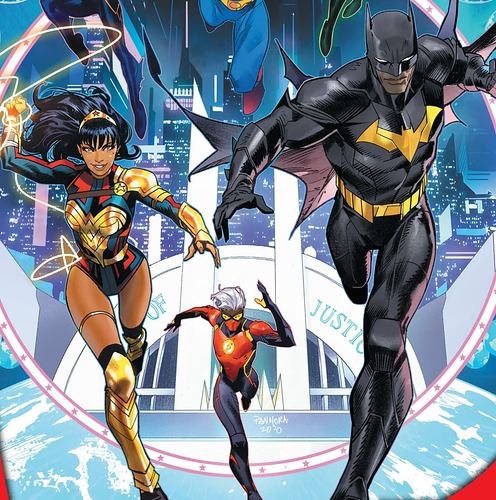 Someone had a great idea (spoiler: it was @SteveTrevor2.0 - thanks!). Instead of attempting to keep a formal wiki log, how about we just have an ongoing thread for the year where everyone can share their runs (and rides and swims, etc) as they see fit? If you want to keep a chart in your first post, cool. If you want to just post “I ran 5 miles today and it was awesome!”, that works too. Let’s keep it conversational, and keep things moving as we head in to what will hopefully be a great year.

Thanks @keath . I’m having a great year for running and I need to tell someone about it!

I’ve run 107 miles for January. For the past almost two years I was limiting myself to three runs per week. This year I am upping it to four. So far, so good. Two 5 milers during the week, and then two longer ones on the weekend. Actually, I’ve been taking it easy on the long runs. A couple of 12 milers, but the rest were only 8 or so. Don’t want to overdo it.

My running BFF is injured so I’ve only run with her once this month.

I can’t tell her I am having a great training month because that would just be mean. I sure didn’t want to hear about her training during my back surgery all those years ago.

The conditions on the trails have either been mostly sheer ice or around a foot of snow this past weekend. Been running almost exclusively with screw shoes. I took my snowshoes out this past Saturday and Sunday. My brother came with me on Sunday and did his longest snowshoe ever- 4 miles. Good times.

Anyway, I just got my covid booster and I am too messed up to run, but I’ll be out this weekend. Supposed to get more snow tomorrow, so it’s going to be interesting.

Early January before the big snow storm. Love how Fat Tire bikes groom the trails. How did we ever run in the winter before? 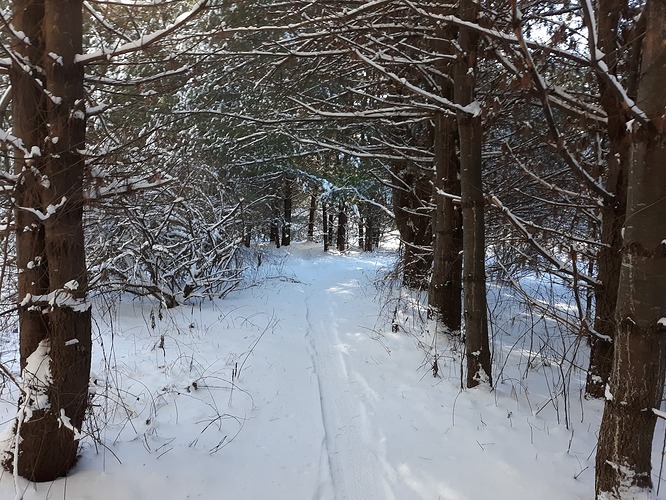 Anyway, I just had to share that. Hope you all are having a great winter too!

I’ve been holding at around 20 miles per week. Had my most spectacular fall ever this Sunday. I’ve been running just fine on screw shoes in the snow and ice (Fat tire bikes make for a nice running path), but there are times that they are not enough, particularly when there is a solid layer of ice with less than an inch of snowfall on top of it.

Running on flat ice = no problem.

Running on flat ice and then having an incline or decline = a little sketchy, but doable.

Running on a switchback at an angle and then hitting a steep decline = slipping down the decline, angling towards the side of the trail, and then falling off the cliff.

I use the word “cliff” for added drama, but I took a serious tumble and starting rolling down the hill until I hit a fallen tree and stopped. Didn’t really hurt, got up and checked out my new scars on my right arm and leg, and finished up the run (well, took a short cut and finished 7.5 miles instead of 8). I was really relieved no one saw my fall. That is the most important thing, after all.

Felt a bit stiff and sore this morning, but work was fine. Went to do some calisthenics this evening and in the pushup position realized I was a bit more bruised than I thought. Supposed to be some warm days so hopefully some of the ice melts.

Hope everyone else is getting in some good training, or at least resting up and waiting for spring training.

Passed 200 miles for the year. My best year ever.

It is really nice to be running without snow and ice. The screw shoes have been set aside (hopefully for the year).

Anyone else getting out there for Spring?

Ok, it’s been a bit since I have posted in here. Sorry everyone! But I finally got back to the gym this week. I got two exercise bike rides in, one for 5.5 miles and another for 6. I plan to go again on Friday.

It isn’t a lot but it is more than I have been doing lately.

I hope to keep it up as long as my schedule allows me to.

I’ve been pretty non-participatory as well. Just eyeing @SteveTrevor2.0’s updates and looking out the window wistfully. After a mellow January to focus on stretching, in February I shifted to walking regularly (at least 4x per week) to get back to a habit before getting frustrated by lack of running fitness. This month I added beginner weight workouts (2x per week) so I don’t melt away in to scrawny old man. I’m hoping to start some running miles up come April, so I can lock in a proper 5k for the Superhero Run. (Still virtual for me, since there’s no Six Flags within 1000 miles.) What I really need to do is tune my bike up so I can follow @Row.Harper’s example and get some non-impact miles in. (My wife is terrified of the horrible drivers around here, so I need to drive the bike to a trail. But I’m not driving anything anywhere if the bike is hanging from the ceiling with flat tires.)

Injured. Bleah. Achilles tendon, which is a new one for me. Ah, well. Not my first injury and probably not my last.

There is a certain irony that trying to stay healthy can lead to injury and make you more inactive than those who don’t exercise. Wish I could borrow their uninjured parts. They aren’t using them anyway!

Achilles tendon, which is a new one for me.

Oh noes! Do you know if it is torn or just tendinitis? Wishing you a speedy recovery, but I’m sure you know to be patient with it so you don’t slow the healing.

Borrowing inactive people parts would be the best. You could even trade things out. Like, oh I have this big project that involves a lot of heavy lifting, maybe I can rent some biceps from a weightlifter on a beach vacation. Like CraigsList for limbs and joints and such.

X-ray came out normal, so it looks like tendonitis. Doctor says I need to rest, but it seems like the cure is worse than the disease!

cure is worse than the disease!

Okay, I’m back! Just went out for a five miler. Walked three miles, ran about 1.9 miles and walked in the rest. Feels pretty good. I’ll slowly ramp up mileage but right now I’m just glad to be back in the game!