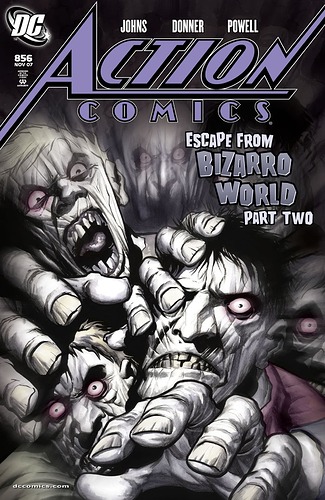 Happy Friday, @ModernAgeSupermanClub! I hope you’re all well and ready for a boffo bizarre adventure written by Superman: The Movie director Richard Donner and comics extraordinaire Geoff Johns, with pencils by Eric Powell, of The Goon fame!

Also: In recognition of Richard Donner, a watch-along of his two Superman films will be held this Saturday, October 9th, starting at 12 PM Pacific Time/3 PM Eastern Time. You can read all about it right here. I hope to see you there!

That’s our adventure for this week! A short, but sweet, three-parter that concludes Richard Donner’s run on Action Comics in a bizarrely grand fashion, while also paving the way for other monstrously fun reads to come in the weeks ahead, as Halloween dawns ever closer.

Enjoy and as always, have fun,

I had thought that Richard Donner writing on Action Comics is a real gem. I enjoyed the first story and loved his entire run. He will be missed and thanks to him that we have Superhero and comic themed films.

Likewise. For the hero who started it all, Superman, and in the series that started it all, Action Comics, to be written by the man who best brought Superman to cinematic life and also gave life to serious live-action comic book-based movies, Donner’s whole run on Action was great, from start to finish.

If you’d like to pay tribute to Mr. Donner’s work with Superman on film, do please check out the watch-along linked in the OP. All are welcome.

If I haven’t seen the cover I wouldn’t have believed it! That is so cool!

Definitely different than Last Son, but in all the best ways. This arc also gives one an idea of what Donner would have done with Bizarro in a movie.

I think the first time that Richard Donner & Geoff Johns work together was the movie ‘Conspiracy Theory’ If anybody never saw it, I highly recommended it, it’s a good movie. While the movie is ‘R’ It’s mostly a PG-13 film, it was R rated due to a violent scene at the end.

The Flash is pretty funny though. I love this little three-part arc; such a good fit for the Halloween season and the art-style is great.

I have to say, your avatar inspired this week’s reading.

I was going to go with something else at first, but then I saw your art, remembered EFBW and thought “Hello, Megan! You’ve got a Donner WAL, so why not do the rest of his run on Action Comics?”.

For that, I thank you, hero of Thanagar.

Oh, yeah, speaking of Thanagar, keep an eye on the JLBC in November. One week in particular will have (as they say in the Red Bull ads) “Wiiiings!”.

The Flash is pretty funny though.

Indeed. When he says “I’m tired.” and just flops down, I laughed, both when this story originally came out, and in my recent re-read.

Hmm…I think I’ll go with Last Son, because while I like the idea of Bizarro in theory, actually reading him can be more frustrating than fun for me. Meanwhile, I appreciated how they combined stuff from the movie and the comics and did more character work with these characters. That said, Bizarro World does have some good moments, specifically the flashbacks with Clark and Jonathan Kent, and seeing him punch out Doomsday was oddly satisfying.

Also, if I’m perfectly honest, I think I prefer more of the work that Geoff Johns did by himself on Action Comics than the stuff he did with Donner, especially arcs like Superman & The Legion of Superheroes, Up Up & Away, and Brainiac.

The fat Flash falling down was pretty funny, but that’s about all he did. The gag of Bizarro Wonder Woman having to tie herself up for others to lie could have been fun but not really realized. Bizarro Batman got especially funny when Bizarro used his vision to get Robin out of him, and Doomsday killed Robin. I was kind of hoping for a running gag where Batman keeps “giving birth” to Robin only for Robin to keep dying, could have been a funny metacommentary on all the times we’ve seen dead Robins.

I think Powell is more specifically a good fit for Bizarro than with Superman. I’m a little unsure regarding how I feel about Powell. I can see he’s definitely a solid artist, but I never was a fan of The Goon – he felt like a bland Rockabilly Hellboy clone topped with lame “so offensive it’s funny” jokes that even Family Guy would find lame.

I think what soured me most about Powell though was some of his personal behavior. I try to separate the art from the artist, but I can’t help but remember the time that he created a long, drawn out video on YouTube about the virtues of creator-owned comics that featured an extended bit of comparing working at Marvel or DC to being sodomized. Like, I agree that superheroes shouldn’t be the only game in town for comics, but it was a video that made me want to buy more superhero comics just to spite him. Sadly(?) the video was taken down, but here’s a decent article about it from that time: 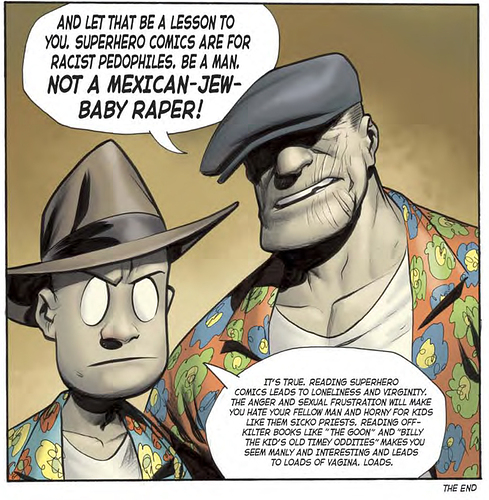 I mean, it’s hard to top anything after mentioning Powell’s well-intentioned-but-MASSIVELY-tone-deaf rant, but yeah, outside of all that malarkey, this was a fun enough little story. It was just as long as it needed to be, it had a couple of laughs, it did what it set out to do.

Thanks, I will check it out.

Good ol’ Escape from Bizarro World! Here are my thoughts:

Likewise. That was great when it came out, and remains so, to this day. Escape from Bizzarro World is good too, but Last Son was the highpoint of the Johns and Donner run on Action.

I was kind of hoping for a running gag where Batman keeps “giving birth” to Robin only for Robin to keep dying, could have been a funny metacommentary on all the times we’ve seen dead Robins.

That would have been good! I wonder if it was ever discussed. It seems like a perfect thing to apply to Bizarro Batman. Maybe editorial thought “Batman doesn’t do that?”

As for Powell, I remember that rant of his from when he published it. Whenever creators have

on comics/brands I like, I tend to buy more to spite them.

Granted, comics should be and are so much more than just superheroes (although, that genre in and of itself has encapsulated every genre of storytelling known to man, so any writer who finds it limiting makes me question their imagination), but when folks just ramble and ramble about how “bad” superhero books are, I think “Uh-huh.” as I flip through the latest blockbuster event mini from DC.

this was a fun enough little story. It was just as long as it needed to be, it had a couple of laughs, it did what it set out to do.

Agreed. It didn’t set out to reinvent Superman, or do anything drastic, it was just fun. When people say “Modern comics aren’t fun, anymore.” I think of this story and say to myself “Actually, they are. You just need to find the right stuff.”

Thanks for stoppin’ by, Jay_Kay!

I really, really like this story arc, but I definitely prefer Last Son. I’m a sucker for Zod, and the emotions of Clark and Lois’ journey with Chris are just fantastic.

I dig the look of Bizarro Aquaman, but I’m going to have to go with Bizarro Flash. Such a great gag.

Right? Having “The Fastest Man Alive!” become anything but was a nifty twist on 'ol Flasher (as Captain Boomerang calls him).

I think the blue sun idea is brilliant. Pa Kent is absolutely a hero. And the flashback scenes with Pa and young Clark hit me in the feels every time. Thanks, Donner and Johns.

Agreed. Pa is a super man in his own right, and every bit as capable as his adopted Kryptonian son is, just in different ways, especially with matters of family and of the heart.

Thanks for flying in! I hope to see you around the club more!

Thanks for flying in! I hope to see you around the club more!

I’ll definitely try to pop in again. I sometimes get so into whatever I’m reading at the moment that I don’t think about participating in a group like this. I appreciated that this week’s reading wasn’t too long. Thanks for setting it up!

I sometimes get so into whatever I’m reading at the moment that I don’t think about participating in a group like this.

You’re always welcome to take your time with whatever you’re reading, and reply whenever you can. For my clubs, I don’t stress time periods on when folks can reply. I just put the content out there, and they can read/reply whenever they’ve the time.

I appreciated that this week’s reading wasn’t too long.

Then you will likely love Week 9, as its another three-parter. This time, the story will be from Superman v1.

Thanks for setting it up!