) in the world of The Last Son of Krypton!

From comics to movies, TV and more, if you’re looking for THE spot on DC Universe Infinite to chat about DC’s best and brightest as he and his supporting cast wage their never-ending battle for truth, justice and the American way in the modern landscape, then take flight and join in on the fun right

The MASC Book Shelf!
Click the year below for all our past readings and a link to each thread!
It’s never too late to join the discussion!

Feel free to contact myself and/or @Bar-El with questions, comments and/or any other Superman-related things you’d like to see highlighted in our club!

The adventures begin as you take flight into Week 1!

@Alec.Holland can you look into this, please?

Unless I’m missing something, all links are working on my end.

You were supposed to nudge me when it was ready so I could open it!

Watchalongs aren’t my thing, but I will be happy to join in on the reading.

Three fan clubs to run, you really are a Superman @Vroom!

Three fan clubs to run, you really are a Superman @Vroom!

is fueling his car, then looks back

“Superman”, you say? 'Fraid not, friend. I’m just a humble feller who looks good in a tuxedo (so I’m told).

All the same, thanks, @Reaganfan78!

@Vroom I hear if you slip the mods 50 comics they’ll actually put your new club on the Club Listing. 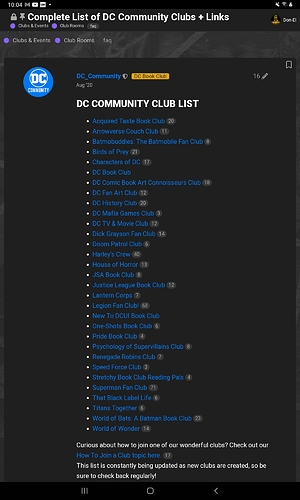 @moderators Is this true? Because, if it is…

@Alec.Holland and The Mod Squad have been very busy as of late, so I’m cool if it takes them a few days to get the new joint properly listed.

It has been done

It has been done

What? As was said by Bloat in Finding Nemo, “Can’t hear ya, Pidge!”

You know, Bloat was voiced by Brad Garrett, who also played Lobo and Bibbo in Superman: The Animated Series, along with being Ray’s brother on Everybody Loves Raymond, which featured DC elements in the episodes where Ray went to Chris Elliott’s character’s comic store.

I’ll just…go…lock myself in my locker…

'Tis an honor to be on The List, once more.

“Now, this looks like a job for me, so everybody else just let me be!”

@CaptainYesterday It is indeed a bad outfit, Jim! “Whoa!”

The Week 2 Watch-Along is ready for any and all to take flight into!

If you missed our Week 1 Watch-Along, you can check it out here.

It’s September 2021, so let’s go back to the then-future of the DC Universe in September of 2011 via Week 3, as we celebrate Superman’s debut during The New 52.

On the Watch-Along side of things, we’ll be checking this out.