This past July, famed, highly influential and beloved filmmaker Richard Donner passed away.

While his gifts to the world of movies were many, it is his contributions to the live-action DC lexicon through 1978’s Superman: The Movie (and decades later, 2006’s Superman II: The Richard Donner Cut) that not only made him a household name for many, but also, and indisputably, got Hollywood to take comic book-based movies and their characters seriously.

What Richard Donner and his team accomplished with Superman: The Movie is a lasting, impactful legacy that endures to this very day in Hollywood, and in the hearts and minds of fans the world over, as well.

To honor the man who made us believe that a man could fly, myself and @Bar-El, in conjuntion with both the @ModernAgeSupermanClub and the @SmallvilleFanClub, will be co-hosting this watch-along, featuring the most influential comic-based movie of all time, Superman: The Movie, and its first sequel, Superman II, as originally envisioned by its original director.

Grab your cape and read on for how this

Note: There are three different editions of Superman: The Movie: the theatrical edition from 1978, the three-hour long TV cut and the extended edition from 2001.

For this event, we will be watching the theatrical edition, which has a runtime of 2 hours and 23 minutes.

When and where the adventure begins: Saturday, October 9th, starting at 12 PM Pacific Time/3 PM Eastern Time, and in this thread.

We’ll start with Superman: The Movie. After it ends, we’ll take a 10-15 minute break, so that everyone can stretch, visit Otisburg and get cued up for our next thrilling adventure.

How to watch: Superman: The Movie is available on physical and digital home video formats, while also streaming on HBO Max.

Superman II: The Richard Donner Cut is also available on physical and digital home video formats. However, it is NOT streaming on HBO Max at this time.

Whatever your preferred means of watching, please be ready to push Play and take flight when the clock strikes your respective start time, and as the curtains pull back for the beginning of the greatest comic book-based adventure to grace the silver screen, Superman: The Movie.

Whether you join @Bar-El and I for one movie or both, all we ask is that you have fun while we all honor the man that put comic-based movies on the map. A man whose legacy is still impacting Hollywood today, while also lasting in our hearts and minds for many decades to come:

We’ll see you there, fans! 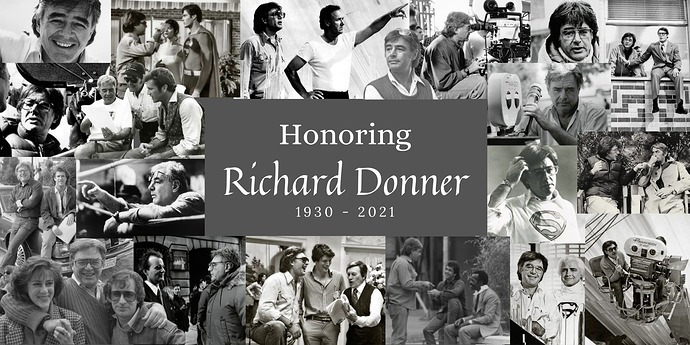 He was a great director, he did a great job making The Goonies, Maverick & Conspiracy Theory. Just because at the time Salkind or whatever their name is, they should’ve sit back and relax and let Donner do his job. He did a fantastic job and it was wrong and foolish to have fired him before finishing Superman 2.

@Jurisdiction If you’re in the mood for Two-Face, there’s a forthcoming watch-along with his name on it! Details to come.

@Spider-Man78 Those are all great movies, along with The Omen and the Lethal Weapon quadrilogy.

Beyond Superman: The Movie, my favorite of Donner’s is The Goonies.

I’m available for this one! This would be an interesting one because while I have watched Superman: The Movie before, I’ve never watched the Richard Donner Cut of Superman II. Just got to figure out the best way to get it.

i bought the Donner Cut like two years ago but haven’t had a chance to watch it yet, so this is the perfect excuse! thanks for the heads-up, @TurokSonOfStone1950!

Thanks for the tips! I was initially looking at Amazon Prime but it seemed like they only had the Lester cut available to rent. Did find it on YouTube, and it was on sale too.

Friendly heads-up: For any curious, we’ll be watching the theatrical cut of Superman: The Movie.

It’s been noted in the OP, but I wanted to notate it here as well.

This cut runs 2 hours and 23 minutes, and is the edition available on HBO Max.

I kind of figured as much – as interesting as it might be, I think watching the 4 hour and change International edition AND the second movie might be a little much.

That’s got me thinking of a future double feature with the three hour TV cut of STM and the theatrical cut of II.

Sure, its not as swell of a fit as what’s on tap for this Saturday, but good times with the 'ol mix and match, anyway!

That kind of a DF would give me an opportunity to finally finish the TV cut, which I’ve had for 4 years now, and am only 1 hour into.

Check out this incredible thread the @DCHistoryClub put together with TONS of info on these movies and Mr. Donner!

There are some pretty fun polls too!

[Screen-Shot-2018-10-02-at-9.15.17-AM-e1538496945445] Superheroes have conquered the movies, selling $3.2 billion dollars’ worth at the U.S. box office in 2019, accounting for nearly 20% of ticket sales. The road to that dominance began on December 15th, 1978 when Superman: The Movie made audiences believe that a man could fly. Although the road to superheroes ruling the screen would be a long one, it begins here with the stirring score of John Williams, the vision of Richard Donner, camera a…

Thanks for the link, @Bar-El!

BTW, this is my first time seeing your new avatar.

Thanks! It’s a weird process getting it to update. I actually updated it quite a few days ago but it only recently updated here. I’m not quite sure I’m doing it right lmao

It should automatically display a new avatar.

The important thing is that it worked, and that you now appear to be on the hunt for the Headless Horseman.

Juuuust under two hours until the fun begins, Donner Party!

I’ll be a little late but I can catch up, I know this like the back of my hand, actually better, spent way more time rewatching this than looking at my hand lmao

I hear you – I’m like that with Batman '89, I can practically recite it.