Just in time for the new year: The DC Book Club has returned! 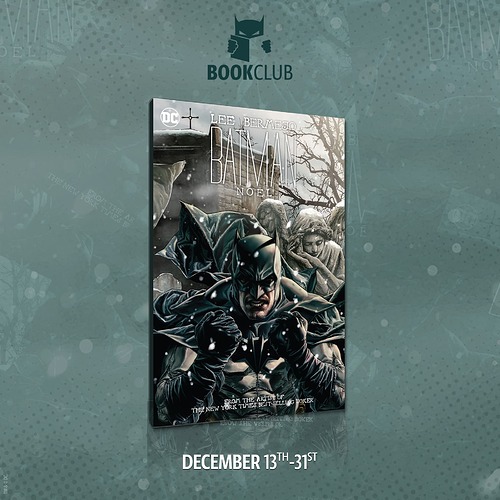 Batman Noël is FREE to read as a registered member all month, so give it a read HERE and join the discussions in this thread all throughout December!

Grab a cup of hot chocolate, throw a few more logs on the fire, and settle in for a snowy adventure through Gotham! With appearances of some of our favorite DC heroes and villains, this wintery read from Lee Bermejo is perfect for the holiday season. Nothing says “Happy Holidays” like The Bats taking on the city’s criminals while a layer of fresh powdery snow covers the streets of Gotham. Strap in! Its going to be a long, cold night…

For this month’s DC Book Club, we’ll be splitting the book into thirds (as listed in DCUI):

Here are some thought starter/discussion questions to kick things off!

Thank you for joining this DC Book Club, and have a wonderful rest of your year! See you in 2022! <3

What would a DC Book Club be without some awesome digital perks? Check out these wonderful Batman Noël wallpapers and bookmarks! 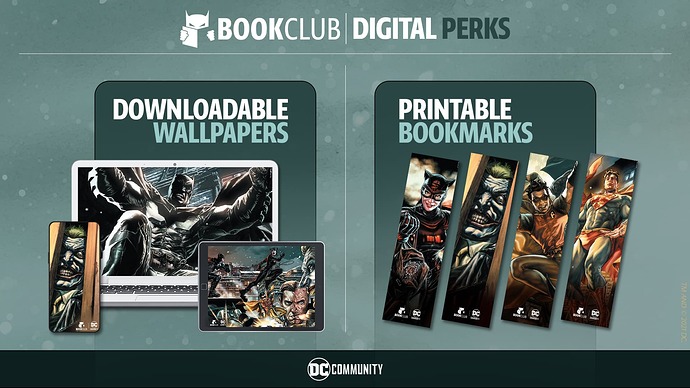 Yay! DC Book Club is back!

Yay! DC Book Club is back!

Woohoo! Can’t wait to get my hands on this and join the discussion in a few days.

Love the Christmas theme, can’t wait to read it!

Oh yes, this is actually a favorite of mine, and one I tend to read every December, so this works out very well.

Batman: Noel is easily my favorite of Lee Bermejo’s works, with or without Azzarello. I recommend it all the time. I love how it recontextualizes Batman as Scrooge, and the way it utilizes the other players in Batman’s life to show him that somewhere along the line, he may have lost his light.

Bookmarked. Amazing to see the club rise from the ashes, this thread would have been just as inspiring no matter what we were going to read, yaaaaaahoo!

I loved Noel in 2011, and am looking forward to a re-read of it, via the High Holy of Book Club Holies that is the DC Book Club.

This just in: Black Adam wanted to welcome back the DCBC:

Although difficult, I managed to stop at page 27.
Now on to the Q&A part of the club.

This is my first time reading Batman: Noel and I thoroughly enjoyed Bermejo’s spin on A Christmas Carol. Batman feels like the perfect character to play the role of scrooge and Gotham is a great backdrop for the story.

I think this really depends on the year and universe. The general vibe I get from the city in Noel is more fearful and desperate than it is hopeful, though there is clearly still hope from the younger population.

I found this ask quite easy, but that may be a personal bias. I think everyone feels like the bad guy at some point in their life, but then has the ability to change and to improve. I don’t think it’s ever fair to deny someone that chance!

He’s definitely just trying to get by in life. I viewed Bob as the epitome of the whole ‘man steals bread to feed his family’ ethical dilemma. He’s definitely not violent, there’s no hint of that within him when confronted by Batman. Most of Gotham’s hardened criminals seem to have no issue pulling a knife or gun out to fight the Bat. Bob is definitely not one of those people.

Fear is almost like a character within itself in Noel. Without fear, there’s no driving force for Bob to be the character that he is and without that, Batman wouldn’t have a reason to improve later on in the comic.

Whilst it’s not something I’d enjoy seeing in every holiday comic from this point onwards, I think it works really well in this particular spin of A Christmas Carol. It feels very appropriate when you view the source material. Scrooge has his own fears of being alone and letting others in, for example.

I love it. The 3rd person narration is really fun, especially as the narrator (and their audience) are both unsure how accurate the tale actually is. It gives me vibes of a father reading ‘The Night Before Christmas’ with their child on their lap and a roaring fire, which is a cozy image and perfect for the holidays!

Just wanted to say a big thank you to @Jitsu for managing to get Batman: Noel added to DC Universe Infinite and for resurrecting the book club. I really appreciate it!

Hello @Jitsu,
This was my first time reading the book, it was so well done, I wanted to keep on reading. Love the arts graphic in the story as well.

Here’s my answers to your questions…

And there you have it, looking forward to reading more and answering more questions.

First off i must say The art was great

1: Hmm… well i would say it can be a bit hopeful in Gotham as there are examples in books like B: TAS the adventure continues where the rogues tend to take the holidays off.

2: I can believe something like this can happen…I have had pneumonia so I know what bats would be going through with it.

3: Well it seems like this was inspired by a certain episode of B:TAS so I feel he is a guy down on his luck and taking the job to try to make his kid’s life a bit better.

4: I read the book in its entirety as I have had a copy for a year and this got me to finally read it. I feel this is a darker future of Batman 66 pre-season 3 mixed with Golden Age Batman as there is no Babs in it and no other Robins. I feel the fear in this is Batman’s fear to live and move on after his ward/son Dick was killed. Thus becoming more jaded from that loss. Yet he finds the will to live again as Bruce Wayne and Batman in the end.

5: I found it interesting however it’s been a long time since I saw the adaptation was done by the muppets of a Christmas Carol (I never actually read the story) however it does work very well with Batman.

PS: The book reminded me of Hinder’s song What Ya Gonna Do.

I like that you pointed out this difference! Interesting that both have different views, but live together.

I can definitely relate to this

Just considered it part of the story

I tend to do this as well–just follow the story and get immersed in the world, as it presents itself.

more of an opportunistic criminal who wants to take shortcuts instead of working for it.

Nice observation here. What specifically made you view him as someone who wants to take shortcuts? Would love to know more about how you came to this conclusion so far!

I feel the fear in this is Batman’s fear to live and move on after his ward/son Dick was killed.

Really like this idea of Batman’s “fear to live and move on”.

Bob is definitely not one of those people.

Agreed here. Especially in the early pages, it seems to me that Bob is a scared man pushing himself to do bad things to provide for his family.

The 3rd person narration is really fun, especially as the narrator (and their audience) are both unsure how accurate the tale actually is.

I LOVED this too. It makes me feel like I’m just listening to someone next to me tell a wild story. I also really like how it’s not entirely clear which character the narrator is referring to a few times–makes following the story more fun.