I’ll try to join in!

I can’t tell you how much I loved this twist on A Christmas Carol. Painting Batman as Scrooge was such an unexpected take – to lay adjacent his very black-and-white views on the world to those of someone who actively made peoples’ lives miserable was not anything I’d ever think would be written of B-man. And it was done amazingly!

And the art, I can’t gush enough about that art.

Incidentally, another DC twist on A Christmas Carol just hit shelves today – Nightwing goes through his own ghosts of Chrismtas Past, Present, and Future, as represented by three Batgirls, in Batman: Urban Legends #10!

Nice! Thanks for the rec–I’ll have to check this one out!

YAYYYY I’ve been dying to read this book for forever and I didn’t realize it was added to DCUI!

I am looking forward to reading this title also. I’ve got some catching up to do, but I am in.

I think the holiday season feels almost like any other day in Gotham.

Everyone is probably very cautious with not knowing what villains might be about and trying to get everything ready in time for the holidays.

Although, there is the hope that Batman would protect the city so that the families could enjoy the holiday season.

Or… At least just one or two days of the year without incident.

That was an interesting question that the narrator posed.

I took it as those times that are asked to believe in the impossible to be possible.

Certainly on board in that everyone can change if the effort is there.

Definitely think he is just trying to get by in life and that life has thrown a few curveballs at him. Sorry those circumstances made him snap at little Timmy.

I think fear in this book is whether or not end will meet and whether or not the decisions that are made to make those ends meet will be a disaster, or quite possibly things working out well in the end.

The way Bermejo plays with the theme of fear in a holiday-themed comic book is definitely fascinating and very much looking forward to seeing how it all plays out in reading more of the story.

Ah, yes, very much so and will look forward to others that can be picked out as well.

Oooh, I really like this imagery. Would be awesome in a holiday-themed story!

I’m not entirely sure yet if the narrator is referring to Bob or Batman (or both), but I’m definitely interested to find out.

but I think for a lot of people this time of year does bring up some bad feelings, including fear of not being able to provide for family, or fear of being alone

Really interesting observation there–and definitely a true one, in my opinion! The holiday season can be complicated for a lot of folks, I think it’s great that you made that correlation.

And it was done amazingly!

What do you think the holiday season feels like in Gotham City? Hopeful? Fearful?

In the opening pages of Batman Noël, the narrator asks the reader to believe in something…how did you take this ask? Was it something you were onboard with, or did you need a little convincing?

I mean, it’s the conceit of the original novel, that a bitter old man set in his ways can have a change of heart. I can picture Batman as the focus in this being a bit of a harder ask, since at most Scrooge is just a bitter old miser who’s lost his ability to connect with people. Batman is all that plus ultra vigilant and violent.

How do you feel about the character of Bob? Do you think he’s a hardened criminal, or is he just trying to get by in life?

That’s hard to say with what little we see of him so far. We see that he’s a man taking care of a young boy with ailing health, but we don’t really know how “Bob” got to the position of a Joker henchmen.

Fear is an unusual concept to pair with the holiday season. What role do you think fear plays in this book? Do you enjoy the way Bermejo plays with the theme of fear in a holiday-themed comic book? If so, why? If not, why not?

Honestly, I don’t think fear is an unusual concept to pair with the holidays. I’m reminded of a line from one of the Doctor Who Christmas Specials (I think it was A Christmas Carol, even) where they generally describe the holiday season being celebrated on this planet as “halfway out the dark” and that description has always stuck with me.

Think about it: it’s dark – literally, around here the sun sets at like 4PM right now. The sun, the light, is literally the furthest away it can be for us. It snows, a bitter cold that literally kills the nature around us. Hell, there’s even a diagnosable mental disorder about it, seasonal affective disorder.

Honestly, I think that’s why the holidays exist in the first place. It’s cold, it’s dark, the world is dying around us, so let’s get together, throw as many lights as we can, eat and drink and be merry, give each other gifts, anything to try to beat this feeling of darkness and fear within us.

…Okay, I might have gotten a little too metaphysical with that answer.

The correlation between Batman Noël and Charles Dickens’ A Christmas Carol is clear from early on in the book. Did you enjoy the intertwining of these storylines?

I definitely think it works. Actually, it’s not the first time that we had a story like this. Back in the 90s Jeph Loeb and Tim Sale did their version of this for one of their Halloween specials. Though honestly, as hard as it is to beat that Loeb/Sale combo, I think Bermejo did it just a little bit better… 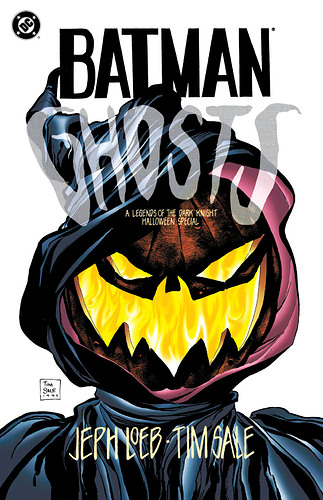 Think about it: it’s dark – literally, around here the sun sets at like 4PM right now. The sun, the light, is literally the furthest away it can be for us. It snows, a bitter cold that literally kills the nature around us. Hell, there’s even a diagnosable mental disorder about it, seasonal affective disorder.

Oooh great observation. This is a really interesting take on the holiday season…I never considered it to be a sorta constructed celebration to counter nature’s darkened state. Really cool!

I think it’s safe to say this book was asking me to read more.

I’m very curious to learn more about where this goes!

I think Christmas feels hopeful. It’s said that love was what fueled Bob. Timmy managed to make a Christmas tree. And the storyteller clearly heard this amazing story.

I don’t believe people can change. I don’t think I can be convinced. That being said, some good people do bad things.

I feel bad for Bob. I think he’s just trying to help his family. I don’t think he really even cares about the danger he may go through, as long as his family is safe.

I think fear is in in the book for the sole purpose of showing tension. There is so much tension and struggle with Bob’s family, and with the rivalry between Batman and Scrooge (who I think is Joker).

I loved the intertwining, but some parts confused me. Like, is Batman Scrooge or is Joker Scrooge?

So, first I love Bermejo’s art. I first saw it in Batman Damned and it was my favorite thing about the book. This piece does not disappoint.

Second I couldn’t stop at 27, I’m looking forward to the next set of questions.

Third to answer these,
Gotham is always more hopeful than fearful. You would have to be to live there, during the Holidays I think more hopeful.

2- it is a strange ask, initially it’s not clear what you should believe in. But as we progress, it becomes a little clearer.

3- definitely on is just trying to get by. He commits crime out of circumstances, not because he wants to

4- the fear play in this story is common among Batman stories, the twist is the fear we see from the Dickens aspect.

5- I,d like to see how it develops and the correlation before I make that determination.

I don’t believe people can change. I don’t think I can be convinced. That being said, some good people do bad things.

Very interesting take. Personally, I believe in the power each of us has to make changes in our lives for the better or worse and even to become better or worse people. Alas, this has been discussed time and time again over the ages.

Gotham is always more hopeful than fearful. You would have to be to live there, during the Holidays I think more hopeful.

I think that’s the power of hope, honestly. It’s so strong that it will exist in the hearts of those who need it anywhere and everywhere in the world… kinda makes me think back to the story of Pandora’s Box

What do you think the holiday season feels like in Gotham City? Hopeful? Fearful?

The citizens of Gotham seem to be in a constant cycle of fear and hope. Any period of hope is only magnified by the intensity of the fear experienced before it, and vice versa. In Noël, we see both sides from the experience of Bob. I personally would be afraid all of the time, Gotham is nuts.

I am not a religious person, and reading this book for the first time, in panel-by-panel view, coming across a line telling me that the ability to believe in something was required for this story? It had me a little hesitant. But the belief that someone can change for the better? That is something I really do want to believe in, even if I’m not entirely convinced, I always enjoy a story that fits this narrative.

Bob’s just trying to get by. I see Batman’s interrogation of him as a reflection of Batman failing to see the humanity he’s trying to protect, rather than a hardened criminal getting what they deserve.

Fear is central to Bermejo’s take on A Christmas Carol. Bob is the clearest example of this. He is afraid he won’t be able to provide for his family, which leads him into crime. He is afraid of his employers (both Wayne and Joker), unable to stand up to either of them (initally…). But I also see Batman’s fear of ageing. Noël features an older take on the Dark Knight, he has been through the same cycle of violence for years and years and yet nothing seems to change. He sees time running out and is desperate to finish the fight before it’s too late, or he will have lived and died for nothing.

I was repeatedly surprised and enamoured with how Bermejo drew parallels between the two worlds. I thought it was fantastic and each reference to Dickens’ work was well-earned.