[Superman Fan Club] and Supes Fans at large, welcome to another rationing of the rare rare rare digitized Silver and Bronze Age tales of Superman featuring Lois and Jimmy and a host of special guest stars including Batgirl! 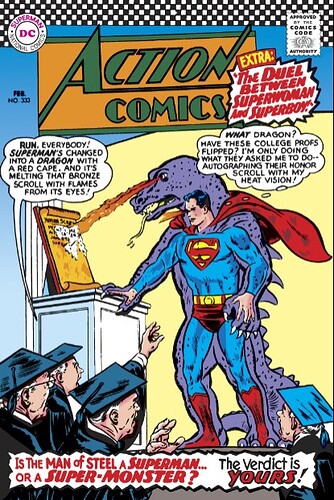 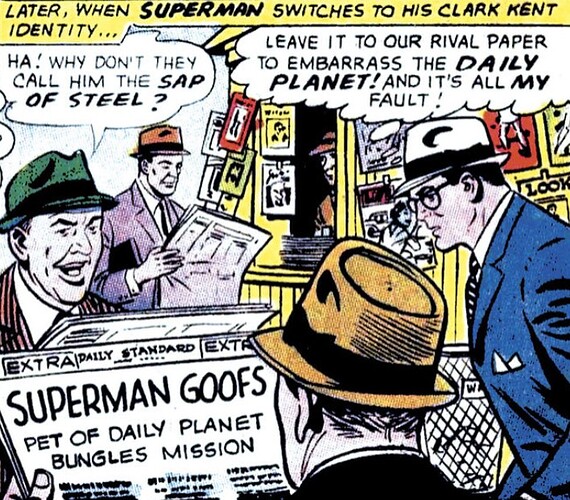 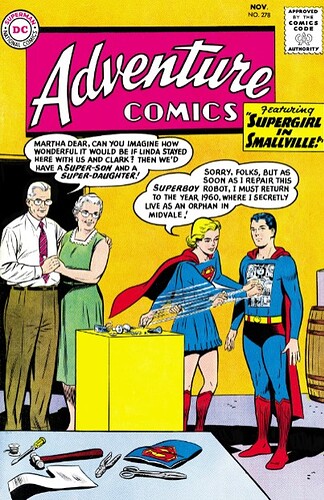 Adventure Comics #278 (released 11/1960) DC UNIVERSE INFINITE Supergirl flies to Superboy’s time to see if she can protect her identity and prove to Superman she’s ready to be revealed to the world. Wow, just…wow. Supergirl, how about we have you sit it out in the Phantom Zone for maybe 1,000 years to reflect on using time travel for wildly selfish stuff if you pull a stunt like this again, hmmm young lady??? Tsk. Again, TTSSK! 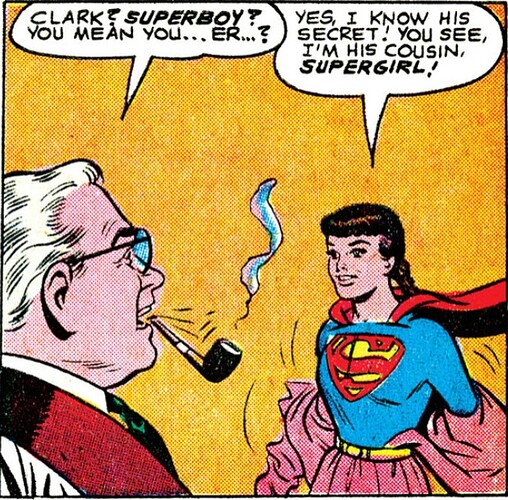 If you want to read the other stories in this issue, dig in for those as well! 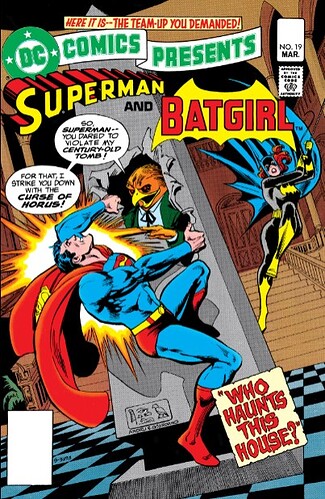 DC Comics Presents #19 (released 3/80) DC Comics Presents 19 Click Here Superman and Batgirl, the Team-Up You’ve Been Demanding (it says so right on the cover)!
Could this have been the secret origin of the Court of Owls? 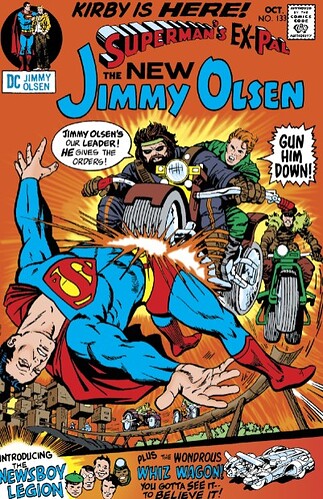 SUPERMAN’S PAL, JIMMY OLSEN (1954-) #133 (released October 1955) Jimmy Olsen 133 Click to View Yup, time to jump aboard the very first issue of the Jack Kirby DC 70’s Crazy Train! You’ve never ever seen anything like this stuff before or since!! The very beginning of what would be the New Gods saga! 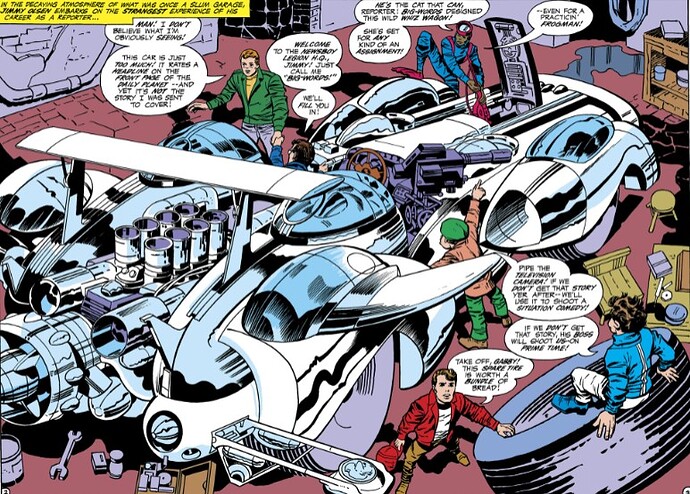 Oh, no Kirby here that we know of, maybe in the next panel over though lol… 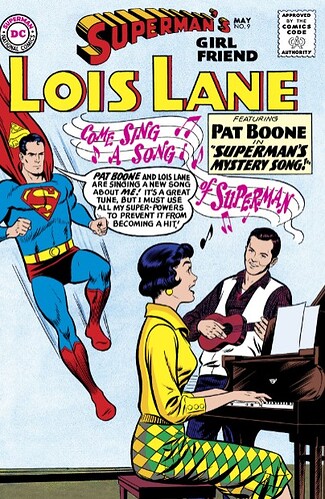 SUPERMAN’S GIRL FRIEND LOIS LANE (1958-1973) #9 (released April 1959) Lois Lane #9 Click Here! “THE MOST HATED GIRL IN METROPOLIS.” When a story that Lois had written and subsequently discarded is found by the Daily Planet copyboy and published, everyone believes Lois has deliberately revealed Superman’s secret identity. 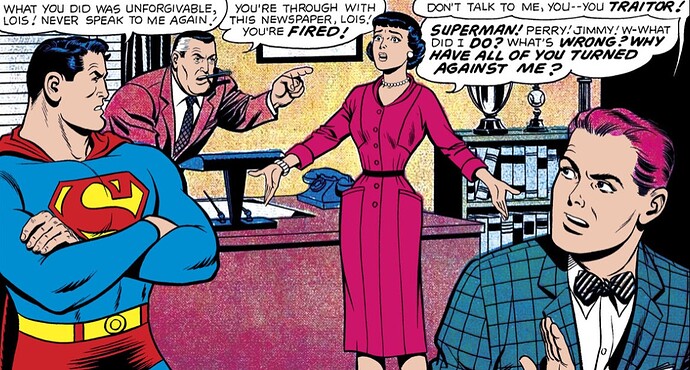 About time I say, after all the times Golden and Silver Age Lois has been so very wicked towards Clark and Superman as a reporter , here here!!!

Also, Crooners last month with Jimmy, crooners appear again here for Lois Lane this month (actually 4 and a half years had rolled by between the Jimmy issue of last month’s reading and this Lois issue #9).

Please consider sampling some or all of these classic Silver and Bronze Age wares, and let us know your thoughts! Feel free always to post favorite panels / scenes etc from these exciting, entertaining and imaginative tales.

Man I really need to catch up on this club.

I will say that I did read the first issue of Jimmy Olsen here because after the sad cancelling of the New Gods movie I was reminded that I really needed to fix that blind spot and finally read that Jack Kirby New Gods saga. It’s definitely a fun start, with a vibe that while still rather zany and over the top like other Silver Age-y fare, it has a harder, action focused edge to it that makes it stick out even more than Superman’s books at the time.

I’m pretty sure Jack Kirby’s brain was on fire at that time, both as a writer and an artist.

So, watching the Bucks game and reading comics that I’d give a look at Lois. Silly fun as always but the art really caught my attention. In the first story it looks like DC had someone come in after the story was done and redo all the faces. 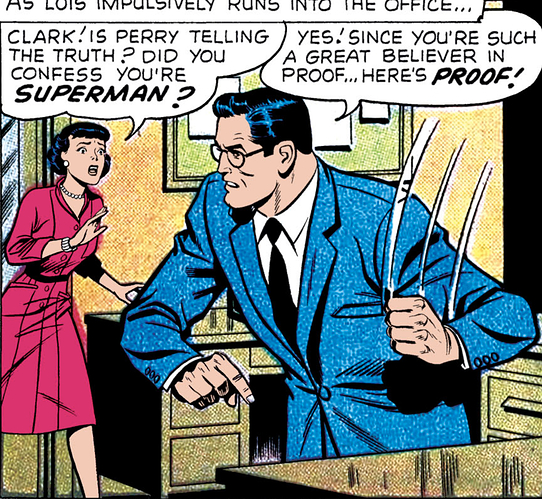 Hard to say for sure, but they did redo Jack Kirby’s faces when he first came over in the early 70s.

I’m still trying to wrap my mind around those giant pockets on her dress… and Jimmy’s purple hair before it was the style.

I did notice the pockets 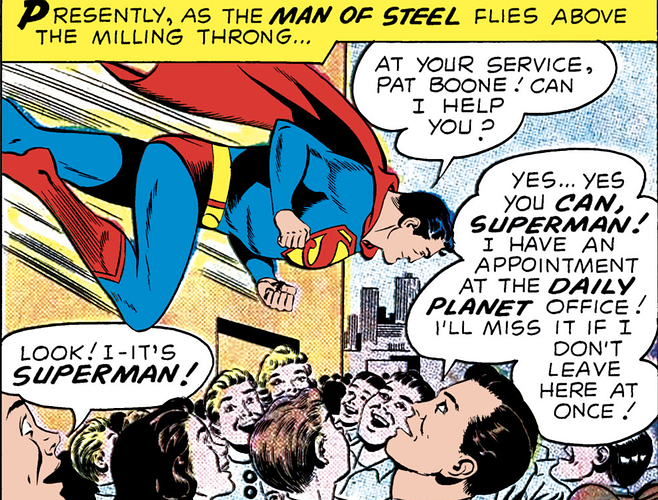 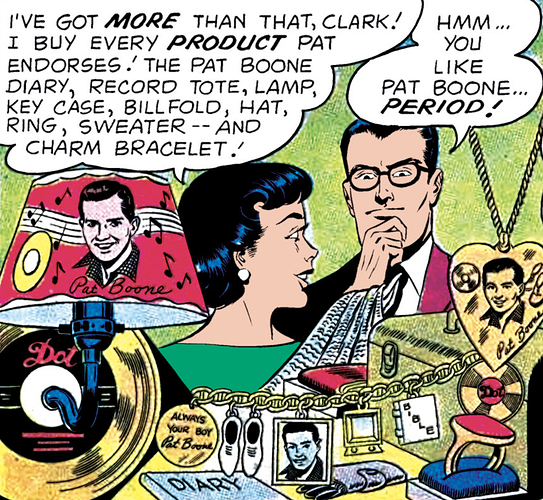 Also that looks like a Mac computer on that key chain

I actually have a piece of original comic book artwork that shows what they do to edit faces etc. When I get a chance later I’ll take some photos and post it. It’s a little startling what they can do before they apply the final inks and color.

Cool. My guess here is that they didn’t like the way Pat turned out, so they had another artist rework every face in the book.

In some of the panels I will post soon I had this one picked out as well. 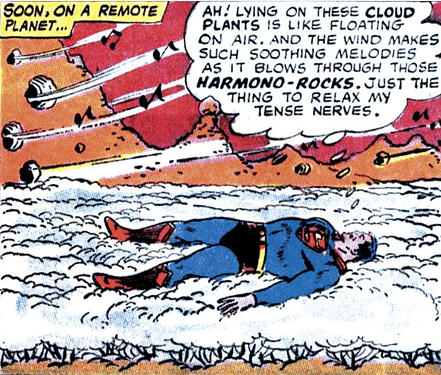 Superboy’s scheme’s to also get kids to not be adopted, but only himself… 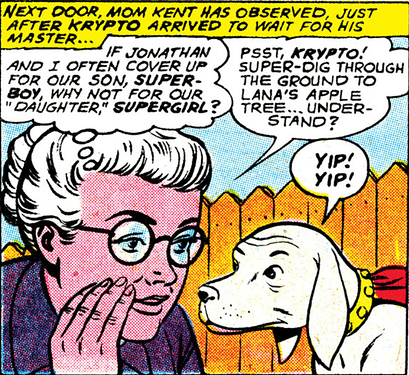 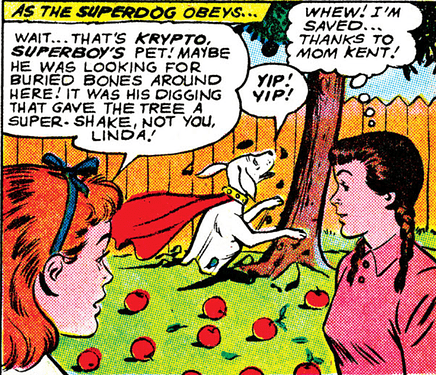 Time to grab the salt. 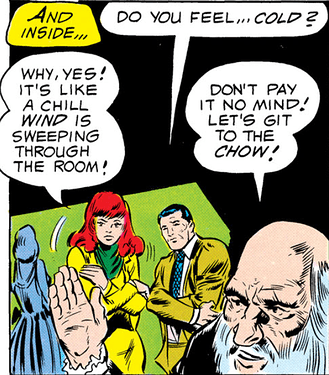 I’m also not sure I get the comparison either Batgirl. 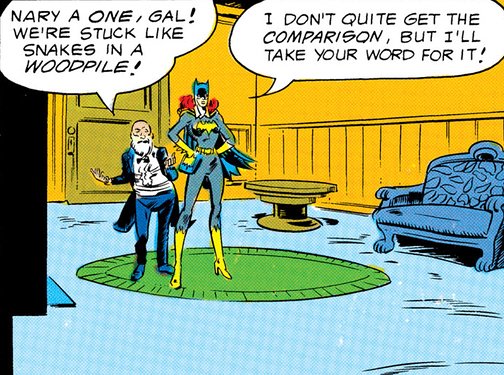 It will also be a sad day in the future Clark when Morgan Edge takes over The Daily Planet. 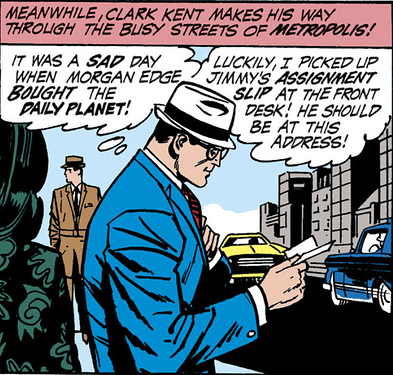 Poor Lois and her story on Clark being Superman coming back to haunt her again. 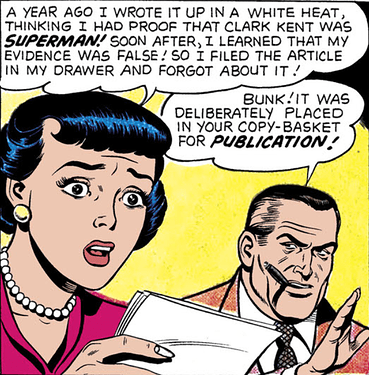 I was also reading this book and the second part to its story not too long before diving into this week’s reading which was fun reading about previous adventures that also included dinosaurs. 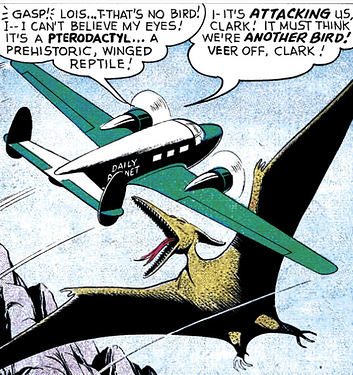 Admittedly the more recent dinosaurs with Superman and his son storyline was a little more rational then some of these fun tales from the 50s and early 60s, lol.

I’m still trying to figure out that bracelet …I suppose we should do a web search for the Pat Boone fan bracelet …they had a Bible and what looks like a TV, and some shoes… wow just wow.

Admittedly the more recent dinosaurs with Superman and his son storyline was a little more rational then some of these fun tales from the 50s and early 60s, lol.

Ah, it just occurred to me that maybe in that particular book a page could have been left out showing Lois and Clark traveling through a time barrier.

Or maybe it was just having read Supergirl traveling through a time barrier as well that made me think of it… So in conclusion for these mysteries… One partially solved!

Or at least how I’d explain it to make sense.

You are now the official first trainee for the club!!!

Jimmy Olsen has always led a life like no other, the Adventures of Superman radio show (wait til you hear what he’s up to next month there), his own comic book series of the 1950s, 1960s and even into the 70s…like exhibit A here: 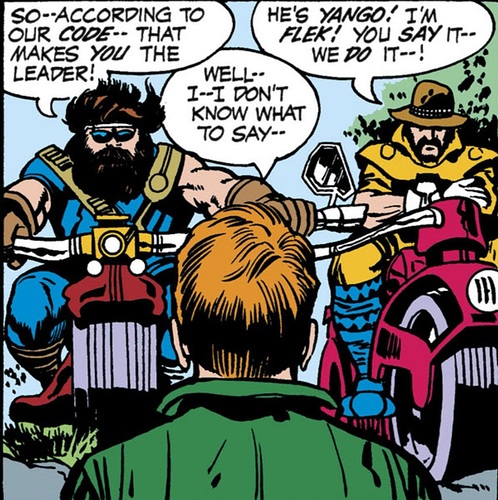 What kind of orphanage are we running here anyway? A couple show up, maybe adopt a kid, maybe not, what the heck they’ll just take who’s every available. Superboy here is down right rotten little turd. Destroying those orphans chance at a happy family. But, then again this is an orphanage where kids have private rooms and can afford jewels and doll collections. I really thought Superboy was going to turn out to be from the Phantom Zone himself.
Poor Supes, he’s been driven mad by Lex.

Maybe the moral of the imaginary Supergirl story is, " hey kids, if you were born the middle child instead of the last you would have been evil tooooo!