Gather round, faithful [Superman Fan Club] devotees and other interested parties! All are welcome as today, this is the hour that we strike with our enthusiastic reading and reflection for all things Superman Silver and Bronze Age!!!

For this, our first reading, I would like to suggest that we take a sample from the beginning, middle and end of the Silver to Bronze Age available runs within Action Comics and Superman comics on DCU. 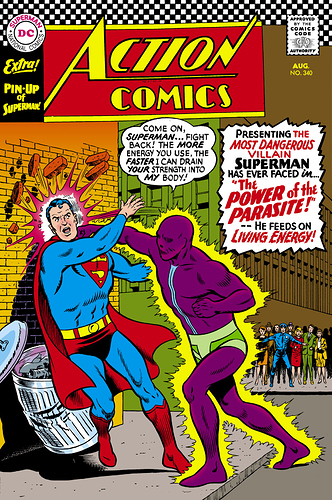 SUPERMAN (1939-) #76 (May 1952) Superman 76 For the first time, Superman and Batman learn each other’s secret identities when they meet on a cruise while trying to find a diamond thief. Consider this a bridge between the Golden and Silver Age, an interface if you will between the two “ages.”

ACTION COMICS (1938-) #252 (May 1959) Action 252 Witness the origin and first appearance of Supergirl in ‘The Supergirl from Krypton!’ An example of the many “canon” standards to our modern day Superman that had their origins in the Silver Age of Comics.

SUPERMAN (1939-) #233 (December 1970) Superman 233 Clark Kent moves from newspaper to television journalism as the Bronze Age of Superman unfurls before our eyes… and sports a great new branding look complete with super-neat Neal Adams covers! Oh, and something about “Kryptonite No More.” What a cover! We’ll be revisiting this soon!

The End of the Bronze Age Superman on DCU 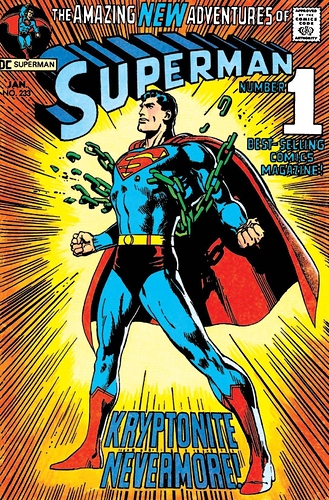 Thanks, this looks like a great selection, the two weeks also makes it easier for me.

Up, up and away

Cool! I’ve read the first issues a couple of times, but looking forward to getting into them and the rest. Also glad that there’s a Superman Club again in general – the whole Trinity should have a presence here.

I deeply wish the oddly-missing bulk of Silver Age Superman was digitized, but we’ll make the best of what is here—kind of making an omelet with the ingredients we have.

Very tempting to offer readings for those who have the black and white Showcase editions or hardcover DC Archives of early '60s Supes that features so much about the Fortress of Solitude etc, but that would shut out too many Superman fans, especially when so many are either out of work or working for less now.

And it’s a rather impressive one, too. Parasite was the perfect villain for Silver Age Superman. He could actually get around the Man of Steel’s invulnerability without having to resort to space rocks!

And something about the art for that issue feels very “grown up” and mature. The build and bulk of the bodies make both the Parasite and Superman seem to be in their mid 30s or older.

Which radical changes resonate with you as intriguing or even much-needed for the Superman backstory, and which ones were way over the top in your opinion?

Obviously, getting rid of Kryptonite was a step too far, and it was doomed to be undone. The TV news reporter thing, though…that makes a whole lot of sense, and I never understood why John Byrne undid it. Clark Kent feels less modern now than he did in the Bronze Age!

I remember when I first saw those issues with the Adams covers and the wild changes and thinking, “ok, now Superman feels modern.”

I had read Superman 76 and Action 252 before but read them again. Even though they are of their time in the way women are viewed and treated I do enjoy them. I’ve also listen to over 1200 episodes of the Adventures of Superman radio show so I’m used to stories from even further back. I’m certainly glad comics have come along with regards to sexism but I can enjoy what was made back then considering the culture that existed at the time.
Action 252 is my favorite first appearance of Supergirl. This may be, however, because it’s what my daughter and I read when I introduced her to Supergirl with the Showcase volumes. She became a big Supergirl fan through those stories and we enjoyed sharing those together. My Supergirl can tell you what year Supergirl first appeared, 1959. One year, when she was maybe 10 she wore a Supergirl costume for Halloween and she got sick of people calling her Superman. She wanted to tell them that Supergirl has been around since 1959 so get with it. That was before the TV show so maybe it would be different today.

Your story about your daughter’s enjoyment of the 1959 version of Supergirl is pretty remarkable considering it happened before the current CW Supergirl craze (I plan to watch last week’s Supergirl “Lex” episode this weekend).

Your reflection on Action 252 and how your daughter enjoyed how Supergirl was presented at that time brings to mind that the other Supergirl origins always seem to make Supergirl either super alien or just a fish out of water in our world, unlike the orphan Linda Lee.

True, they can’t seem to figure Supergirl out anymore. They seem to think they have to make her dark but that’s not the character.

If only they had an older, more mature version of Kara from a parallel universe who could shoulder those darker stories instead…

That would be a very POWERful concept indeed!

pulls his head up from the reads

Working my way through the Parasite issue. Love these old stories. I shall return as well. Mwa. Ha. Ha. Ha. 3 Ha’s, I win! :flexmentallo_dp:

Nice to see the old Superman gang from our Discord days get back together again! I wonder how @dccomicsincrisis is doing?

Agreed. Do you remember Action 252 being the first comic we discussed on a thread? Definitely gave me WoS flashback. I haven’t heard for DCCC in a while. I called him a few months ago but never heard back. I hope he’s doing ok. @Vroom hope all is well for you as well. I did a quick rough sketch of the Rocketeer the other night and just put it on the sketch dump space thread. When looking for an image to use I came across a story where there was almost a Superman/Rocketeer team up and there was some art that I believe was original for it and not fan made. Man that would have been a cool story!

All-Star squadron in the 70s was a lot of fun showing the JSA in World War II but with more modern sensibilities in the artwork and in the storyline with more emphasis on personal life and characterization, personal growth and development that kind of stuff… wouldn’t it be cool if someone did a similar concept about Superman with the Rocketeer set in pre World War II! @AquamonC137