Lotsa questions regarding the ending of this episode….

And why did he run when he killed Bizarro?

Great point. Maybe that really means that Bizarro’s not really dead(?) Even still, he abandoned the body, so who knows lol

Lotsa conveniently absent data at the end there

He had to pee. 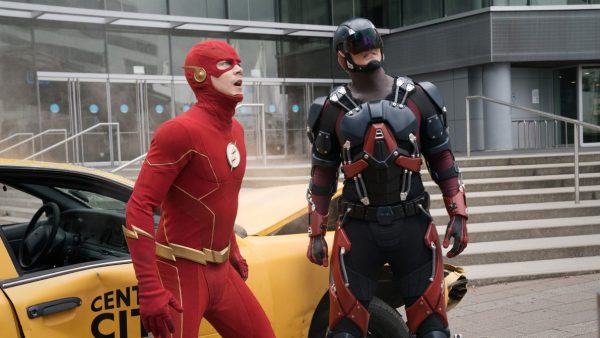 The CW has handed early renewals to a large portion of its scripted schedule including The Flash.  The network also has renewed All American, The Flash, Kung Fu, Nancy Drew, Riverdale, Superman &am…

This season is just angering me more and more. They better not destroy Jordan and Sarah!!!

You are on your own now. I gave up after last episode, and it was very liberating.

Loving this ‘path of a hero’ story they’ve sprinkled with Jordan through out the season. He’s going through what Clark has, being absent for the people in his personal life due to superhero obligations. Hopefully when Clark finds out about his actions we get a good convo about being a hero and its sacrifices.

I could see Jordan and Sarah split because he can’t balance the two with her. I like them together BUT I also like our heroes (proto-heroes) dealing with consequences of their heroism (like Spider-Man). It’s kinda poetic for Jordan and Sarah to split since Clark didn’t stay with his boyhood crush of Lana and eventually ended up with Lois. I’m good with whichever direction they choose.

My heart explodes for these cute Clark and Lois moments.

My eyes started to roll when Chrissy began smiling levitating towards the portal thing. Thankfully she snapped out of it real quick.

I don’t think there’s any going back with Lucy anymore. What a crazy twist tho. At first I thought something was happening to Sam’s other self that effected him.

Lucy got me. I should’ve seen it coming.

That really threw any hopes of a redemption out the window

I’m getting very close myself. Why do Kryptonian shows almost always disappoint me, Krypton, Supergirl, now this one. Only one that didn’t is Smallville.

I was hoping she was finally free from Allston, but I wasn’t surprised at what she did to her own father.

I gave up after 3 episodes. That’s usually when I determine definitively whether I should continue watching. Season 1 was much better than season 2. Let’s hope the newly greenlit season 3 is better than the current season.

One of my favorite scenes was Clark’s talk with Natalie. She’s been hostile for a very long time, but in a way, I could totally understand where she was coming from. You have to see the face of the man who killed your mother–granted, this isn’t the same guy, but it’s still gotta be jarring. Not to mention your father got hurt helping this man, and he didn’t pick you up from the hospital. I’d be upset too. They could’ve gone the standard route of Natalie just being a hostile, pissed off teenager who thinks she’s always right and doesn’t want to hear a differing opinion because it’s not hers, but they didn’t. And frankly, we all would’ve gotten sick of that over the course of time.

I like how Clark handled it, though. I’ve seen a lot of adults try to approach hostile teenagers and it rarely goes well. But some of Clark’s greatest attributes is his compassion and kindness. He got through to Natalie, showing her he understood where she was coming and offered to build a friendship over time—not now this instant, but when she was ready. That was pretty cool.

I’m eager to see what happens with John Henry and Natalie down the road. I’m hoping they rebuild the Steel suit. If Natalie got her Steel suit, that would be cool, too. I love that they can bond over building stuff. They both have brains and skill, so they could make something pretty special.

John still dealing with the consequences leading to home school work and more. Jordan helping him out knowing why he’s doing which is nice that’s it not all ganged up. But thing hit real for him walking Candice home. Jordan looked awesome™

. But missing his meet with Sarah. The double life of a hero. Always a struggle. Will this lead to a reveal or a split?

Nat and Steel out of the hospital. Tragic stuff with her lost in nothingness of f Crisis. Still having its impacts. But seems to be getting better with there own place now.

Lana and Kyle dealing with splitting up. And letting things out helping each other. Seems like it hitting them both it’s more permanent with Kyle getting his own place.

Supes dealing with Ally and Anderson. The portal is open and he save Christy and some. Ally is captured and things seem sort of good with Lucy missing being the issue. The return and all seems normal until the double cross. She definitely in deep now.

Fun Killer Instinct cameo and the Clark and Lois moments were great with the fun moments like the Rock Paper Scissors.

Will Superman save Sam? Is Lucy truly lost? Will Sarah forgive Jordan? All this and more Same

Another Great Show!
Jordan Saving Both John and Candace!
Lucy Might Have Been Gone For Ever!

Lucy Drugs Her Father!
All Too Get Ally Too the Other Side!
Father and Daughter Get Their Own Place!

Superman Didn’t Do Too Much!
Superman Saved A Group of Cultists From Themselves!

I’m still upset that the show continues to neglect any mention of Kara, but it felt especially egregious in tonight’s episode. Clark is gone for an entire month, and yet there’s no mention of the world’s only other Kryptonian superhero? I wouldn’t expect her to actually show up, but it would’ve been so easy for Lois to drop a quick line like “Supergirl’s been doing everything she can to help around the world, but we still need Clark back” or something like that. Despite some improvements in connecting to the larger Arrowverse, this show still feels far more disconnected from the world than any other Arrowverse show