This thread is to discuss Season 2 of Superman and Lois.
Chat, theorize, lurk, and Enjoy 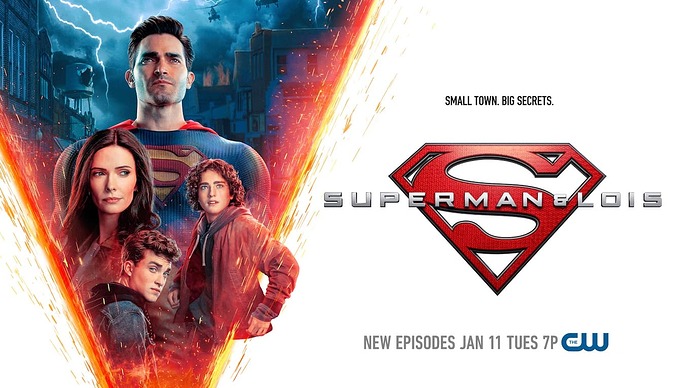 The big news. Natalie is back and a 3 month summer skip. Lois was not handling it well at all. But seems to wrapped things up nicely in the end. Lois confronted the situation and some backstory with her family. As well as Natalie struggling as well and John doing his best. Seems like she and John will be living with the Kent’s. Interesting. I have a few Nat may be working at Paper with Lois.

Jordan and Sarah having some relationship troubles. Did she meet someone at Camp or is he moving to fast for her.

John just having some troubles at football. But going well his Girlfriend until Luis see’s it all. Whoops. Then the good ol parent talk. Fun family stuff there.

The Kushing’s. Lana seems to be helping to elect a new mayor and Kyle not so into it. But they overall seem to be doing better.

Supes. Out doing his thing saving the ships but America not to fond of global allegiance. But they seem to be using those X Kryptonite people or something for there own super army with Anderson at the helm.

And the big end those earthquakes and the fist. My thought went straight to Doomsday.

How will the Irons and Kent’s live together? What’s Anderson goal? What was that fist? All this and more Same

They better not destroy Jordan and Sarah!!! They can’t!

I liked the son drama and was bored by the Superman and Natalie drama.

That is true. They could be pulling another twist

Really admire how the show handles drama in convincing ways but not letting it be stretched or over-stay its welcome.

They’ve done a fantastic job with representing Lois’s trauma and distress with how it effects her mental state.

I could see Jordan or Jonathan handling the situation Natalie’s in very similar to her if they were in her shoes. For instance Jonathan was sick of Smallville and wanted to go back to Metropolis so imagining how displaced Natalie feels must suck where there’s no one or no where to go back to. (assuming this was a 1 way trip)

Curious about how the dynamics will be between the boys and Natalie. Remember to season 1 Jordan and Jonathan had some sweet moments when they supported each other, would be great if Natalie gets to develop that type of bond with them.

As always Clark trying his best

Always love these one on one convo’s between him and Lois when they reflect on themselves. Really shows off the maturity of the relationship and adds depth.

IF Doomsday is here I have faith they’ll handle it well so by default I’m hyped. Given what we got with Morgan Edge + “Lex Luthor’s” characterization last season I’m looking forward to see how they handle the new General + possibly Doomsday (

For those wondering about Doomsday… I found this here. 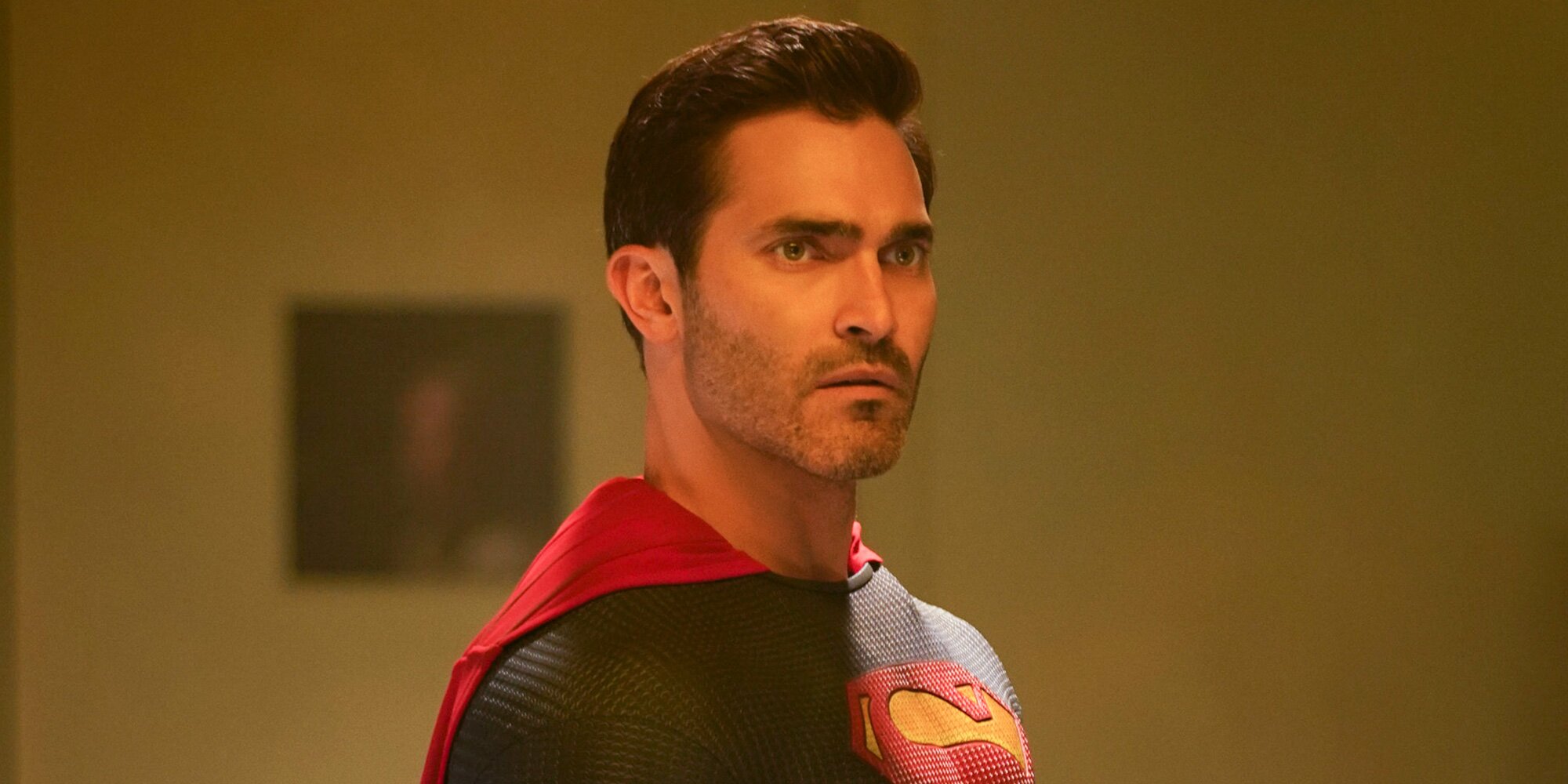 From it, here is what the Executive Producer said:

Superman & Lois showrunner Todd Helbing confirmed to EW that scene was indeed setting up the arrival of Doomsday, one of Superman’s deadliest and most destructive foes in the comics.

“That is our homage to a classic Doomsday cover,” said Helbing (see the referenced cover below). “Then in episode 2, you’re going to see him a little bit more. In episode 3, you’ll get the full reveal.”

Also that cover was in the article is from: 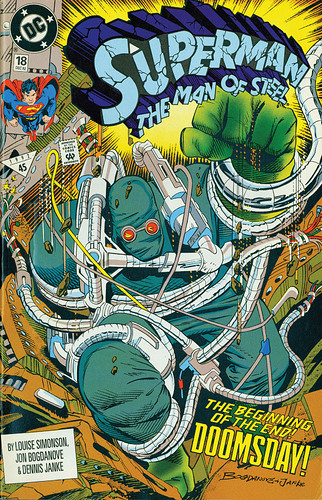 Superman: The Man of Steel #18

Superman continues to fight the Underworlders. With the help of Keith Robert Parks and Charlie, will he be able to bring them all down? Plus, Doomsday...

I definitely see that they did honor how it was in the comics.

A lot to look forward to again this season.

I missed the premiere when it originally aired so I watched it on the CW website. Here are my thoughts:

“In contrast, in the Central and Eastern U.S. (CEUS) the crust is thicker, colder, older, and more stable. Furthermore, the CEUS is thousands of miles from active plate boundaries, so the rates of deformation are low in this region. Nevertheless, the CEUS has had some rather large earthquakes in historical times, including a series of major earthquakes near New Madrid, Missouri in 1811-1812, a large earthquake near Charleston, S.C. in 1886, and the Cape Ann earthquake northeast of Boston in 1755.”

Son of a BENCHHHH! So they’re really doing one of the most dangerous and biggest villains already in Season 2? Isn’t it a little too soon?

Isn’t it a little too soon?

I think it might have something to do with this year being the 30th anniversary of that battle Superman had with Doomsday.

Although the show does have a habit of surprising me with the twists it takes so it will be interesting seeing how it all plays out.

My early theory is… The battle with Superman and Doomsday will happen close to whenever the midseason finale is. Then, all of us will have to wait until the show returns after its break to see the return of Superman, and Steel’s armor will eventually have an S as well.

Remember, the future is not guaranteed. If you keep putting off what you want to do it might never happen.

@HubCityAnswer is right. I’ve seen many TV and movie executives in interviews and on social media say, “We have so much epic stuff we planned for Season 2 (or the sequel) that we didn’t get to in Season 1 (or the first movie),” that never came to fruition because their show was canceled after 1 season or the planned sequel is shelved.

If they had Doomsday in Season 1, I would agree with you with it being too soon, but Season 2 is a good of a time as any to bring in the big guns!

I really enjoyed the season premiere. We’re seeing Smallville rebuild after last season, including the Kents. I’m also surprised how much I’m invested in Lana and Kyle. It would’ve been sooo easy to make Kyle the jerk for the entirety of the show, but I love that he and Lana are adjusting and trying to make things work between them.

Lois explaining how she felt when she saw Natalie…holy crap. Bitsie Tulloch is so good in that scene. Your heart breaks for not only Lois but Natalie. Its why when they have their talk on the bench, it’s such a cathartic moment.

So, I’ve seen a lot of people talk about the possibility of Doomsday this season. Some say it’s too soon while others say it’s the right time. I think I’m more interested in the build up to Doomsday rather than the pay off. A part of me really wants them to use the “quakes” sparingly this season. Build it up like in the comics where every time we see it, it’s getting closer and closer. Live action television-wise, this will be the third time we’ve gotten Doomsday in a show after Smallville and Krypton. I want to see what the Arrowverse take on Doomsday is like. Do he and Clark immediately go into their battle or do the writers have something else in mind? That’s what I love about this so far…the possibilities.

What I’d really like to see is Jon Cryer make a cameo as Lex, even if it’s in the finale. And yes, I know what happened to Lex at the end of Supergirl. But I still want to see Cryer’s Lex and Hoechlin’s Superman share some screen time. They were in scenes together during Crisis, but I can’t recall them ever really talking to each other all that much.

That is a common reason why they do not get picked up. They are more interested in the follow up and do not put enough effort into the first time viewing it as just set up.

Jon Cryer does not fit the tone of this show, he’s a joke. Michael Rosenbaum would got perfectly in this show.

But Cryer is the Luthor of this universe. And barring his last few appearances on Supergirl, he was a calculating and menacing Lex.

This show is amazing and i am so glad season 2 started off amazing. We get to see Jordan and Johnathan again.