Another awesome episode! The opening with Clark going through to the other side was an amazing visual. Steel filling in during Clark’s absence gave me serious Reign of the Supermen vibes. I’m happy for Lana, but even happier Sarah is seeing her father in a better light than a few weeks ago. I understood where Natalie was coming from given the importance of the day.

Jordan coming through for Lois and Sam was incredible. It sucks what happened between him and Sarah, though.

As for Candice I’m glad she confessed and got Jonathan off the hook, but was it me or did anyone else think she was going to die when she told Jonathan she’d walk the two blocks by herself?

That ending and the preview for the next episode has me hyped! Getting to see more of the Bizarro world is going to be a lot of fun.

I have officially dropped this show, what they did to Jordan and Sarah pisses me off so damn much!!! I hope they’re fixed by the end of the season but I’m done with the show for now. DAMN IT TO HELL!!!

I might be back for season 3. I currently doubt it.

This week’s episode does a lot of tying up and setting up.

Loved the dynamic of Jordan, Sam and Lois.
Between going through the superhero ringer of heroism, heartbreak + Tyler’s SUPERMAN theme playing for Jordan ! WOW

Wasn’t prepared to get teary-eyed during this episode. Felt so bad for JHI. Glad him and Nat could patch things up.

I like that they aren’t resolving the Kyle situation quickly and letting it ferment. Thank goodness Jonathan confessed finally ! ! And what a crazy direction they’re going now introducing Bizarro World Jonathan

I was confused about that too but Lois’s line about it being a big operation that’s been funded makes me think it’s not the last we’ll see of the fire tornado (whoever or whatever caused that).

Seriously. When I saw the online leaks of Jonathan in that outfit, I thought “Oh boy. There gonna amp up the teenage rebel angle, and make him look like Superboy from the comics.” Definitely didn’t think of this at all. They keep thinking of clever ways to incorporate familiar stuff with new twists.

Oh, you’re thinking it’s gonna be a recurring thing, huh? That would be interesting, adding another baddie into the mix.

Yes! Exactly! I thought they were gonna have Jonathan get hooked on X-Kryptonite, become this cocky super-powered jerk and would come to his senses in the season finale. You know other shows would do that.

Not this show, thankfully

Clark is gone in Bizarro world after Ally. Now a month passes and the world struggles in her absence.

Lana dealing with the election as her focus is on that and she wins. Nice but hope it doesn’t consume her. Sarah on the other hand with her dad going through it and deciding to leave Jordan she been through it but nice Father daughter moments.

Nat dealing with her moms deathaversary. Still struggling as John is saving people and trying to move but it hits him. That scene with him watching the video. But a sweet end to that. And I’m in the mood for waffles now

Lois struggling with the absence. And Jordan as a hero learning the struggles of a heroes secret. John finally reveals it all and seems to be in better graces. While Jordan saves Sam and Lois in a cool speed moment. Still wonder who Candice’s dad is?

unless I missed it being mentioned.

Then the end with Superboy classic John. Pretty interesting.

Is Clark gone for good? Why is John’s other a Superboy? Will Sarah and Jordan get back together? All this and more Same

As for Kara I think she may still be off world as mentioned in Flashes crossover. Hence why she may have not showed up.

Possibly, but at least Armageddon could actually be bothered to take a few seconds to mention that. The fact that S&L hasn’t just makes me feel like these writers don’t care about Kara at all

Another Superb Show!
Jordan saves Lana’s Husband and His Mother and His Grand Father!
Lana Wins the Election!
Hopefully By A Land Slide!

Candace Comes Out of the Shadows and Helps the D.O.D.!
A Very Surprising Episode!

Hopefully, It Just Gets Better From Here On Out!
Jordan breaks Up with Sarah!

So Todd Helbing finally addressed the lack of Arrowverse references on the show and said the end of this season will explain why that’s been the case. Though I definitely got behind the theory that this isn’t set on Earth-Prime early on, I think Dig’s appearance last season and Jenna Dewan’s return as Lucy just barely do place this show in the Arrowverse, even if it usually doesn’t feel that way. As curious as I am for this explanation, I’m also worried it’ll end up being more of an excuse for them not wanting to mention the other heroes. But obviously I can’t judge (too much) until we actually see what this is 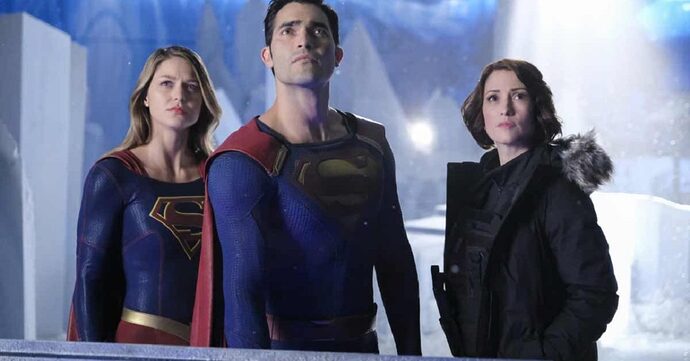 Superman & Lois EP & showrunner Todd Helbing dropped a ten-ton hint that viewers will get an "answer" to their Supergirl/Arrowverse questions.

Yeah the integration into the Arrowverse or lack thereof is not something that’s been occupying my mind much. Now that it will somehow be addressed though, I’m curious to see how they will do it.

I’ve appreciated they’ve been telling their own story. Diggle last season showed its set on Earth-Prime, but we haven’t been hammered over the head with references. Now that it looks like we’ll be getting some more interaction with something in the Arrowverse, I would love to see how that looks with the cinematography of this show.

What a ■■■■■■■ fantastic episode. Where do I begin? The brilliant rendering of Bizarro World and its characters? The completely original take on that world and what it means to be “backwards”? The tension felt in every single moment? The action that had no business being on a CW TV budget? This was the single best hour of DC entertainment I’ve watched in a good long while. Beats anything DC has put on either big or small screen of late. Well done folks, very well done.

Tyler Hoechlin’s frantic, crazed performance as Bizarro on his home world was really unsettling in the best way. After years of being accustomed to his relatively calm confidence as Clark, even in his angriest moments, seeing him completely lose his **** was pretty jarring, but he was fantastic at it. Hell of a way to come back from the hiatus

Tyler Hoechlin’s frantic, crazed performance as Bizarro on his home world was really unsettling in the best way.

It really was, and just seeing how he came to look the way he does and linking that to addiction is just a brilliant idea. Again, they take a concept from a DC comic (kryptonite addiction was Ultraman’s thing if I’m not mistaken), and apply it in a completely clever and original manner. I never really liked Bizarro or his world all that much before, but this version is just so well developed, I love it. So much better than the traditional “me am not” take.