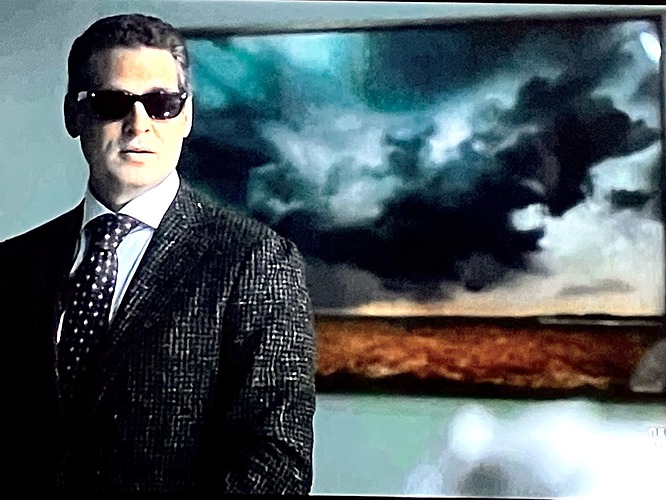 seems like a clear enough nod (the painting) to Hooty. Even had a shot with it sitting directly on his right shoulder.

Definitely been enjoying the season so far, but 4 episodes in and I keep wondering where Mister Bones and the Helix Institute are. I’m sure they’ll be back soon enough after the tease at the end of season 2, I just didn’t think we’d be waiting quite this long

Throwing us bones with this mystery.

I really enjoyed this episode.

It was particularly good seeing Dr. McNider again. And I’m thinking that cell containing The Dragon King’s DNA could be a red herring. I am with @arkhamassassin When are we going to see Mr. Bones and the Helix Institute begin? They teased with them at the end of the last season and they haven’t shown up yet.

I feel like Bones could be the 1 watching the footage from all those cameras they’ve been showing, but even that wouldn’t line up that well. I feel like it’d make more sense to reveal it’s him watching early on and build up the mystery as to why he’s doing that. But that’s assuming it’s even him watching anyway, so we’ll just have to keep waiting

Last night’s episode is clearly moving the murder mystery “ball” further down the field. Is the Dragon King really back, and behind everything? Has Courtney finally got a “cool” new boyfriend? Is Sylvester finally warming up to the Crocks? Is Charles McNider back for the long haul, or only to provide explanatory theories about death and resurrection? All this and so much more will no doubt be discussed in depth, by our usual commentators in the audience. For my little 2 cents worth, I once again return to Beth Chapel.

She has apparently received blessings from the original JSAer to carry on the role. Something I admit, I find a little hard to accept right now. All the others, taking up the mantle of their predecessors, have gained powers or abilities that make them formidable on the field of battle. Everyone, except Beth. Sometimes brains does not beat brawn!

So far, she’s been their tech-savvy, go to gal, when they need ‘er. But, she remains the weak link in their armor. Why? Well for one thing, she hasn’t even been trained in basic hand-to-hand combat. That’s right, I’m lookin’ at you, Yolanda. Because of this, and the obvious fact that Dr. Mid-nite has (for whatever reason) not provided her with any of his infamous Blackout Bombs. Or even told her how to make them! His ability to see in the dark, was always an advantage when using them against an adversary. You’d think, he’d want to give her that same advantage as well.

And don’t tell me that’s coming later in the series, 'cause that’s way to late for me. And maybe, Beth too.

Cameron cannot be turned evil!!! Cindy’s turning into a dragon, this is horrible!!!

I can’t believe how much I’m liking the Crocks.

U Feel Like Others Do!
Dr. Mid Nite Should Traun Beth!
The New Dr. Mid Nite!

Hopefully, Cindy Isn’t Turning In Too A Dragon, Like Her Father!
Either that, or Beth Can Cure Her!
I Don’t Want Too See Cindy, Turn In Too, A Dragon!

Can’t Wait For Next Week’s Episode!
Will Cindy Tell the Others She’s Turning In Too A Dragon?!
Will She Go It, Alone?!

P.S. I Hope Other Justice Society Members are On the Show, In the Future!
We, Need Too See More of Wild Cat! Yolanda!

I really like Beth, but you are right. After all this time you would think they would have trained her in hand to hand combat. Indeed, what happens if she is caught alone by one of the JSA’s enemies? Right now she could not realistically defend herself.

No in episode 8 she just hid her way to safety.

That happens, then I will unfortunately stop watching Stargirl. I tried to like Titans, but it is not something I like. Crossovers are only good if you like all the shows in the crossover. Arrow (to me) went downhill after Season 2. All the other Arrowverse shows included crossovers.

I think the evidence is about Sylvester’s issues. He is seeing evidence he needs to retire.

I like that theory, but it doesn’t match up. “The Murder”, “The Suspects”, “The Blackmail”, and now “The Evidence” all seem to correlate to Gambler’s death.

Last night episode was really good, the thing about the episode, it felt like a filler episode, by stretching the storyline for some characters. I’m not trying to make it sound bad, it was still good.

Clearly, the writers have a predetermined path for Sylvester to follow, this season. A trip that may lead to his ultimate destiny. So far, that seems to include a man who’s been resurrected, and lost in a world without place or purpose anymore. He was always happy to put Sylvester aside for Starman. Because that guy, was a self sacrificing hero! Now, Starman is all (he thinks) he has.

His constant belittling of Pat wore thin, early on. He just can’t see him as an equal partner, yet. Not after being his “sidekick” for so long. Plus, Pat has, and become, everything Sly always wanted and never had. I think the writers intend to rehabilitate his character by story’s end. The cost of that, still remains to be seen. We’ll all just have to stay tuned.

Just rewatched the skin cell scene. Dr. Mid-Nite "almost missed the skin cell and only found it at the end. That makes me think Shiv shed it while they were looking, and it was not there when they first looked.

Also, Wildcat and Shiv make Fiddler and Tigress look like a good team.

Mike and Jakeem still trying to prove themselves. Feel by the end they’ll get something right.

Sylvester survives and contemplates retiring after a night with Pat and Crusher and a convo from a nice return from Doc M but decided to keep the suit on and possibly pass it down.

Courtney learns about Cand powers and keeps her knowledge of that side of thing a secret but seems to bring the good out of it. But I see the lie May lead to worse stuff.

The team finds evidence down to a cell from Beth. Pretty cool. The dragon king cell though. And Shiv seems to be scaly to. But I don’t think it was her. The cell probably fell when she grabbed the lab top to look DKR a cure for this.

And now a week off. Hopefully the CW doesn’t do so many breaks like they normally do.

So what killed Gamblers? What happening to Cindy? What will Cams grandparents think of his relationship? All this and more Same Star Time Same Star Channel

When we first saw the TV monitor in last week episode, it reminds me of the 1989 Batman when we zoom back of the mirror Alexander Knox and Vicki Vale are looking out, we then see a camera that lead to a tv monitor in the Batcave, soon we learn it’s a batcomputer that Bruce is watching on.
So maybe Stargirl is doing a small tribute to the 89 Batman.

I think I understand your feelings about crossovers, and the need for shows to stand up, on their own, so to speak. But you’ve got to realize (and accept, I’m afraid) that Marvel completely changed the cinematic super-hero playing field. It wasn’t until we got the first Avengers film in 2012, that CW/DC (once again playing catch-up) gave us CRISIS on Earth-X, on the small screen. And clearly, these were popular enough, that we got more of them.

I mean just because Sgt. Rock & Easy Co. are pinned down, doesn’t mean that the Haunted Tank can’t pull their butts out of a Nazi fire every now and then. Sorry, my age is showing, and I digress. Crossovers are fine in my book. As long as they’re infrequent and work well (story-wise) for all concerned. A lot of the time they don’t, and are thrown together for purely monetary reasons.

But Marvel opened the floodgates, and there’s no going back. Only poor ratings, or poor box-office will make any changes here. So, just grit your teeth, and hope for the best. They may turn out better than you think.