Bob the Goon is the #1 Guy to The Joker, whose arch-enemy is Batman, who was trained by Wildcat, who was in the JSA with Ted Knight, who worked on the Manhattan Project with Robert Oppenheimer.

Batman was in the Justice League with Doctor Fate. 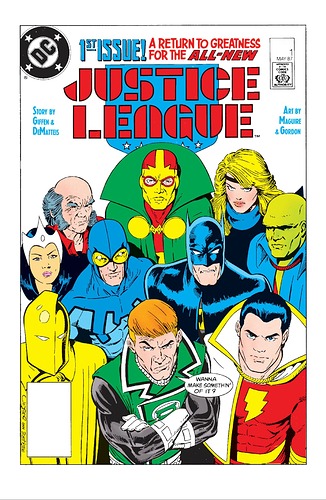 You get around, Bats.

Oberon manages Mister Miracle, who was in the JLI with Booster Gold, whose nephew is Dan Hunter.

Stan Lee’s Superman was imprisoned by the villain Prophecy alongside Kingdom Come’s Superman, who as leader of the “Justice League Multiverse” challenged the authority of Jonni DC.

Humpty Dumpty was in Arkham Asylum with Two-Face, who was a frequent enemy of Tim Drake, who was in Young Justice and the Teen Titans with Superboy.

Rose Red’s brother-in-law is Bigby, who faces off with Batman in Batman vs. Bigby! A Wolf in Gotham, who trained Azrael, who teamed up with Tommy Monaghan, who used to drink at Noonan’s with Six-Pack, who was in Section Eight with Defenestrator.

John Constantine has an on-off relationship with Zatanna, who had a young romance with Batman, who frequently works to rehabilitate Two-Face.

Guy Gardner is in the Green Lantern Corps with Hal Jordan, who flew in the Air Force with Negative Man, who’s in the Doom Patrol with Robotman.

Catwoman trained Helena Bertinelli, who had a brief relationship with John Constantine.

Wow, you’re good. I mean u are the Question afterall.

Detective Chimp was in the Justice League Dark with Man-Bat, who was rehabilitated by Batman, who trained Batgirl and Robin, who occasionally fight Condiment King.