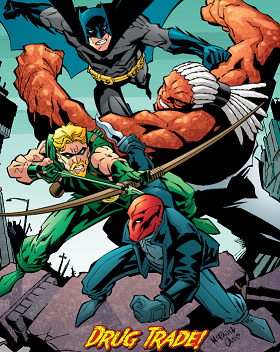 In this session, the Renegade Robins Club will look at Red Hood’s appearances in the pages of Green Arrow and Robin! Can Batman and Ollie get along? Can Tim Drake learn to trust Jason Todd–and should he? Tell us what you think in the comments below!

In two weeks, the @RenegadeRobinsClub will look at the Red Hood’s Lost Days! Meanwhile, get ready for Damian Wayne’s next outing in Teen Titans: Team Building!

Already? I thought we were doing the month on Countdown?

(Anyway, I thought that the GA arc had some interesting stuff in the Jason vs. Mia fight, but it felt a little phoned in. Really didn’t care for the Search for a Hero arc. Jason would not use child gangs for anything.)

Countdown is running for 3 months. We’re still progressing with the regular issues on the side.

Gotcha. Lot of Jason to discuss, I guess!

Eh, I figured that the Countdown discussion is less likely to be heavily Jason-centric, anyway. With all the different plot threads going on in that series, the Red Hood often doesn’t accomplish a whole lot over the course of any particular one of our weekly five-issue allotments (even if he’s an important participant in one of the major story arcs).

So can anyone tell me where the robin storyline fits in with Batman? I’m currently reading the beginning of grant Morrison’s Batman and Paul Dinis detective comics run (2006-2008) so I was wanting to read the robin story in order so I don’t spoil anything.

Robin’s “Search for a Hero” arc was released at the same time as Final Crisis, so it occurs after RIP.

I’ve got a question for the group: Who writes Red Hood the best?

I haven’t read many stories featuring him, but of the handful I have read Winick seems to stand out. I think it’s the way he writes dialogue, just the right amount of sarcasm.

Assuming that we’re talking about him strictly as Red Hood (not as Robin), then I’d definitely give it to Winick. Other writers didn’t handle him well at all before Flashpoint. Once we get to the Outlaws series, you can decide if you prefer Lobdell, but I still like Winick’s Jason a little better.

As Red Hood, Winick is probably the best. There are times when I suspect he hasn’t read much of Jason’s Robin run and get annoyed by him contradicting it, and there are aspects of the character he’s consequently introduced that I kind of roll my eyes at and ignore as a result, but in general his stuff is good. Lobdell did some decent stuff in Rebirth but is an overall weaker writer (to say nothing of… other concerns). I never read Injustice (too annoyed by some aspects of it I won’t get into here, and I got annoyed and checked out as a Waller fan when I tried to give the Jason arc a chance, though I might go back and check it out now that I’ve seen Taylor’s Jason at more length + know some later spoilers) but Tom Taylor nailed him in Unkillables and I’d love to see him do more of the character. Other writers do an okay job, and there are a number of writers I think would nail it (Christopher Priest, Genevieve Valentine and Ed Brubaker topping the list) but who haven’t really taken a shot at it yet.

As Robin, I like Max Alan Collins and Mike Barr best. Starlin introduced some interesting stuff to the character, which is a shame because he was trying to make him unlikable and didn’t like the character. Christopher Priest also did a really good Jason flashback story in the aftermath of Death in the Family, which is yet another reason I’d kill for him to get a run on Jason.

Jason’s Battle for the Cowl suit does look pretty cool, I don’t think it works as well as his Red Hood suit, though. It did get me wondering what an else world miniseries of Jason as Batman would be like. It’s possibly too similar to Flashpoint Batman to happen.

Also while musing on the Battle for the Cowl selection, it feels out of character for Jason to be trying to kill Selina. I didn’t particularly care for the writer’s choice there. From what I’ve read of the character it seems he primarily kills people involved with gangs and the drug trade.

Yeah, I don’t think that most fans of Jason Todd are all that fond of Battle for the Cowl. I mean, there are always people who will be happy with any Punisher-esque Batman (and it’s admittedly a little fun in small doses), but it doesn’t really fit with Winick’s Jason, let alone the Jason Todd of the 1980s.

I think I should to check out some of Jason’s run as Robin, I’ve read very little of it. I did read the Legends crossover a little while back and I remember thinking that I didn’t understand the dislike that a lot of people apparently had for Jason.

If you go to the main Renegade Robins Club thread (linked in the first post of this thread), you can find the previous sessions we’ve had. The club covered (almost*) every issue featuring Jason Todd as Robin, ranging from 1983 to 1988.

*A handful of issues are missing from the digital collection, so I had to post links to summaries of those issues instead. There are also two cases where the World of Bats club covered one of the stories instead, and I merely referenced issues where Jason appeared in a brief cameo. Oh, and I did the same for his appearances in the Crisis on Infinite Earths and Legends events.

Yeah, even if you read Battle for the Cowl as Jason having a full-out psychotic break (which I’d say is the second-most common reaction among Jason fans after “WHAT ARE YOU TALKING ABOUT, THAT NEVER HAPPENED, LALALA I CAN’T HEAR YOU”) there’s stuff in there that I just can’t see him ever being far gone enough to do, and the stuff with Selina and Damian tops that list. I get the impression that in his early days as Red Hood, Jason plays rough with the other Bats and tends to think of it as fair play “they can take it” stuff as long as nothing permanent is done, but this just felt… off.

(Also, I’m a huge fan of Jason as Robin. I first met him as Red Hood and was fascinated, and when I went back and hunted down his post-Crisis Robin issues I really enjoyed them. The pre-Crisis stuff is more hit and miss in my opinion, and I’m still going through it, but it’s historically interesting and there’s still a lot of good stuff.)

I thought that the GA arc had some interesting stuff in the Jason vs. Mia fight

I do wish there had been more of a follow-up on this story. It’s one of those things that might have been a setup for another planned story, but Battle for the Cowl seemingly cut off any plans that Winick may have had for Jason going forward.