Hello everyone! Welcome to Week 1 of the New to DCU Book Club, where we will be reading and discussing comics currently coming the DC Universe Infinite. We will be discussing stories big and small. Both Batman and Adam Strange, while making sure that you have ALL the context that you need to enjoy the story. You are missing as few details as possible, and that you will be able to understand everything. We will also be following a reading order I wrote to read the stuff you will need to enjoy Future State and Infinite Frontier. You can see the reading order HERE. As the weeks progress, we will read books including

To start with, we are reading the beginning of a NEW Batman run with Batman Vol. 1 “Their Dark Designs.” The run is focused on adding new ideas to DC and doesn’t require much context at all. Obviously, there are some things that you should know about, but my goal is to make it as easy of a reading experience as possible. 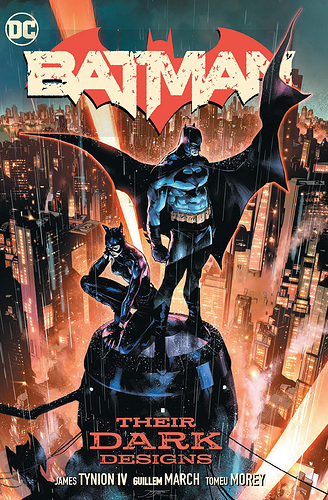 Onto the book itself.

Read Batman (2016) #86-94. There are a lot of new characters. If I didn’t discuss the character in the context section, it’s most likely new (or obscure like Lucius’s daughter and not important).

Reading Order checklist: (We will cover almost everything here, but we will miss a couple) 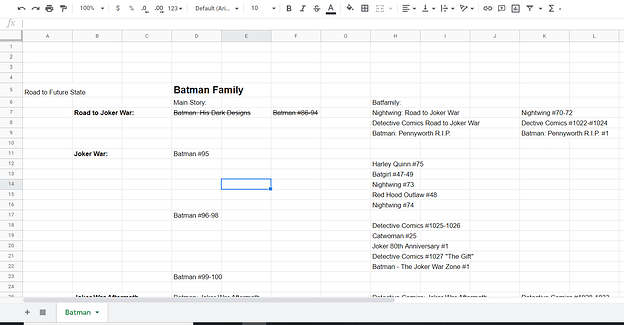 Dang, @Nathan.Payson…the amount of work and level of detail you put into this is amazing. Thank you for doing it.

I’m trying. Just finishing writing next weeks now and death metal is well… but I want to make sure everyone can get an enjoyable experience regardless of their knowledge level. Some people don’t know who Nightwing is for example, so giving some detail is useful. Or a “I know who the joker is, but I couldn’t give you the comics history of him”, so I tried to give it where necessary. It also helps when you have 6 weeks w/o school to write it down.

Welcome back to this dandy club!

I started reading more regularly the monthly titles with the start of Tynion’s run, so I’ve read all this before, but only once. Going to be fun to go through this stuff again.

Yeah. I’m really thankful that DCUI is happening when it is because there’s a bunch of great monthly titles that excited me when they came out. Especially since they are decent starting points (unlike the Year of the Villain event).

Oh, good! It’s back! This club will come in handy once I officially retire the club-based adventures of Jason Todd in a few months (upon reaching last month’s Red Hood issue 52). I can just tell everyone, “Go to Nathan’s club for the newest stuff.”

That’s one way to do it! (We won’t be reading the end of Red Hood: Outlaw though, so our first Red Hood book will be the Joker War Tie-in) and then #2 will be the Future State stuff and Batman: Urban Legends.

Thank you for this club! I have been nowhere near caught up to the present in comics, so I am glad to have this incentive to read the new stuff.

@scoop001 I can’t wait to continue to read current comics with you too!!

I am not sure how the Designer is supposed to be able to create a shortcut for this process, however, other than helping them plan it out.

I got the impression that one of the big things that change over time is the vision. I thought the Designer had the resources to give them what they needed to do each of the different things, but I could easily be wrong.

I honestly didn’t care much for the new villains. Mr Teeth is a 3, Gunsmith a 4, the Designer a 5, and Punchline is a 6 since she succeeds at taking down her targets.

I’d give Punchline an 8 personally. I think she’s intriguing and does a good job differentiating herself from Harley Quinn.

Can’t wait to hear your thoughts!

Stopping by soon; catching up on @JasonTodd428 JSA first this afternoon. BTW have you heard from Aurora the past few months?

Well I just finished Batman #86, and I really like it. Tyrion has been one of my favorite writers so I like where this is going so far. Tom King was always a little too stylistic which for me sometimes worked, and sometimes did not, so I like this new direction

I’ll have to pass on answering Question 1 until I read more of these delicious issues, but here’s a partial answer on #2 concerning thoughts on the villains for this run:

I was so happy to see this mix of established Big Bads along with oddball eccentric “stripped down” henchmen like Mr. Teeth and Gunsmiith. It was sad to see them all seemingly taken down mainly off camera in this issue.

I really liked the continuing tribute to the missing lost friend Alfred. We’ll be doing a “listen a long” next month of early Superman Radio Show episodes, and one or two will feature Alfred along with Robin and Batman- it was a thrill to hear Alfred portrayed so long ago like that as I reviewed the audio, and so haunting that he is gone now.

Some last thoughts on the first issue: Tony S Daniel, woo hoo! I have always enjoyed his artwork, even when his work was a tad rough around the edges prior to New 52, and I also enjoy his writing of Batman, but wow has he evolved and grown as an artist now! This cover and some other panels just pop off the page with artistic and individualist vision excellence! 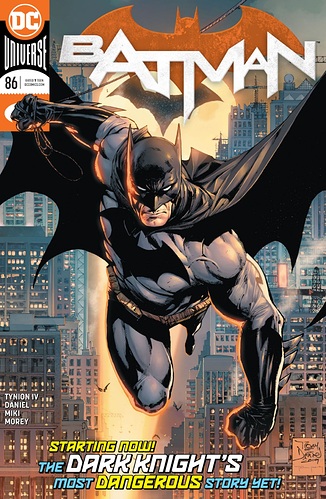 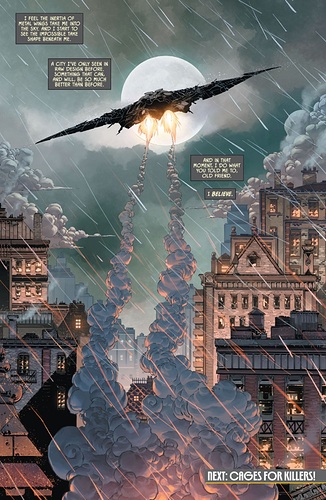 Oh, concerning Bruce’s design for Gotham and his heavy-handed implementation of it city-wide: caution Will Robinson! It’s never good when one person forces their vision on the masses, no no no no…

Punchline was quite enjoyable, but I wonder if that didn’t have more to do with Harley than with her. It was the banter between the two that I really thought was a lot of fun. You know if Harley is pointing out you have issues you’re probably in trouble.

I am so not a fan of the Penguin being a mass murderer. I much prefer him being more of a financial bad guy running clubs, that kind of stuff, sort of the Red Hood version. This guy is a bit too much like the Gotham TV series version.

I do like the fact that at the end of the issue, unlike every other villain, he’s actually fighting against whoever is coming to collect. 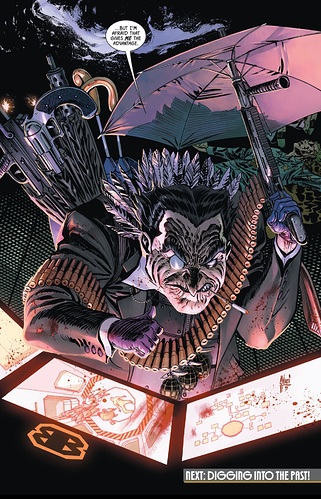 Everyone keeps mentioning the Joker;I’m hoping that the Joker is not the Designer.

I’m hoping that the Joker is not the Designer.

You’ll see as the arc goes on, but this heavily leads into Joker War for a reason, but the designer is an original character.

Just read the first issue. Hope to do two more before bed

Feel free to take your time. I’ll see be here to answer questions and give my thoughts on your comments 2+ weeks from now.