Hello everyone! Welcome to Week 2 of the New to DCU Book Club, where we will be reading and discussing comics currently coming the DC Universe Infinite.

This is our first week where we are reading issues from different stories. This week we are reading Death Metal #1-2, Batman #95, and Strange Adventures #1-3

Death Metal is VERY context heavy as it’s the end result of the two years of set up. If you are new, go in expecting to be a little confused at times but reading my guide for the BARE basics should be enough to understand the gist. 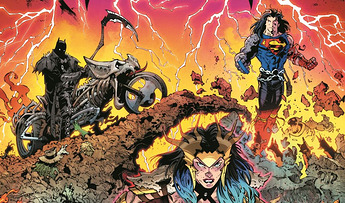 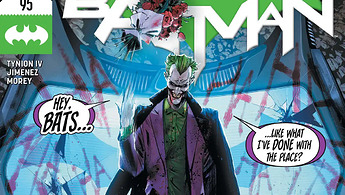 image1200×680 316 KB
Strange Adventures #1-3 require nothing really. Adam Strange is a fairly obscure character and as such the issue is written assuming you know very little. 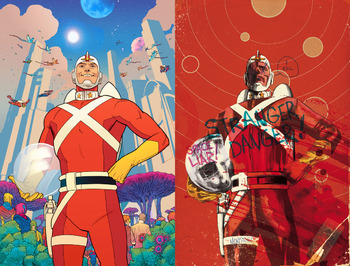 Questions:
Death Metal #1-2
Is this your first time reading it? If not, how does it feel coming back to it? If yes, what are your initial thoughts? Did the context guide help?

Do you like how Snyder skips over a big battle, but tries to fill in gaps with the narrative?

Who is your favorite Batman introduced in these issues?
What do you like (and dislike) about this alternate earth so far?

We will be reading Death Metal #3 in a couple of weeks.

Is this your first time reading it? If yes, what are your initial thoughts? Did the context guide help?

What are your thoughts on Punchline? Are you enjoying her, or is she kinda mediocre?

What is your favorite moment?

Context: Adam Strange is a human who got ahold of a jetpack and fought a war on the planet Rann. He got married. That’s what you need to know!

Please only read what you want to read. Also to encourage discussion, please format all comments like my comment below so that people can engage discussing the weekly books they read and ignore the books they haven’t read yet.

(Fake) Death Metal #1 Thoughts for the Note for everyone

These are my spoiler thoughts here. Type them here so when people read that issue they can click on the comment and join the discussion. It’s the best way to create a spoiler-free environment if you have only read 2 of the issues.

These are my strange adventure thoughts.

You can blur the words by using htlm text. Simply type in [spoiler] before the spoilerly comment section and [ /spoiler] after the stuff you want to blue without the space between [ and / to hide your text.

Out of continuity stories: 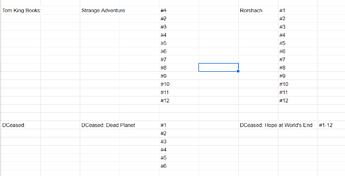 And I haven’t read any of these issues for this week before.

Nice to see the New to DCU Book Club ridng again. (Or should that be New to DCUI?)

Who knows, maybe the One Shots Book Club may emerge from the ether some day soon as well @Awesome_Squid

Death Metal 1-2
This is my first time reading this story. The context guide did help me have some idea as to what was going on. I am not sure what I think of this story so far. I am not a big fan of the Batman who Laughs so far.

Batman 95
Yes, this is my first time reading this. I read last week’s Batman issues, so I was aware of the context already. I am still not a big fan of Punchline. The flashbacks with Alfred were probably my favorite moment.

This is my first time reading this story. The context guide did help me have some idea as to what was going on. I am not sure what I think of this story so far. I am not a big fan of the Batman who Laughs so far.

Death Metal was going to be more confusing then the rest. There’s a lot of stuff going on that can feel very overwhelming. The context is a little convoluted and poorly explained. (Somehow Batman #95 has to take place after the JL have been defeated and the BWL and Lex go to war, but before Death Metal which isn’t possible), but it’s an important story to understanding the universe heading into Infinite Frontier.

These questions are purposely trickier to answer because they are about pointing out what Tom King is trying to do. The story is less straightforward and King tries to do a lot of smart literary moments when he writes. There are no right answers to these questions, and a tease of unconventional thinking is definitely possible. I have my own thoughts that I will share later in the week, but I want to give others time first.

One thing that might help is that there is a big contrast between the Rann storyline and the Earth storyline in many different ways (including the artist). This is intentional. King wanted to explore the difference between truth and reality. (Which is a very narrow difference) we will see later how he handles it, but I am intrigued to see how he does it.

Death Metal:
I really like this quite a bit. This is my first time reading, although I was pretty caught up with everything else leading up to this. I just read Hell Arisen first before jumping in. I can’t think of anything I would add to your guide above, Mr. Nathan, since you say you’ll be filling in more about Wally later.

I like how Snyder just jumped in after the evil Batfolk have already won and we’re all post-Batpocalypse. It makes things seem even more hopeless, like the heroes got beat so soundly there’s not point in even showing it.

My favorite Bats have to be the sentient car and the T-Rex. Especially the T-Rex. His tiny arms defense giggled me (Is that a spoiler? That’s not a spoiler, is it? T-Rex’s have tiny arms, people).

Batman #95:
Yep, first time reading all of this. I liked it a lot. Every major writer should get a major Joker story to tell, and Tynion is solid so there’s a lot to enjoy here. Punchline is more mediocre to me this time around, so I think my initial enjoyment of her before had a lot more to do with Harley’s banter than anything else. I wonder is works more as a foil than a character in her own right.

This is the one I’ve been most looking forward to, given how good Mr. Miracle was (although I still need to go back and finish the last few issues on that). It was worth it, I thought this was really well done. The questions being constantly thrown to Mr. Terrific help show how obsessive he is regarding his knowledge, and shows the ready just how really, really intelligent he is. Everything else Nathan mentions seems to be to completely distinguish between what Adam reports his adventures to be on Rann vs. the much more grounded reality the present story is taking place in. I guess that helps us believe that what happened before may be just that: nothing more than a story. Also, I sure do want to know where the daughter is now!

I can’t think of anything I would add to your guide above, Mr. Nathan, since you say you’ll be filling in more about Wally later.

Thanks so much!!! I’m so glad that I’m doing a good job with the recaps where neccessary.

My favorite Bats have to be the sentient car and the T-Rex.

Um…His name is B-Rex… (We will read his origin story later) but it’s not a big spoiler. Snyder had discussed it alot before the book even came out in press interviews.

I wonder is works more as a foil than a character in her own right.

I’ll be curious to see what you think of Punchline #1 when we get there, because I think it will help you understand what’s so interesting about the character, but I do think she currently works better with a foil. We will talk about her 2021 stuff in September (HOLY F*** that’s a long way away…) when Joker #1 comes out and she gets the back-issue, but I think there’s a great plan coming.

seems to be to completely distinguish between what Adam reports his adventures to be on Rann vs. the much more grounded reality the present story is taking place in.

DING DING DING!!! Some things of interest include the lettering. When violence occurs on RANN. The lettering is full of sound effects and full of action. But on earth, there are no sound effects, the action is more subdued, and the “heroism” is minimalized. I think it goes to show that the Rann stuff is Nothing more than a story, but I do want to note that these events can be “real” and not be fully “Truthful” You can omit details to make your true story more self-promotional.

For the record, I’ve only read what you’ve read.

Cool - now I’m curious what I’ll think of her, too…

Strange Adventures 1 and 2 so far-
Question 1 concerning the questions Mr. Terrific answers the entire issue, it was a bit arrogant, the character’s way of telling everyone around him he’s knowledgable. I’ve never equated memorization ability with IQ, and neither do IQ tests. I did however enjoy that the quotes had to do with favorite historic figures of mine like Kierkegaard and Bobby Fischer.
T King might use some of this to point to plot developments, but this was supposed to be randomly generated questions.

The two techniques referred to in your other two questions, changing the scene every page and using different coloring between Rann and Earth to me points to anything shown on Earth is true and solid, anything depicted on Rann is very interpreted and full of either deliberate lies or self deception on Strange’s part. The Rann scenes I took to be excerpts from the book

Looking forward to reading the third issue maybe tomorrow, then back to week 1 Batman lol.

Question 1 concerning the questions Mr. Terrific answers the entire issue, it was a bit arrogant, the character’s way of telling everyone around him he’s knowledgable. I’ve never equated memorization ability with IQ, and neither do IQ tests.

Memorization and IQ aren’t the same thing, sure, but I view it more as Mr. Terrific testing himself. He’s matching “peak intelligence” with “peak physical activity” to show how he strives to be perfect. It never seems like he’s bragging about his knowledge.

I hear you. To me the fact he does it so openly in public 24 hours a day makes it showy, but also I think it’s really is in harmony with other recent versions of Mr. Terrific, where he’s meant to be an arrogant high-level intellect, like in New 52 World’s Finest or the Terrifics, and it nicely adds to the tension between the characters of the story.

Where is the link to join?

I think this is it.

I finished reading Strange Adventures #3 this morning. The artwork and coloring are a real joy.

Concerning the story, it’s a unique thing to read something where you know for sure some of it is someone’s delusion. Reminds me of when I used to watch the series Lost. Half the time I’m wondering if Alana is even there and alive, but then you have a scene like the end of issue 3 where she sneakily has a photo taken of Batman talking to her privately.

I do find myself thinking, why would Alana pick up smoking of all things from Earth? I guess it’s part of T King’s portrayal of her as a harsh cynical entitled person who likes to blow toxic smoke in people’s faces horribly.

I’m enjoying overall the story / art. It is something I have to read slowly over time. I can only take so many Greek tragedies in 2 years, Avengers Infinity War / Endgame was depressing enough at times, this is absolutely heaping spoonfuls of depressing as well lol.