Yep yep! As @darkstarz mentioned, feel free to shoot us a message with any questions or concerns you may have! You can see the community is also super helpful if you have anything general to ask.

Thank you for that information, I will do the same, are there rewards for ranking up?

Thank you so much, how do you level up your rank? will there be any NFT drops to purchase comics or characters? does leveling up help you within the community? What kind of perks are out there for leveling up to a certain rank? Sorry for all the questions, in alot of NFT Communities.

First off I like the concept of having a quirky dynamic duo of Stephaine Brown and Casandra Cain getting their own comic together. I hope they do it right.

Actually in the last few issues of Nightwing Babs states she has three names referencing batgirl, oracle, and Barbara gordan. however in the future state she does not go by batgirl, she is going by oracle even in batsuit, and Cassandra was officially called batgirl (in rebirth) in Infinite frontier 1. However Spoiler is still going by The Spoiler, she is now wearing a hybrid suit of her New earth batgirl suit and her modern Spoiler suit. Babs just suited up in her new suit in Nightwing 84, her last batsuit got destroyed by a talon (imposter?) in joker #7. however, in Future End there was a team of batgirls consisting of Tiffany fox, Stephanie Brown, Cassandra Cain. so there have been multiple batgirls in the field in a mainstream possible future. then in Elseworlds like Bombshells there where the Bat-girls
Babs new batsuit: 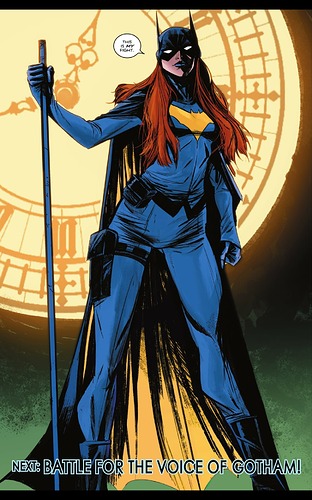 However, Ryan Wilder may be introduced in this series as another batgirl as there is a character that looks a lot like her in issue 5 of batman urban legends. 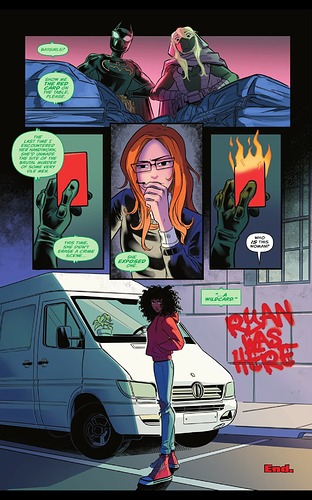 First of all, whether you like it or not is irrelevant to me. I wasn’t speaking for you. I was speaking for me. End of that story right there.
And second of all you just proved my point. Barbara “has 3 names” because DC can’t commit to her either as Batgirl or Oracle. Still using the batgirl suit and depending on what the writer wants will use her as either Batgirl or Oracle. Steph using this spoiler name but considered a “batgirl” because DC can’t commit to her one way or the other. Cass… well she’s the only one that isn’t so if you ask me she should be Batgirl and they should call it Batgirl/Spoiler like they do with every other duo book. And this doesn’t even get into the fact that DC is making a habit out of multiple heroes using the same name simultaneously because they want to grow the universe but don’t want to age their characters.

will there be any NFT drops to purchase comics or characters?

To date, I haven’t seen anything about NFT but I personally haven’t really looked for anything either.

how do you level up your rank?

We don’t really have ranks here, unless you are trying to get into Iceberg Lounge and for that you have to do certain things (there might be a post in the Iceberg Lounge?). We do have badges though! You get those from random things ranging from posting to other events in the DC Community. You can check out my profile to see some of the badges. I know there was one that you have to appear every day for a year. Another is for making a wiki and so on.

DC Fandome is coming up next weekend and if they were going to announce anything regarding NFT I imagine that would be the time when they do that.

how do you level up your rank?

Great question @HollywoodCoke5! Check out Understanding DC Universe Clearance Levels to learn more about how “leveling up” can help you unlock certain permissions within the forums

And if you ever need anything, please don’t hesitate to reach out to the moderators! We’re here for all of our wonderful community members, new and old

I really hope this leads CloonRad to eventually launching a new BoP book. It’s been too long since we’ve had a strong creative team on these ladies.

I would be very happy to see a new BoP book. They keep teasing it like in the Black Canary story Solo in Batman Urban Legends.

I’m determined to speak it into existence lol. I keep tagging DC on Twitter to show there’s demand for it.

Have you checked out Deathstroke Inc? It has a BoP vibe to it. I mean, it is Deathstroke and Black Canary, but that vibe is definitely there.

I haven’t, but I’ll give it a try when I get back to my LCS.

First issue of the backups leading into the ongoing with the full writing and art team of the ongoing dropped in today’s Batman - anyone have a chance to pick it up yet?

I just started reading Batgirl: Year One a few days ago and am enjoying it, so I am definitely excited for this series.

My most anticipated book in a long time!

That’s really awesome to hear! Welcome back, and I’m glad you’re excited for this.

I just started reading Batgirl: Year One a few days ago and am enjoying it, so I am definitely excited for this series.

My most anticipated book in a long time!

Me, too! Though Robins is up there.

That’s really awesome to hear! Welcome back, and I’m glad you’re excited for this.

Thank you! I haven’t been reading much do to life stuff in the past year but Fandome got me wanting to jump back into the swing of things asap.