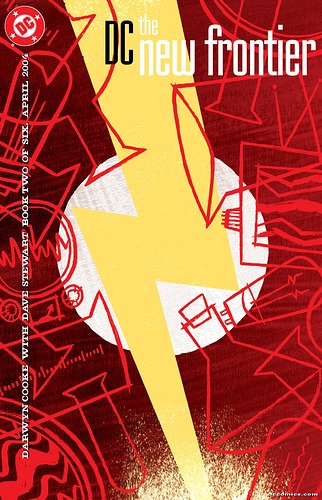 We’re reading through New Frontier. Since these issues are pretty long (like, almost 70 pages) we’re only doing 1 issue a week. Please avoid spoiling anything from issues beyond this week. If you missed last week, you can check it out here

Barry seemingly letting Cold die in the explosion of his Cold gun? Ted Grant dating Selina Kyle? Though I guess I just need to keep remembering this isn’t in the same universe as everything I know.

Would you side with Superman or Wonder Woman?

This is a hard one. It depends on how I found out. Diana did what she did because she saw what they suffered. Kal did what he did because he only saw the aftermath. Overall, I say I’d side with Diana. But it’s not an easy decision.

That’s a hard one, because the chapters are all good in their own ways. Chapter 4 is much more moody and introspective, between J’onn’s introduction to Earth, the confrontation between Superman and Wonder Woman, and the action of Batman and “John Jones” fighting evil cultists.

Meanwhile, chapter 5 is not only more fun and with more superhero action, but also has more direct interaction with the historical element of this story, with the fight between Ted Grant and “Cassius Clay,” not to mention the little appearance of Frank Sinatra. But it’s not all fun and games, as Hal’s conversation with Ace about his post-traumatic stress shows.

I think I will go with 4, because it’s a little more substantive to the plot and has a lot of great character moments.

Like someone else mentioned, I was surprised that I never noticed that Selina was dating Ted Grant in this moment. I mean, I can kind of see it in the sense of they’re both “cats,” but as someone who is a bit of a Bat/Cat shipper, it just feels…wrong. Between this and their setting Selina with Slam Bradley in the Brubaker run of Catwoman makes me wonder if maybe Cooke just has a thing for pairing Selina up with older men…

Would you side with Superman or Wonder Woman?

Well, not to get too political, but I don’t side with either in the sense that the US shouldn’t have gotten involved in Vietnam in general.

But placing that aside, I’m definitely more sympathetic to Wonder Woman’s side of liberating the women. You could maybe say that she could have stopped the women from killing the men, but who’s to say that if she saved their lives if they would have come back when she was gone? Then at best, the women would have killed the men anyway, or the men would have taken them prisoner again. It’s a tough call, but it seemed like the least worst choice.

I’m a sucker for Martian Manhunter, so Chapter 4. The transforming into characters he sees on TV is great.

Most surprising thing to me was that a party including Batman, Green Arrow, Catwoman, Wildcat, Black Canary, and who knows who else, gets robbed and the only one to show up is Flash.

I’d like to think I’d side with Superman, but truthfully I think I’d be more inclined to agree with Wonder Woman. I mean, if I’d been in her position the men likely wouldn’t have just been disarmed before the women were freed.

Most surprising thing to me was that a party including Batman, Green Arrow, Catwoman, Wildcat, Black Canary, and who knows who else, gets robbed and the only one to show up is Flash.

…You know, now that you mention it…

I mean, in a narrative sense I get that this is really supposed to signify the dawn of the Silver Age, and this is Flash’s moment to shine, but you would think that at least some of them would be resisting. Maybe Ted tries to throw a swing and he gets shot in the arm by Cold, or Bruce is trying to find an opening so he can get changed into his Batman gear.