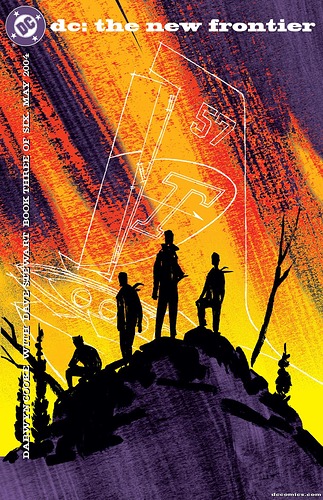 We’re reading through New Frontier. Since these issues are pretty long (like, almost 70 pages) we’re only doing 1 issue a week. Please avoid spoiling anything from issues beyond this week. If you missed last week, you can check it out here

Seven. Really enjoyed the bit in the underground Ferris facility. It’s also interesting to think about Martian Manhunter going to the movies to enjoy the thoughts and feelings from the other people.

I suppose it shouldn’t be surprising, but I wasn’t expecting Batman to find out about Manhunter. Especially given that the government hasn’t found anything on him in 3 years.

I enjoyed seven as well. I found the first chapter hard to follow, mostly because if characters don’t say their name or get some sort on intro I have no idea what is happening.

Batman is always a surprise. But everything slowly becoming about Mars is surprising too. I wonder in J’onn will find out about the trip to Mars.

What do you think about the Challengers of the Unknown?

I don’t know much about them but it was cool to see.

It was nice to have Hal again take more of the spotlight, especially for this club. It kind of reminded me of the bit from Jeff Goldblum in Jurassic Park. “You’re, uh, you’re going to have a Green Lantern in your Green Lantern book club, right?”

I forgot that John Henry Irons was technically in this story. While his story is so tragic, it’s cool to see them do more than just use the older 40s-60s era heroes and see them reimagine some of the newer heroes in different ways.

I also wonder if this inspired the Watchmen TV series at all, since John’s origins here feels evocative of…a certain other character’s in that show, without getting into spoilers.

…They’re okay, I guess? I dunno. I had read a little bit of them in the past, specifically “The Challengers of the Unknown Must Die” series that was actually the first collaboration of Jeph Loeb and Tim Sale. They have an interesting hook, I like how they really play with more here the sort of post-traumatic stress and survivor’s guilt that comes with what they went through, but there wasn’t enough in this story to get a real clear feeling of them, if that makes sense.